JUST FOR THE L OF IT: TRUE BROWNIES SHUN PUBLICITY AS THEY PLUNGE

When the L Street Brownies take their annual New Year's plunge into Dorchester Bay at noon, the walk-ons will far outnumber the bona fide club members who consider a dip in winter's frigid waters to be more than a photo op.

If club estimates are right, fewer than 10 legitimate Brownies will scramble toward the ocean, outnumbered by hundreds of one-time thrill-seekers as the TV cameras roll and newspaper reporters note the awe, shock and condolences muttered by a swarm of bundled onlookers

Club president Paul Levenson thinks the bigger the crowd, the better. But Leo Simonetti, a longtime Brownie, said you won't find him at the bathhouse today. "There's too many phonies who come down to get their picture taken," he said.

The harbor is the cleanest it has been in years, but only 35 members remain from a club that counted about 150 as recently as a decade ago, Levenson said. And the prospects for recruiting more swimmers from the booming running and weightlifting programs at L Street appear as murky as harbor water on a summer day.

"The young kids don't go in the water, they go for the weights," McDonough said. "Swimming isn't something that young kids get psyched up about. I guess they want to beef up their muscles to impress the girls."

Only a half-dozen L Street swimmers take the waters throughout the winter, a club member said, and most of them are long past retirement age.

Still, they show courage under chilliness that awes weekend warriors of all ages. The L Street Brownies also embody a jocular bonding that recalls a sepia-edged era when socializing was as much a part of athletic clubs as exercising.

"It's camaraderie, it's tradition, it's making people happy, and it's friendliness," said Levenson, 79. "The camaraderie, really, is contagious. Maybe some of the guys who use the weight room will move over and join us."

McDonough, of Malden, is a hard-core member of the L Street Swimming Club and Brownies. The retired Somerville police detective has been swimming 220 yards a day in 38-degree water this week, but the hordes expected at L Street this morning will probably keep him away.

"It's gotten so big now. They'll have hundreds down there," said McDonough, a South Boston native.

McDonough extolled the benefits of a regimen that he said has kept him cold-free for 10 years. "Once you get going, you don't notice it. And you feel like a million bucks," he said.

Simonetti prefers to take his swim alone or with his pals, and it's a routine that he's perfected over 30 years, 52 weeks a year, six days a week.

"I find it exhilarating," Simonetti, 68, said of his frigid dunks. "You feel good, and it keeps you young at heart. Hey, it's better than taking up booze or drugs."

One inducement to join the club, Levenson said, is that "the price is right." Gaining access to the L Street facilities costs only $20 a year, and joining the Brownies sets someone back only $1 more.

Today's swim is the club's biggest annual fund-raiser. For $1 membership cards, the curious and the hung-over will travel to L Street "from all the New England states" to scamper toward the water at the sound of Levenson's whistle.

Levenson concurs with Simonetti that most of the revelers are "fakers," but he welcomes them "with the New Year's spirit." Besides, the proceeds from a few scant minutes of shouting and shivering will pay for the food, doughnuts and coffee that grace the club's meetings throughout the year.

Despite a declining membership, the L Street Brownies will have another shining moment under the spotlight today. And even if most Brownies will shun the event, the homage will be real.

But tomorrow, after the TV cameras and reporters have vanished, drop by the clubhouse to see what the fuss is about. If you're lucky, Leo Simonetti and Vinny McDonough will be there, striding into Dorchester Bay for a brief, brisk January swim.

It's what they do. They swim. By themselves. In the winter.

My mother, Frances Vincent Portalla won this swim in 1927? ( i think that was the correct year) She also was involved in many other area swims sponcered by the L st Bath house. Is there a list of names of past winners? Is there any information on any of the early races? I guess what I am looking for is a History of these races. Any info would be greatly appreciated. Thank You Wiliam J. Portalla
Boston Light Swim

William, the people that organize the annual race (101st year in 2009) are updating the event web site. There will be a history page that will cover the people and event from 1908. Expect the BLS history page to be up in a few months.
Login

On this day in 1904, the L Street Brownies held their first New Year's Day swim in Boston Harbor. Every year since then, a crowd of swimmers and an even larger crowd of onlookers has shown up to watch men—and since the 1980's, women—begin the year with a swim in the icy waters of Dorchester Bay. Keeping up a tradition introduced by European immigrants fond of cold water dips, the most dedicated L Street Brownies repeat this ritual every day of the year. Named for the beach where the club meets and for the nut-brown skin color many of the members develop from daily exposure to the sun, the L Street Brownies is the second oldest cold-water swimming club in the country.

Every year on New Year's Day, swimmers have been plunging into the icy waters of Boston Harbor for well over 100 years.

It's been a New Year's Day tradition in South Boston since 1904; on the morning of January 1, the L Street Brownies go for a swim in Dorchester Bay. Hundreds of spectators, newspaper reporters, and television crews cheer them on. The next day—and every other day of the year—the onlookers are gone, but the Brownies return to the beach in front of the L Street Bathhouse and plunge into the icy waters of Boston Harbor.

Some accounts trace winter swimming in South Boston to 1888; others believe it began even earlier, in 1865. The practice was probably introduced by European immigrants who believed that cold-water dips, alternating with sauna or steam baths, promoted good health. Many Brownies give their winter swims credit for their strong immune systems.

The L Street Brownies were officially organized in 1902. Not to be confused with the branch of the Girl Scouts, the club took its name from the L Street beach where its members swam and from the nut-brown skin color many of them developed from daily exposure to the sun.

...the Brownies experienced new growth when, in the 1980s, women were allowed to join. 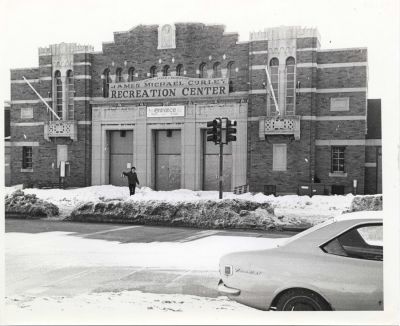 The first record of a New Years Day swim dates from 1904, when a photograph was taken of the event. The president of the club has joked that the club was founded and then the members "sat around drinking and asking what they should do until two years later when someone said, 'Why don't we go for a swim?'" In 1979, the club decided to observe 1904 as the birthday of the New Year's Day swim. If documentation is ever found for earlier swims, the Brownies could claim to be the oldest cold-weather swimming club in America, a distinction presently held by the Coney Island Polar Bears of New York.

Built in 1931 by Boston's populist mayor James Michael Curley to replace an older facility, the L St. Bathhouse was located at the intersection of Day Boulevard and L Street in South Boston. Named the L Street Bathhouse (and later re-named the Curley Community Center), the building provided hot showers and recreational facilities to the city's working people during the most difficult years of the Depression. The bathhouse remained a popular gathering spot during the years when Boston Harbor was considered safe for swimming and before air-conditioning helped people cope with the summer heat.

The practice continues into the twenty-first century, with the annual swim described as a ritual cleansing by some of the participants. Membership in the club costs $1.00 and averages between 35 and 50 people, with a much larger crowd on New Years Day. On January 1, 2004, the centennial of the New Year’s Day swim, 500 men and women plunged into the icy waters of Boston Harbor. On January 2, some 40 or so dedicated members of the L Street Brownies returned to an empty stretch of beach to repeat their harbor swim. One Brownie remarked that a good cold swim offers holiday revelers a sobering way to start off the New Year, but the numbers who show up for the daily swims is small and shrinking.

When Kevin White was mayor in the 1970s, the women's half of the building was converted into temporary classrooms for high school students. The city promised that it would be returned in three years, but the classrooms gave way to municipal offices and then the bathhouse fell into disrepair and was vandalized. In the early 1980s, the Mayor proposed closing the facility, but a public outcry, including a protest by the Brownies, saved the bathhouse. Women then led a four-year campaign to reclaim their half of the bathhouse. Under Mayor Raymond Flynn, the entire building was renovated and made into a fitness center, the Curley Community Center. Most of the other bathhouses were torn down to make way for new development.

The L Street Bathhouse served as the headquarters for the New York delegation to the 2004 Democratic National Convention.

Some Brownies lament that the weight rooms and exercise equipment that are available at the bathhouse have cut down on people's interest in swimming. The membership is aging, and some fear that the club may not exist in another 10 years. Others point out that the Brownies experienced new growth when, in the 1980s, women were allowed to join. However, interest in the New Year’s Day swim is lively. Annually, up to 1,000 people, who are encouraged to wear creative costumes, show up to take the plunge.

The L Street Bathhouse served as the headquarters for the New York delegation to the 2004 Democratic National Convention. The longstanding rivalry between Boston and New York—and between the Brownies and the Polar Bears—made this an appropriate venue indeed.

L Street Bathhouse offers gyms, showers, and other amenities for a small membership fee. There is curbside parking available along Day Boulevard and easy pedestrian access from many South Boston neighborhoods. Publicly accessible via MBTA's City Point buses #9 or #11. These leave from the MBTA Red Line's Broadway Station.