How is anyone to sit down in cold blood and attempt to give any lucid comment upon what happened at The Country Club today in the final 36 holes for the National Open golf title? Every thought comes back to the thrilling finish of Francis Ouimet, whereby he tied Harry Vardon and Edward Ray for the title.

We have seen, in other sports, the hero of the day cheered to the echo and hoisted upon the shoulders of his admirers, for a jerky ride of fame. We have seen it on the football field in recognition of the kick that saved the day or won the game, we have seen it on the diamond for the man who has won the game with a homer or the pitcher who has struck out the opposing batsman with three on base and two men out, one run needed to tie the score. But such enthusiasm has been foreign to America's golf links until the modest Woodland boy, Francis Ouimet, carried the gallery completely off its feet at The Country Club and brought about the most enthusiastic demonstration ever accorded a golfer in this country or probably in the world.

Quoted in The Greatest Game Ever Played: Harry Vardon, Francis Ouimet, and the Birth of Modern Golf, by Mark Frost (Hyperion, 2002).

"The Greatest Game ever Played"

The book mentioned in the Sources for this Mass Moment has been made into an excelent movie. I'm pretty sure that it is out on DVD.
"The Greatest Game ever Played"

I watched "The Greatest Game Ever Played" and was moved by the story. I immediately got online to see how true the movie lined up with the facts of this story. What a wonderful and accurate depiction of hope. I love this story, and am glad the it was made into a movie. Dreams really do come true!
"The Greatest Game ever Played"

I haven't read the book but I agree the movie was excelent and very inspirational.
"The Greatest Game ever Played"

The movie follows the book fairly closely however there were a few area's where Disney took license. This is still one of the under rated events in American history. It is looked upon as a great moment in sport which it is, but even more important it was some one from a very working class enviroment smashing through the gates into the play ground of the very rich. Think it about in the years that immediately followed this event the number of golfers triple and you can bet your boots these numbers didn't all come from the wealthy ! The fact that former President Taft was chairman of this event, witnessed it and made sure it got all the publicity it deserved didn't hurt either. But it was like the last step needed to set off America's middle class explosion. ------------------------- Oneunder http://www.thegolfballfactory.com
Login

On this day in 1913, at The Country Club in Brookline, 20-year-old Francis Ouimet became the first amateur to win the U.S. Open Golf Tournament. Growing up in an immigrant family across the street from the prestigious course, Ouimet taught himself to play, read everything he could lay his hands on, and carefully observed the players while he caddied for them. As a teenager, he would play solo rounds in weather too nasty for the members. The 1913 Open drew a larger crowd than any other previous golf match in the United States. When Ouimet beat his idol, British pro Harry Vardon, by five strokes to take the title, it changed the history of golf. In the decade that followed, the number of players in the country tripled.

Before going off to school in the early mornings, he would sneak onto the grounds to play — in bare feet, so as not to mark up the greens. 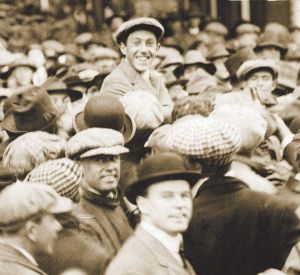 Most experts agree that golf originated in Scotland. In 1457 King James II and the Scottish Parliament prohibited it, on the grounds that golf diverted men from archery, an infinitely more useful skill should the country need defending. The ban had little effect, however, and three centuries later, James's descendant James VI was himself an avid golfer.

Golf began to gain popularity in the U.S. in the early 1900s as the number of people with time and money to pursue what had been a gentleman's game grew. In 1900 the country had about 400 golf courses; all were private. As far as the general public was concerned, golf was reserved for the wealthy, and Francis Ouimet was poor. The son of a French-Canadian immigrant father, who struggled to maintain a foothold on the bottom of the economic ladder, he was four years old when his family purchased a house on Clyde Street in Brookline, directly across from The Country Club's 17th fairway and green. Young Ouimet was hardly a candidate for the Golf Hall of Fame. From an early age, however, the game completely enthralled him.

Merely being in the presence of the legendary Harry Vardon made the younger man's knees shake, but once on the fairway, Francis Ouimet was as focused as anyone who ever swung a golf club. 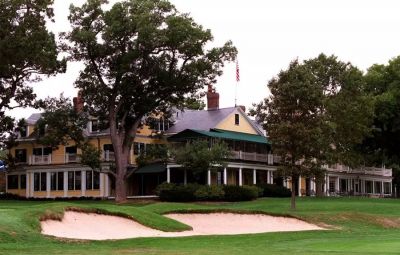 He collected lost balls in the woods and weeds around the course. The first golf club he owned was one his older brother got for him in exchange for that cache of balls. The brothers practiced on "a course" they mowed in the overgrown cow pasture behind their house. When he was nine, Francis began working as a caddie at The Country Club. This gave him the opportunity to watch the best golfers up close and to memorize every inch of the course. Before going off to school in the early mornings, he would sneak onto the grounds to play — in bare feet, so as not to mark up the greens. On the few days he had off in the summer, he traveled two hours to Franklin Park, the only public golf course in Boston, and played until the last streetcar left for Brookline.

Affable, invariably polite, with an all-consuming passion for the game, Francis soon caught the eye of the club's members. The caddie master was so impressed by the teenager's skill that he allowed Francis to play if a member invited him — something club rules prohibited.

When he was a junior in high school, his father insisted Francis drop out and finally begin to do "something useful" with his life. He worked at a drygoods store before a stroke of good luck helped him land a job at a sporting goods store owned by the future Baseball Hall of Famer, George Wright. Wright's support would prove invaluable.

Winning, he told the crowd, "is far beyond anything I ever dreamed to do. . . . I did the very best I could, and tried hard to keep the cup from going to our friends across the water."

In June of 1913, at the age of 20, Francis won his first Massachusetts Amateur Championship; in early September, Wright generously gave Francis a week's paid vacation so he could play in the Nationals. He did well, losing to the defending champion in the quarterfinals. Several men, including the president of the U.S. Golf Association, took note and invited him to play in the U.S. Open. At first Francis declined, but the president insisted. Back in Boston, George Wright encouraged his young employee, giving him more time off.

The 1913 U.S. Open took place at The Country Club; it is doubtful that anyone in the world knew the course better than Francis Ouimet. Persistent rain and raw winds bedeviled the players. The British competitors, who had long dominated the game, were accustomed to such conditions; so was Francis Ouimet. But the young amateur would be playing against the best professional golfers in the world. Merely being in the presence of the legendary Harry Vardon made the younger man's knees shake, but once on the fairway, Francis Ouimet was as focused as anyone who ever swung a golf club.

At the end of Day One, Francis stood in seventh place, four strokes behind the leader. On Day Two, having shot the lowest morning round, he was in a three-way tie for first place. Saturday, the three men began the play-off. After eight holes, the three were tied once again. At the 10th, Francis pulled ahead by one and stayed ahead. The crowd was in a frenzy by the time the golfers reached the 17th hole. There, less than 100 yards from his parents' modest home, Francis stretched his lead to three strokes. The crowd surged forward after his final putt at the 18th and carried Francis and his young caddie back to the clubhouse on their shoulders.

"Ouimet's stunning triumph captured the imagination of sports fans across the globe, sweeping away the notion that golf was a stuffy game for the old and rich."

In accepting the trophy, Francis was his usual unassuming self: Winning, he told the crowd, "is far beyond anything I ever dreamed to do. . . . I did the very best I could, and tried hard to keep the cup from going to our friends across the water." Graceful in defeat, Harry Vardon urged America "to be nothing but proud of her new champion. He has proved himself to be a superior golfer and a courageous fighter."

America was proud indeed. The victory of a hard working amateur inspired a new generation of golfers and changed the public's perception of the game forever. According to the World Golf Hall of Fame, "Ouimet's stunning triumph captured the imagination of sports fans across the globe, sweeping away the notion that golf was a stuffy game for the old and rich."

Francis Ouimet never turned pro. He won the Massachusetts Amateur title five more times and the national championship in 1914 and again in 1931. He represented the U.S. in international competition eight times. He married, had two daughters, and was a successful businessman. In 1949 he initiated the Francis Ouimet Caddie Scholarship Fund to provide college scholarships for caddies from underprivileged families. Francis Ouimet died on September 2, 1967; he was inducted into the World Golf Hall of Fame seven years later.

The Massachusetts Golf Museum in Norton is open on weekdays.

The Greatest Game Ever Played: Harry Vardon, Francis Ouimet, and the Birth of Modern Golf, by Mark Frost (Hyperion, 2002).