The rain hindered my return. Got to Brother's at Salem about 7:00 and lodged there. By this means I was not entangled with the riot committed that night in Boston by 200 people or more, breaking open Arthur Mason's warehouse in the Common, thinking to find corn there; wounded the Lieutenant Governor and Mr. Newton's son;…Were provoked by Captain Belchar's sending Indian corn to Curasso. The selectmen desired him not to send it; he told them, the hardest fend off! If they stopped his vessel, he would hinder the coming in of three times as much.

On this day in 1713, more than 200 people rioted on Boston Common over the high price of bread. The lieutenant governor tried to intervene but was shot and wounded for his efforts. This was the third such riot in four years. With grain in short supply, merchants were hoarding it to drive up prices. If they exported the grain to the West Indies, they could make even greater profits by selling to the sugar planters there. Boston selectmen tried without success to restrict grain sales to the domestic market. The riots helped persuade the colonial legislature to pass regulations designed to manage food shortages. Even with these laws on the books, however, hoarding and food riots continued throughout the eighteenth century.

In 1714 the town established a public granary where the poor could buy grain at below market prices. 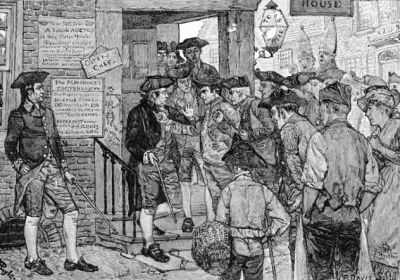 Bostonians like to think of themselves as cultured, law-abiding people, but in fact colonial Boston had a well-deserved reputation for street violence. Between 1700 and 1764, there were four riots in New York and six in Philadelphia. Boston had 28.

Compared to other cities, Boston's economy was stagnant in the eighteenth century. There was an ever-wider gulf between the "haves" and the "have-nots." A significant number of men were barred from voting because they owned no property. Mariners, unskilled craftsmen, apprentices, common laborers, slaves, indentured servants, free blacks, men under the age of 21— and, of course, women — were all excluded from the political process. When the hardships seemed unendurable, disenfranchised Bostonians essentially "voted with their feet": they rioted.

There were frequent protests against customs regulations, brothels, and the impressment of sailors; several "Pope Day" riots targeted Catholicism. A common cause of rioting was the chronic shortage of the grains produced and consumed by people in Massachusetts — corn and rye.

When the hardships seemed unendurable, disenfranchised Bostonians essentially "voted with their feet": they rioted.

In the early 1700s, Boston was a crowded town on a narrow peninsula lacking land on which crops could be raised. All food had to be imported, either from the countryside or from abroad. Queen Anne's War (1702–1713) sharply curtailed trade. Merchants, ever on the lookout for higher profits, began to hoard grain and export it "to Forraign Markets for Private Advantages." Twice Boston selectmen asked the colonial legislature to prohibit this, but it refused to do so.

By 1709 the city's poor faced a serious shortage of food. They were well aware of who among the town's elite was exploiting the situation. Andrew Belcher, one of the richest merchants in Boston, owned the second largest number of ships in town. He lived in a grand mansion in Cambridge, rode around in imported English carriages, and held many enslaved people. Two of the three grain riots were directed specifically at him.

Merchants, ever on the lookout for higher profits, began to hoard grain and export it "to Forraign Markets for Private Advantages."

In April 1710, one of Belcher's ships rested at anchor in the harbor, its hold filled with grain. A group of men rowed out and broke apart the rudder. "[T]he reason," wrote Judge Samuel Sewall in his diary, "was Capt. Belcher sending of her away laden with Wheat in this time when Wheat is so dear." The following day, some 50 men tried to force the vessel's captain to come ashore. They were arrested, but there was so much popular support for their actions that they were released without being charged. In October 1711, a devastating fire swept through town killing several people and leaving 110 families homeless. Faced with yet another calamity, Bostonians staged another riot.

Eighteen months later, Belcher was once again hoarding grain with the intent of exporting it to the West Indies, where the owners of sugar plantations — worked by African slaves — would pay almost anything for food products.

The Boston minister Cotton Mather counseled his parishioners: "Tis the Lord who has Taken away from you what He has Given to others." The working poor begged to differ. In May 1713, hundreds attacked the warehouse where Andrew Belcher stored his grain.

All ships docking in Boston were required to sell their grain to 15 identified bakers for a set price.

Boston selectmen returned to the legislature with a petition for an emergency law "with respect to the Scarcity of Provisions." This time they were successful. The new act prohibited merchants from exporting grain when it was in short supply. All ships docking in Boston were required to sell their grain to 15 identified bakers for a set price. Later Boston officials standardized the size and cost of a loaf of bread. In 1714 the town established a public granary where the poor could buy grain at below market prices.

Despite all these measures, "the poorest sort" broke into the public granary in 1741 and emptied it. And during the hard years of the American Revolution, Bostonians once again resorted to rioting as merchants returned to hoarding grain.

Down and Out in Early America, ed. by Billy G. Smith (Pennsylvania State University Press, 2004).