In the 1910 race for mayor of Boston, John "Honey Fitz" Fitzgerald stressed the class differences between him and his opponent, James Storrow, a member of the Brahmin elite.

My boyhood companions were barefooted and many of them sold newspapers in the streets. My opponent is so far out of touch with the common people, he can't appreciate what the common people want. . . . Do you want money power to control the city? Do you want the money-lenders to debauch the electorate and try to sneak into office by misleading the weak voter by the power of gold? But, no. no, no — a thousand times no. I know I can trust this intelligent audience to stand by the friend of the people — one of your own kind, to repudiate this grasping factor in the present election. Can't I boys?

One of our readers wanted to make the distinction that Curley was born in the South End, and is merely identified with South Boston as it is the neighborhood where he enjoyed tremendous popularity and political clout.
James Curley

The statement is a very acurate one. Inspite of the overwhelming strength of Boston's Irish vote, the first resident of South Boston to be elected Mayor was Ray Flynn.
Dates

I love these articles, but I'm a bit confused about the dates in this one. In the introductory paragraph, you say that Honey Fitz withdrew from the 1914 election campaign. Later, it seems to be 1912. Which is correct. Also, mayoral elections in Boston are currently held in odd-numbered years. What was the practice in those days? And you say that Honey Fitz lost in 1907 and was re-elected three years later. What was the term of office then? I know that state elections were held annually until 1920. What was the practice for city elections? Finally, when you do a story about someone who is no longer living, I really wish you would say when they died.
Dates

A correction should be noted with respect to the date of John F. Kennedy's election to Congress: he was first elected in 1946 and not 1948 as noted in the article.
Fitzgerald/Kennedys Vs The Lodges.

In 1916 Honey Fitz ran against H. C. Lodge and lost, score one for the Lodges. In 1952 JFK ran against HCL's namesake and grandson Henry Caboy Lodge II, who was the incumbent Senator. JFK went on to win in an Upset, score one for the Kennedys. In 1960 the Republican nominee for President, Richard Nixon, chose HCL II as his V. P. running mate. Jfk went on to win that election, score 2 for the Kennedys. In 1962 Ted Kennedy won the Democratic nomination for U. S. Senator. The Republican nominee was George Lodge, son of HCL II. Kennedy won that one, score 3 for the Kennedys. When JFK was President he appointed HCL II his ambassador to Vietnam.
Fitzgerald/Kennedys Vs The Lodges.

we sure like our noblesse oblige here in the Bay State!
Fitzgerald, Kennedys & District 4

On this day in 1895, a colorful Irishman from Boston's North End, nicknamed "Honey Fitz" for his charming and loquacious ways, was elected to the U.S. Congress. Ten years later, John Francis Fitzgerald returned to Boston and ran for mayor. His victory rattled the Yankee establishment. He worked on behalf of the poor, immigrants, and workers, but his administration was rife with graft, cronyism, and corruption. After withdrawing from the 1914 mayoral campaign, Fitzgerald turned his attention to business and family. His daughter Rose had married Joseph Kennedy, and "Honey Fitz" devoted himself to grooming their sons for political careers. Three of them would serve in the U.S. Senate. His namesake, John Fitzgerald Kennedy, would be the 35th President of the United States.

He dreamed of practicing medicine, a profession controlled by the city's Brahmin elite. He attended Harvard Medical School for a year but had to drop out when his father died. 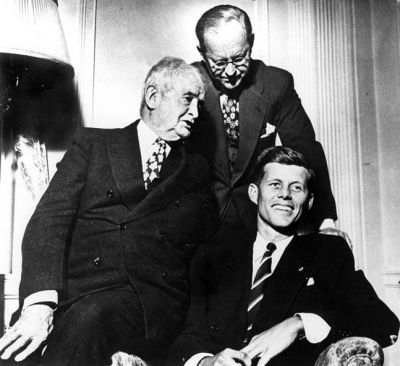 John Francis Fitzgerald, founder of an American political dynasty, was born in 1863 in the shadow of Boston's historic Old North Church. By then, the North End was no longer the fashionable enclave it had been in Paul Revere's day; it had become a ghetto for impoverished immigrants fleeing famine in Ireland. Fitzgerald's parents had settled there in the late 1840s. His father's grocery and liquor store supported the family of 13.

As a youth, the popular young John was called "Fitzie." He distinguished himself early on as a bright lad with an extraordinary work ethic, tremendous determination, confidence, and gregariousness. He was among the first Irish Catholic students to win a place at the prestigious Boston Latin School, where he excelled as a scholar, athlete, and student journalist. He dreamed of practicing medicine, a profession controlled by the city's Brahmin elite. He attended Harvard Medical School for a year but had to drop out when his father died. Even if he had become a doctor, it seems unlikely that Boston's Yankees would ever have embraced the feisty Irishman. Fitzgerald would seek his future among his own kind.

"Honey Fitz can talk you blind on any subject you can find."

His first venture was selling insurance, and his sociable nature helped make him a success. He was a handsome man with an immaculate, dapper style of dress and extraordinary gifts as a public speaker. An avid reader with a fine memory, he could dazzle audiences with his informed opinions, presented in a blaze of eloquent oratory and a touch of what one reporter called "his consummate Irish charm." One newspaper printed a poem that began, "Honey Fitz can talk you blind on any subject you can find."

In 1892 Fitzgerald won election as a city councilman and began to establish himself as a political power in the North End. He set up the "Jefferson Club" in a shabby office and encouraged anyone with a problem to stop by for help. With prodigious energy, he placed constituents in jobs, delivered holiday food baskets to the needy, sent gifts to every newly married couple in the neighborhood, and never missed a North End wake. When he was campaigning, he made as many as ten speeches in a night, denouncing his opponents as anti-Catholic, anti-Irish, and anti-immigrant.

an irate Senator Henry Cabot Lodge asked him, "Impudent young man. . . Do you think Jews or Italians have any right in the country?" Fitzgerald replied, "As much as your father or mine. It's only a difference of a few ships."

By 1893 Fitzgerald had been elected to the state senate. He increased his support among Italian immigrants by sponsoring a bill to make Columbus Day a state holiday. With this expanded power base, he shocked Yankee Boston three years later by winning a seat in the U.S. House. During his three terms in Congress, he opposed anti-liquor laws as "paternalistic" (although he himself was a non-drinker) and fought for immigrants and working people. When he objected to a bill that would have required new immigrants to be able to read the Constitution, an irate Senator Henry Cabot Lodge asked him, "Impudent young man. . . Do you think Jews or Italians have any right in the country?" Fitzgerald replied, "As much as your father or mine. It's only a difference of a few ships."

In 1905 Fitzgerald left Congress to mount a successful campaign for Mayor of Boston. He toured the wards in a large red car, an extraordinary sight at the time, proclaiming his slogan "Bigger, Better, Busier Boston!" With the help of powerful ward bosses, Fitzgerald became Boston's third Irish mayor.

He created such unlikely new jobs as "rubber boot repairers," "tea warmers," and "watchmen to watch the watchmen" and gave them to his supporters, cronies, and relatives.

Mayor Fitzgerald built a citywide political machine. He continued his work on behalf of the city's neediest residents; he also continued to tolerate, even promote, a political culture of graft and corruption. He created such unlikely new jobs as "rubber boot repairers," "tea warmers," and "watchmen to watch the watchmen" and gave them to his supporters, cronies, and relatives. In 1907 a candidate backed by a good government coalition defeated Fitzgerald, but three years later he won re-election.

In 1912 he found himself facing a wily Irishman from South Boston, James M. Curley. As soon as Curley announced that he would present a series of "educational" lectures with titles such as "Graft in Ancient and Modern Times" and "Great Lovers from Cleopatra to Tootles" (referring, as every Bostonian knew, to the blond cigarette girl Tootles Ryan, who was rumored to be Fitzgerald's mistress), "Honey Fitz" ended his campaign. He never won an election again.

In his later years, Fitzgerald focused on his business interests and on honing the political instincts of his daughter Rose's promising sons. In 1948, when John Fitzgerald Kennedy decided to run for Congress, 85-year-old "Honey Fitz" helped him plan his campaign strategy. At the victory celebration, Fitzgerald danced an Irish jig, sang "Sweet Adeline," and predicted that his grandson would someday occupy the White House. Shortly after his election, John F. Kennedy renamed the presidential yacht the Honey Fitz in honor of his maternal grandfather.

During the summer, National Park Service rangers lead a tour of Boston's North End that focuses on the Fitzgerald and Kennedy families.

Letters and Speeches of the Honorable John F. Fitzgerald Biographical Directory of the United States Senate

The Fitzgeralds and the Kennedys, by Doris Kearns Goodwin (Simon and Schuster, 1987).