The road [into the Killery mountains] was rough, and we constantly were meeting pale, meager-looking men, who were on their way from the mountains to break stones, and pile them mountain-high, for the paltry compensation of a pound of meal a-day; these men had put all their seed into the ground, and if they gave up their cabins, they must leave the crop for the landlord to reap, while they must be in a poor-house or in the open air ….

We met flocks of wretched children going to school for the "bit of bread," some crying with hunger, some begging to get in without the penny which was required for their tuition. The poor emaciate creatures went weeping away, one saying he had been "look for a penny all day yesterday, and could not get it."

. . . [T]hough we met multitudes in the last stages of suffering, yet not one through that day asked charity, and in one case the common hospitality showed itself, by offering us milk when we asked for water. This day I saw enough, and my heart was sick – sick.

From Lights and Shades of Ireland, by Asenath Nicholson (1850)

The following are 2 newspaper articles from the pro-labor newspaper "The Voice of Industry," Lowell, MA. Plea from Skibbereen To the Girls of Lowell "The Voice of Industry," Lowell, MA April 9, 1847 The thought has occurred to me to-day while visiting the miserable hovels of the poor creatures dying with destitution, that the girls of Lowell, of whom the world has heard much honorable mention, might do a grateful thing in rescuing some of their sex not only from the misery but the shame of their situ- ation. No language of mine can describe the destitution of clothing to which all ages and both sexes are reduced in this land of the shadows of death. Everything of value has been pawned for food. Thousands of wo- men and children here are so destitute of cov- ering as to prevent them from going out into the streets to beg. In hundreds of these hov- els the living wife or child or husband has lain for days close beside the dead body of a husband, mother or wife, in order to cov- er themselves with the rags spread over the deceased. Now I had thought to-day, while witnessing these scenes of suffering, that the Girls of Lowell might give each a comforta- ble calico dress, to clothe the destitute of their sex in Skibbereen. I am sure such an exam- ple would be followed by the ladies in differ- ent towns in New England, and that tens of thousands of these poor, thin, naked, blue- lipped children would attest in favor of their benefactresses at another day; 'I was naked and ye clothed me.' I hope the counties of Middlesex and Essex will club together and send out a ship freighted with provisions and clothing for Ireland, and that it will embrace in its bill of lading 10,000 calico dresses, suited to every size, from the Factory Girls of the two counties. E.B. Skibbereen, Feb. 23, 1847 __________________________________ The Factory Girls - Heaven Bless Them! "The Voice of Industry," Lowell, MA April 30, 1847 The following brief communication will show how cordially and effectively the factory girls of Lowell have responded to the appeals made to their feelings of sympathy and benevolence, by the distresses of the suf- foring poor in a foreign land. We wish that we were at liberty to make public the names of those who have been the chief instruments in this labor of love, but true charity seeks not the applause of the world, and the injunc- tion of silence is put upon our lips. Merrimack Corporation, Lowell April, 14. A few evenings since we received a call from two blessed 'sisters of charity,' who were responding in the appeal of the Christian Citizen, by visiting every Factory boarding-house in Lowell, and pre- senting the claims of the suffering Irish. The enclosed list proves that their efforts were not in vain, though the result would have been far more surprising and delightful, had the response been as fervent as the appeal through the lips of these most excellent fe- males. One small boarding-house, upon this corporation, was the focus and fountain of all the interest; and when I went in to add my mite of labor to theirs, and saw the five large boxes so nicely packed, I was astonished to see how much a few weak hands could ac- complish. Lowell "Mill Girls" sent a total of 1,032 Dresses, Shawls, Cloaks, other clothes, and Quilts.
Irish Famine

It is unfortunate that the writer chose the word 'Even' when adding in the native and slave contributions.

Thank you for pointing that out.  We have adjusted that paragraph.

On this day in 1847, Boston's leading citizens held a meeting at Fanueil Hall in response to news of the famine devastating Ireland. With the failure of the potato crop several years in a row, tens of thousands of Irish peasants were suffering from malnutrition, disease, and exposure. Between 1847 and 1851, 1,000,000 Irish men, women, and children died. As people in Boston realized the enormity of the disaster, donations poured in. The city's Catholic community sent $150,000 to the famine-stricken country. A relief committee collected 800 tons of food and clothing and persuaded the U.S. government to allow a fully-loaded warship to sail on a mercy mission from Boston to Ireland.

Early in the winter of 1845, people in the United States began to hear dreadful tales of hunger in Ireland. A fungus had infected the Irish potato crop, destroying nearly a third of it. Ireland was soon facing a famine.

Although farms in Ireland also produced grains, meat, and butter, everything but the potato was exported. Exports yielded the cash needed to pay rent and taxes owed to English landlords. The potato was the mainstay of the Irish diet and the key to the peasantry's survival. When the potato blight struck, people began to starve.

In the U.S., Irish Catholic immigrant communities were the first to respond to the crisis. As early as December 1845, Father Thomas O'Flaherty, a parish priest in Salem, set up an Irish Charitable Relief Fund. By the following summer, American Catholics were sending considerable sums of money to Ireland. In December 1846, the Quakers launched a well-organized relief operation. But most Americans expected the potato blight to be a short-term problem; the new crop would surely restore Ireland and the Irish to health.

On January 25, 1847, a steamship from Ireland reached the U.S. for the first time since the previous fall. It brought news of the extent of the catastrophe. The blight had returned, ruining yet another year's potato crop. Men, women, and children were dying of hunger by the tens of thousands. The winter weather was the most severe in memory. People were surviving the hunger only to die of exposure. Death was so common and people so weak that corpses were left unburied. Survivors lacked the strength to work. Witnesses to the disaster were shocked by the enormity of human suffering.

The blight had returned, ruining yet another year's potato crop. 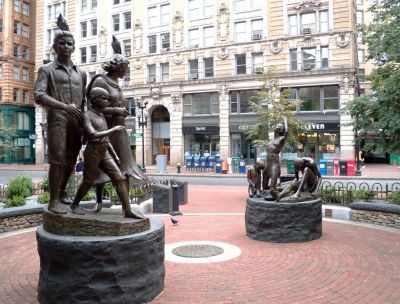 As the severity of the situation became clear, Americans responded quickly and generously. In February 1847, Vice President George Dallas called a public meeting in Washington, DC. He urged every city, town, and village in the nation to raise money for the suffering people of Ireland.

Teas, concerts, balls, and bazaars were held throughout the country. Protestant churches, Catholic dioceses, and Jewish synagogues all collected funds to send to the Central Relief Committee in Dublin. Even the Choctaw Indians and slaves on an Alabama plantation contributed to the effort.

With its large Irish population, Boston was at the forefront of the campaign. On February 7, 1847, the city's newly appointed Bishop devoted his first pastoral letter to the plight of the Irish: "A voice comes to us from across the ocean, the loud cry of her anguish has gone through the world. . . ." He urged his parishioners to give unstintingly. "Apathy and indifference, on an occasion like this," he said, "are inseparable from crime!"

That very night, the Bishop and his flock created a relief committee. Within a few weeks' time, $20,000 was on its way to Ireland from the Diocese of Boston.

"A voice comes to us from across the ocean, the loud cry of her anguish has gone through the world. . . ."

Non-Catholic Bostonians also responded. On February 18th, they held a large public meeting at Faneuil Hall "to consider what Boston should do for Ireland." The result was the Boston Relief Committee, headed by Mayor Josiah Quincy Jr. and a large number of prominent civic and business leaders.

The BRC set to work immediately, petitioning Congress for permission to transport provisions to Ireland in a naval vessel. Although the country was at war with Mexico and ships were in short supply, Congress agreed to turn the U.S.S. Jamestown, a ship berthed at the Charlestown Navy Yard, over to the Boston Relief Committee.

Robert Bennet Forbes, the son of a wealthy Boston merchant, enlisted a volunteer crew. Supplies poured in, and on St. Patrick's Day, the all-Irish Boston Laborers' Aid Society began loading the vessel. On March 27th, the Jamestown sailed out of Boston Harbor with a heavy cargo of life-saving supplies.

The ship made the crossing in just over two weeks. It arrived at the docks in Cork to a cheering throng and a band playing "Yankee Doodle." That night celebratory receptions and bonfires were held for the crew of the Jamestown.

On a single day in April, over 1,000 Irish immigrants arrived at the port of Boston.

By the summer of 1847, Americans had sent over $500,000 and many thousands of tons of supplies to Ireland. Hopes for a good harvest did not materialize. The suffering continued. Anyone who could leave Ireland did. In 1847, the worst year of the famine, the Irish-born population of Boston swelled by more than 13,000. On a single day in April, over 1,000 Irish immigrants arrived at the port of Boston.

Between 1845 and 1855, fully one-third of the population of Ireland left their homeland. Over 4,000 were quarantined on Deer Island in Boston Harbor due to illness before being allowed on the mainland. Some 850 never made it to Boston and were buried in Resthaven Cemetery on the island. However, many thousands more made it to their final destination. By 1855, there were more than 50,000 Irish in Boston. Over the next decades, they would transform the city's political, social, and cultural life.

In 1998, on the 150th anniversary of the Great Hunger, a $1,000,000 work of public art, the Boston Irish Famine Memorial, was unveiled at the corner of Washington and School Streets. The sculpture stands just a few blocks from the docks where immigrants who were lucky enough to survive the rigors of the voyage arrived.

There is a self-guided three-mile walking tour of sites important in the history of the Boston Irish and includes the Irish Famine Memorial.

Details of the Irish Famine Memorials in Boston, created in 1998.