The first time I ever saw Mr. Webster was on the 17th of June, 1825, at the laying of the corner-stone of the Bunker Hill Monument. I shall never forget his appearance as he strode across the open area, encircled by some fifty thousand persons men and women waiting for the "Orator of the Day," nor the shout that simultaneously burst forth, as he was recognized, carrying up to the skies the name of "Webster!" "Webster!" "Webster!"

It was one of those lovely days in June, when the sun is bright, the air clear, and the breath of nature so sweet and pure as to fill every bosom with a grateful joy in the mere consciousness of existence. There were present long files of soldiers in their holiday attire; there were many associations, with their mottoed banners; there were lodges and grand lodges, in white aprons and blue scarfs; there were miles of citizens from the towns and the country round about; there were two hundred gray-haired men, remnants of the days of the Revolution.

Mr. Webster was in the very zenith of his fame and of his powers.

When he came to address the few scarred and time-worn veterans some forty in number who had shared in the bloody scene which all had now gathered to commemorate, he paused a moment, and, as he uttered the words "Venerable men," his voice trembled, and I could see a cloud pass over the sea of faces that turned upon the speaker.

He said: "Our poor work may perish, but thine shall endure: this monument may moulder away, the solid ground it rests upon may sink down to the level of the sea; but thy memory shall not fail. Wherever among men a heart shall be found that beats to the transports of patriotism and liberty, its aspirations shall claim kindred with thy spirit!"

I have never seen such an effect, from a single passage. Lifted as by inspiration, every breast seemed now to expand, every gaze to turn above, every face to beam with a holy yet exulting enthusiasm. It was the omnipotence of eloquence, which, like the agitated sea, carries a host upon its waves, sinking and swelling with its irresistible undulations.

Does anyone know for sure how the battle got misnamed? I've heard different stories about why it was called The Battle of Bunker Hill.
Bunker or Breed's Hill

According to the series on "The Revolution" on the History Channel, the fortifications were originally going to be on Bunker Hill, but near the last moment it was decided to fortify Breed's Hill, which was nearer to the water. But the battle continued to be known at the Battle of Bunker Hill nevertheless. I've never been quite clear, but I assume that the "Bunker Hill Monument" is on Breed's Hill.
Bunker or Breed's Hill

Per wikipedia the monument is actually located on Breed's Hill.
Location and related facts.

Per Wikipedia the 221' granite obelisk we know as Bunker Hill Mounment is actually located on Breed's Hill. The granite blocks utillized in its condtruction were quarried in Quincy, MA and shiped via the first commercial railroad built in the U. S. The blocks were later transfered to barges and then delivered to the site. The railroad was built specificly for this purpose.
Bunker Hill Day, the legal holiday.

Would you agree that we are all different. If that is so, then why do we, as a society, spend so much time trying to crush, to demolish, to suffocate that difference? The homogonization of society, whether it is by eliminating unique holidays that do celebrate freedom, such as Bunker Hill Day, Patriot's Day and VJ-day (Victory Over Japan as celebrated in Rhode Island), or by building McMansions or standardized lessons for all children everywhere, takes away creativity and ingenuity, takes away that which brings flavor and unique sites into our world and ultimately removes that which is the landmark of being human beings. Your freedom to be different should never be compromised by the force of small minded people looking to make everything the same. It's ok to expect to be different. ------------------------- Much in life does not mean doing it right or wrong, just different!
Bunker Hill Day, the legal holiday.

The moment suggest its only a legal holiday in Boston. acyually its a legal holiday for all of Suffolk County, which includes Boston, Revere, Chelsea, and Winthrop. Currently, with local emotions running high, debate on Beacon Hill is in full swing with an aim to end this legal status --- this may well become the "Second BAttle of Bunker/Breeds Hill!"
Login

On this day in 1825, at the laying of the cornerstone of the Bunker Hill Monument, Daniel Webster addressed a crowd of 100,000, including 190 veterans who had survived the first major battle of the Revolution — an encounter between colonial militiamen and a larger number of better-trained and equipped British Regulars. Eventually the Redcoats prevailed, but half their men were killed or wounded in the process. The militiamen suffered high casualties, too, but they — and people throughout the colonies — took heart from the strong defense they mounted. Fifty years later, "on the ground distinguished by their valor ... and the shedding of their blood," Webster called on Americans to make a thriving democracy and a strong union a living memorial to the men who had died there.

By 1874, when it was annexed to Boston, Charlestown's population, and its politics, were dominated by working-class Irish families. 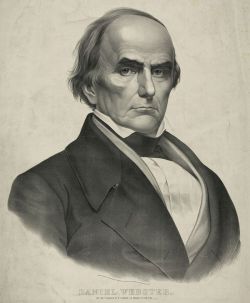 The Battle of Bunker Hill — a misnomer, since the battle actually occurred on nearby Breed's Hill — was the opening salvo in the American Revolution. After the militiamen forced the Redcoats back to Boston on April 19th, they held the enemy under siege in the city.

The colonial soldiers spent the time fortifying the heights in Dorchester and Charlestown in preparation for a bombardment. But the Americans did not yet have the firepower they needed, and the British Army decided to strike. The Redcoats had the advantage in training, numbers, and weaponry; the colonials had determination,even desperation, on their side.

The Regulars made three frontal assaults on Breed's Hill. The first two were repulsed, causing heavy casualties on both sides. Finally, on the third assault, the exhausted colonials, reduced to half their original strength, ran out of ammunition and had no choice but to defend themselves with gun butts and rocks. After two-and-a-half hours, the Redcoats finally breached the parapets, forcing the Americans to retreat.

Schoolchildren sent pennies, and men and women around New England paid $5.00 to become members of the Association. 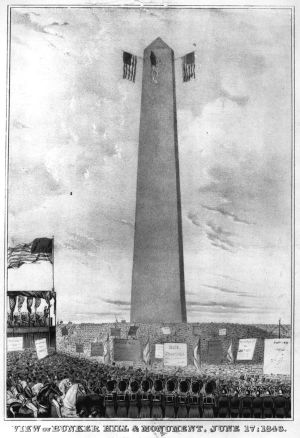 The cornerstone was laid on the 50th anniversary of the battle. Daniel Webster, arguably the greatest orator in U.S. history and a founding member of the BHMA, was the master of ceremonies. The dedication was a grand celebration, but things did not go so smoothly over the next months and years.

The British Army had scored a victory, but it had come at a high cost.The Americans may have lost the hill, but the militiamen's courage had a powerful effect on colonial morale. They had shown that they could fight and fight well against the greatest military power on earth.

In 1822 a group of prominent citizens formed the Bunker Hill Monument Association (BHMA) to preserve the memory of the battle and to celebrate Massachusetts' contribution to the Revolution. A simple wooden memorial had been erected in 1797; now planning and fundraising began to replace it with a more substantial monument.

In January 1825, Governor William Eustis proposed that the state should officially sponsor the monument, but the legislature did not go along. The Monument Association would have to raise the money itself. Schoolchildren sent pennies, and men and women around New England paid $5.00 to become members of the Association. In the 1840s, the workingmen of the Mechanics Charitable Association donated $800 and some real estate, but it was female fundraising that ensured the completion of the monument. Through the 1830s and 1840s, the Ladies' Fair at Boston's Quincy Market sold food, handicrafts, books, and other goods produced and collected by women all over Massachusetts. The $30,000 raised was donated to the monument.

Over the next few years, the BMHA held annual celebrations that typically began at 6:00 am with the ringing of church bells.

Eighteen years after the groundbreaking, the 221-foot granite obelisk was finally dedicated on June 17, 1843, the largest Bunker Hill Day celebration since 1825. A stately procession, led by President John Tyler, members of the cabinet, and an assortment of dignitaries, took three hours to march from the State House to Bunker Hill. The speaker was Daniel Webster, then at the peak of his oratorical powers.

Over the next few years, the BMHA held annual celebrations that typically began at 6:00 am with the ringing of church bells. Classical music concerts, parades, and long patriotic speeches were followed by private dinners, evening concerts, and yacht races.

The centennial of the battle in 1875 was the occasion for the biggest Bunker Hill Day celebration since 1843. It was also the last one the BHMA controlled. Although the first Irish Catholics to settle in the area met with hostility from the Protestant residents, after the Civil War, Charlestown became a solidly Irish community. By 1874, when it was annexed to Boston, Charlestown's population, and its politics, were dominated by working-class Irish families.

. . . "for the Irish-Americans, Bunker Hill Day was a celebration of the neighborhood called Charlestown, its people and their heritage, as well as the glory of their adopted nation."

The change in Charlestown's population led to a change in the celebration and in the meaning of Bunker Hill Day. In 1885 what was then called the "Morning Carnival" included skits on the signing of the Declaration of Independence, a "spoof on high society life," and a burlesque show performance by policemen in drag. Fireworks, beginning the night before the carnival, became a major attraction. So did drinking. "Open houses" were added to the mix, with Charlestown residents throwing open their doors to all who cared to join in the celebration. Bunker Hill Day came to look more and more like a holiday in rural Ireland. As a local paper put it in 1894, "strongly commingled patriotism and punch" marked the day.

A recent study of Irish immigrants and Bunker Hill Day concluded that "for the Irish-Americans, Bunker Hill Day was a celebration of the neighborhood called Charlestown, its people and their heritage, as well as the glory of their adopted nation." For many years, the City of Boston observed Bunker Hill Day as a legal holiday.

The Bunker Hill Monument is part of Boston National Historical Park and a stop on the Freedom Trail.

Massachusetts Historical Society has an on-line exhibit on Bunker Hill. The History of the Bunker Hill Monument Association during the First Century of the United States of America

"The 'Celebration Begins at Midnight': Irish Immigrants and the Celebration of Bunker Hill Day," by Michael Musuraca in Labor's Heritage 2 (1990).

"Commemoration, Public Art, and the Changing Meaning of the Bunker Hill Monument," by Sarah J. Purcell in The Public Historian, Vol. 25. (Spring 2003).