A WHEEL AROUND THE HUB

The meet [on September 11-12,1879] was entirely informal. Personal invitations had brought together individual members of seven or eight bicycle clubs and also several amateurs from the unofficered ranks of the "unattached." A rosy September morning smiled on them as they glided by ones or twos toward the place of meeting. This was the foot of a broad, winding avenue in ancient Roxbury, now a part of the municipality of Boston. Roxbury had seen many bicycles, but never so many at once.

There was something novel in the diversity of dress, in the equipments with knapsacks and . . . bags, portending a journey. The uniforms of the Boston Bicycle Club and the Massachusetts Bicycle Club were familiar, but the gray costumes of the Worcester Bicycle Club, the white flannel shirts of the Hartfords, and the blue polo caps, marked "E. Bi. C.," and the strange attire of the Newark, Washington and Salem men were remarked, by the early-morning business men, on their way to town.

Carriage people reigned up to look, and teamsters to have a pleasant word: the street circulation of Roxbury had a stoppage. The community went into committee of the whole to consider a novel state of facts and canvass the prospects: ladies smiled from the windows and piazzas, children thronged the walls, and the irrepressible small boy shied his cap at the gleaming spokes and cried, "Mister, your wheel's loose!"

Bicycles are recognized -- in law also --

as being a legitimate means of transportation for adults. To characterize them as "an essential part of childhood" is to denigrate them -- and those who use them -- to second-class status. I suggest those who so denigrate bicycles try to get around in an urban setting -- such as downtown Boston -- in a motor vehicle during rush hour. And then compare with that doing so on a bicycle. And also to ask him/herself: How much pollution is generated by the bicycle? What is the cost of a complete set of tires? How much does vehicle insurance cost? How much is licensing? What is the fee for parking? Where would the corporations be without couriers -- particularly those who ride bicycles? Luckilly, the efforts of responsible adults have begun changing the mischaracterization of the bicylce as mere "toy" by getting established, as central example, police bicycle patrols, which, when it comes to suppressing crime, can go places motor vehicles cannot. And which don't pollute. And which enhance the health of police officers. Need I repeat the benefits to the environment, and to the health and wallet, of the bicyclist? ------------------------- A lie is halfway around the world before the truth can get its shows on. -- Mark Twain
Bicycles are recognized -- in law also --

I do not understand how a 100-mile race could be ridden from Worcester to Boston, unless it was a round trip.
Typos and Additional Info

he was a brilliant salesmen (salesman) When the League's held its...meeting (League) M.I.T (missing last period) MA. (shouldnýt have period ý maybe fell off M.I.T above) the roads improvements (road) And a non-grammar related note: Waltham could be cited in this article as the home of Bicycle Park, the first track in Massachusetts built exclusively for bicycles. Bicycle Park was extremely popular at the end of the 19th century and several world records were set there. Also, Charles Metz, the founder of the Waltham Manufacturing Company, had 22 cycling related patents. (http://hubtrotter.blogspot.com/2009/06/when-waltham-was-hub-of-cycling.html)
Login

On this day in 1882, seven men took over 12 hours to cover the distance from Worcester to Boston in the nation's first 100-mile bicycle race. Boston was becoming the bicycle capital of America. Pedestrians strolling in Copley Square had to be wary of young men speeding by on "high wheelers." The city was home to the nation's first bicycle club, first race, first indoor riding rinks, and first mass-produced bicycle — Albert Pope's "Columbia." By 1882 Pope's company was the world's largest bicycle maker. Within a few years, the bike went from being a rich man's plaything to a relatively affordable means of transportation. Although, the car would soon replace it on the road, the bicycle became an essential part of American childhood, and experienced a resurgence in popularity as an eco-friendly mode of transportation. 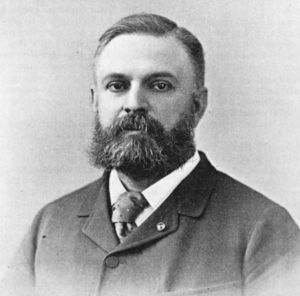 Although some historians believe there are bicycles depicted in Egyptian tomb drawings or Pompeii frescoes, the ancestor of today's bicycle was most likely a "walking machine" created by a French aristocrat in the 1790s. Intended primarily as a courtly amusement, the "hobby horse" created by Count Mede de Sivrac was propelled by the feet, in a sort of gliding walk. Within two decades, a German nobleman realized that if he made the front wheel steerable, he could use the contraption to travel around his vast estate. When he took several of his "Draisiennes" to Paris in 1818, he started a craze.

It was only in the 1860s that the addition of pedals, rubber wheels, and lightweight metal in place of wood made the "walking machines" maneuverable enough to be used as human-powered transportation, a type of "mechanical horse." The early models were called velocipedes (literally "fast foot"). The high-wheel variety was popular because it maximized the distance the bike could travel with each turn of the pedal. It gave a rough ride, particularly over cobblestone or rutted roads, but it moved at a thrilling speed.

The first time American entrepreneur Albert Pope laid eyes on the newly named "bicycle" was at the Centennial Exhibition in Philadelphia in 1876. He immediately saw that bicycling could be more than an enjoyable pastime. It could be a new form of transportation that would appeal to a mass market. Pope decided he would be the first to produce bicycles in the U.S. 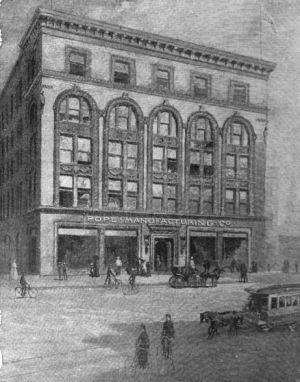 Pope returned home to Boston, imported bicycles for study and sale, and hired a local mechanic to build a prototype. After shrewdly buying up outstanding patents, he contracted with a struggling sewing machine company to start producing bicycles. The result was the Columbia, America's first commercially-produced, self-propelled vehicle. The Columbia would make Albert Pope a household name. In 1878 he sold 50; only two years later, he sold 12,000 and had back orders for another 2,500.

But Pope was not just a manufacturer; he was a brilliant salesmen, and he promoted cycling with all the zeal of a newly converted evangelist. In 1878 the brand new Boston Bicycle Club sponsored the nation's first bicycle race. The next year, Pope was a moving force and a competitor in the highly publicized "Wheel Around the Hub," a two-day event that took 40 socially prominent men on a 100-mile ride around Boston and the South Shore.

Pope also launched a weekly newspaper and two cycling magazines. In 1880 he helped establish the League of American Wheelmen to act as a central racing authority. When the League's held its second annual meeting in Boston in 1881, thousands of spectators cheered as 800 members cycled down Commonwealth Avenue. A year later, Pope's "Expert Columbia" model became the first bicycle ridden across the U.S; the 3,700-mile, 103-day trip concluded in Boston.

Declaring American roads "the worst in the civilized world," he financed courses at M.I.T. for road engineers and lobbied the state to set up a highway commission. 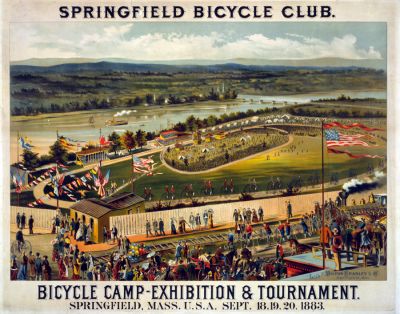 With Pope's success came rivals. Springfield, well known for its skilled mechanics and expertise with metallurgy, became a center for the testing, production, and racing of bicycles. In 1882 the Bicycle Club of Springfield hosted the first of what would become an annual meet. The event was soon drawing more than 20,000 spectators and an international field of racers to the Hampden Park racetrack.

Most of the young men who could afford the $300 that the first bicycles cost — more than three months' pay for the average laborer — were from the elite Ivy League and Brahmin set. Many of these riders ended their outings at the Massachusetts Bicycle Club's elegantly furnished clubhouse on Newbury Street. Other cycling clubs followed suit, opening lavish clubhouses, introducing club uniforms, holding social events, and developing mottos and chants.

Cycling was not without its detractors, who viewed the new machine as a menace and wanted it banned from parks and public roads. Realizing that the new sport needed advocates as well as promoters, Pope organized the Wheelman Club to fight for cyclists' rights. Declaring American roads "the worst in the civilized world," he financed courses at M.I.T. for road engineers and lobbied the state to set up a highway commission. He even paid to have a stretch of Columbus Avenue paved in his campaign for better road surfaces.

In 1896 Susan B. Anthony declared that "the bicycle has done more for the emancipation of women than anything else in the world."

The bicycle was a potent agent of social change, never more so than when ridden by women. Critics claimed that cycling threatened female modesty, encouraged improper, unchaperoned liaisons with men, and even endangered women's ability to bear children. Many women defied the critics and enthusiastically embraced everything about cycling — from the clothing worn to the exercise it afforded. The biggest benefit was the independence and mobility that cycling made possible. In 1896 Susan B. Anthony declared that "the bicycle has done more for the emancipation of women than anything else in the world."

One remarkably talented man used competitive cycling to help break the color barrier in sports. Major Taylor, an African-American who moved from his native Indiana to Massachusetts to compete in what he hoped would be a more racially tolerant climate, found that even here he had to overcome what the Globe called "systemic bigotry, gang tactics, and even death threats from other racers." Although as he wrote in his autobiography, Taylor "was not always given a square deal or anything like it," in 1899 he became the second black athlete in any sport to win a world title. Taylor retired from competitive cycling in 1910; when he died in 1932, his fame and fortune gone, he was buried in an unmarked pauper's grave. Largely unknown today, Taylor was once the country's most famous athlete, hailed throughout the world. In 2006 his adopted hometown of Worcester renamed a major downtown roadway "Major Taylor Blvd." in honor of the man cycling fans called the "Worcester Whirlwind."

By the time Albert Pope died in 1909, his company, now located in Westfield, MA., was producing cycles that ordinary people could afford and that made life easier for letter carriers, policemen, firemen, messengers, country doctors, and soldiers. As the new century approached, so did the end of cycling's golden age. The mechanical advances achieved by bicycle manufacturers and the roads improvements that cyclists had demanded paved the way, literally, for a machine that would soon eclipse the two-wheeler. The Springfield men who introduced the nation's first gasoline-powered automobile had learned their trade making bicycles.

A statue of Major Taylor is located infront of the Worcester Public Library.

Smithsonian Magazine: The Unknown Story of ‘The Black Cyclone,’ the Cycling Champion Who Broke the Color Barrier NPR: Major Taylor, the “Worcester Whirlwind”

On this day in 1844, after a decade of hardship and perseverance, Charles Goodyear received a patent for vulcanized rubber. The first boots and clothing made from rubber had performed poorly in the American environment....

On this day in 1899, Newton inventor F.O. Stanley took his wife Flora for a drive — into the record books. Leaving home in a steam-powered Locomobile, built in the Stanley brothers' Watertown shop, the...