On Tuesday last the body of the people of this and  all the adjacent towns, and others from the distance of twenty miles, assembled at the old south meeting-house, to inquire the reason of the delay in sending the ship Dartmouth, with the East-India Tea back to London, and having found that the owner had not taken the necessary steps for that purpose, they enjoin'd him at his peril to demand of the collector of the customs a clearance for the ship, and appointed a comm [it ]tee of ten to see it performed ; after which they adjourn'd to the Thursday following ten o'clock. …The people finding all their efforts to preserve the property of the East India company and return it safely to London, frustrated by the tea consignees, the collector of the customs and the governor of the province, DISSOLVED their meeting. -- But, BEHOLD what followed ! A number of brave & resolute men, determined to do all in their power to save their country from the ruin which their enemies had plotted, in less than four hours, emptied every chest of tea on board the three ships commanded by the captains Hall, Bruce, and Coffin, amounting to 342 chests, into the sea ! ! without the least damaged done to the ships or any other property.

On this day in 1738, David Kinnison was born in Old Kingston, Maine, or so he claimed. An early convert to the cause of American independence, he claimed to have participated in the dumping of tea into Boston Harbor, an escalation of resistance to British rule that would come to be known as the Boston Tea Party. Although Kinnison's claims to participation in the "Tea Party" and other activities of the Revolutionary War have since been debunked, his story reflects the cloak of secrecy that shrouded the actual participants in the historic event. Most "Tea Party Raiders" took their story to their graves, but as the fifty-year anniversary of the destruction of the tea approached, men like Kinnison emerged with stories that connected them to an action that was no longer considered an act of defiance but one of bravery.

The Tea Act would have caused John Hancock, one of the wealthiest men in the colonies, considerable financial losses. 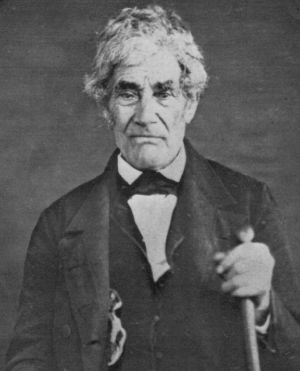 In the 1760s, the British treasury was depleted by the cost of fighting to defend the crown's North American colonies. Determined that the colonists should shoulder more of the burden, in 1767 Parliament passed the Townshend Acts, which imposed taxes on all glass, lead, paint, paper, and tea purchased in the colonies. Colonial opposition to being taxed without consent led to a successful boycott of the affected goods. In response to a fall in profits, importers pressured Parliament to eliminate the taxes. In 1770 all of the Townshend Acts were rescinded, with one exception: the tax on tea remained in place.

After several other unsuccessful attempts to impose taxes on the colonists, in the spring of 1773 Parliament reaffirmed the tax on tea. The Tea Act protected the powerful East India Company from bankruptcy and granted the company a monopoly on the colonial tea trade in the colonies, as well as a much needed loan on generous terms. The act outraged colonial merchants not only because it revived the issue of Parliament's right to taxation without representation but also because it curtailed the profitable trade in imported tea. The act would cause John Hancock, one of the wealthiest men in the colonies, considerable financial losses. With the encouragement of Boston merchants, the Sons of Liberty called for the people of Massachusetts to boycott East India Tea.

The Tea Act protected the powerful East India Company from bankruptcy and granted the company a monopoly on the colonial tea trade in the colonies, as well as a much needed loan on generous terms.

But activists supported more dramatic action. On November 28, 1773, three East India Company ships, the Dartmouth, the Eleanor, and the Beaver, arrived in Boston Harbor carrying a cargo of tea as well as other goods. Fearing that the tea would be seized for failure to pay customs duties, and eventually be sold to customers who did not support the boycott, the Sons of Liberty organized a committee to watch the ships to see that they were not unloaded. Tensions mounted as patriot groups tried to persuade the East India Company and the governor to return the tea to England.

On December 17th, British authorities planned to seize the tea for non-payment of taxes. The night before, in the largest such gathering yet held, a crowd of more than 5,000 men and women packed the Old South Meeting House to discuss how to prevent the tea from being unloaded. "Fellow countrymen," exhorted the fiery Samuel Adams, "we cannot afford to give a single inch! If we retreat now, everything we have done becomes useless!"

"Fellow countrymen," exhorted the fiery Samuel Adams, "we cannot afford to give a single inch! If we retreat now, everything we have done becomes useless!"

At a pre-arranged signal, the meeting broke up; approximately 1,000 people moved down to the wharf where the ships were berthed. The group included about 150 men, some disguised as "Indians" with blankets wrapped around their shoulders, feathers in their hair, and charcoal darkening their faces. The raiders methodically dumped 45 tons of tea into the harbor — enough to clog shipping lanes — but touched nothing else. The identities of the raiders were kept secret, some for the whole of their lives. The next day, Paul Revere set out on a ten-day ride to New York and Philadelphia to spread the news.

As punishment for destroying the tea, Parliament closed the port of Boston to all but ships delivering food and fuel. The harsh response increased support for colonial resistance among moderates on both sides of the Altantic and moved other colonies to rally to Massachusetts' side.

The end result was to increase the number of colonists who would soon come to support separation from Great Britain.

Defiance of the Patriots: The Boston Tea Party and the Making of America, by Benjamin L. Carp. New Haven: Yale University Press, 2010.

On this day in 1799, William Dawes died. The first man to be dispatched on the night of April 18, 1775, Dawes carried the same message as Paul Revere, but while Revere rowed across the...