The presiding officer then presented Mayor Hugh O’Brien as a gentleman who was going to bring down the tax rate for this year to about $13.

As the Mayor arose he was greeted with loud applause. His honor said he always felt at home among the produce dealers who had been his business neighbors for so many years. There were very few people, he said, who understand the magnitude of the produce trade which represented, at the least, a yearly business of $100,000,000. For instance, the city of Boston now packs more pork than any other city in the Union. Last year a single member of the Boston Produce Exchange packed $10,000,000 worth of pork. This represented 588,000 hogs, which was more than all the dealers in Chicago did put together. The Mayor said that it was stated that Boston was to have inspectors of eggs, beans and other articles. He did not believe in it, and did not think the produce men did either. It was a good thing to have an inspector of milk and provisions, but, in his judgment, that was enough. He complimented Lieutenant-Governor Ames, and expressed the hope that when Governor Robinson retired his mantle would fall on Lieutenant-Governor Ames.

John J. Donovan In 1846, at age thirteen, John J. Donovan came to Lowell, Massachusetts from Yonkers, New York. His widowed mother, who was born in Ireland, worked hard in Lowell to support him while he attended public schools. As a young boy he saw many poor and hungry Irish people coming to Lowell, escaping the horrific famine in their homeland. He went to Lowell High School, which was somewhat unusual but not impossible for an Irish lad, and after graduation, worked in a grocery store on Central Street. The store's owner, David Gove, was an old Yankee from New Hampshire. In the late 1860s, Gove took Donovan in as a partner. A few years later he owned the entire business. In 1873, he built a new grocery store on Central Street. This 3 1/2 story brick building was one of the fanciest stores in the neighborhood. Eventually, he invested in other businesses, including a paper mill in nearby Dracut. Donovan became active in city politics in the early 1880s, serving as a board member for Lowell's overseers of the poor. In 1882 he ran for mayor on the Democratic ticket. He won a close election, becoming Lowell's first Irish-American mayor. He was re-elected by an even larger vote the following year. With his wife, Mary E. Seede, he settled in a home on Branch Street. They had a son and three daughters. Two of their girls graduated from Smith College. In the 1890s he devoted time to new business ventures, as president of the Washington Bank and manager of the Coburn Bobbin & Shuttle Company. Some said of him, "Look what has become of this once-poor Irish boy from Lowell." Irish Catholic Genesis of Lowell by George Francis O'Dwyer, 1920.
John J. Donovan Lowell Irish Mayor January 5, 1883

I currently live across the street from the site of John Donovans former home. Unfortuantely it burned down in the early 1990's and now stands two houses on the spot. Oddly enough another lowell mayor John A.G. Richardson also lived there, and he too started out in the grocery business.
Boston's Irish Mayors.

Hugh O'Brien did indeed pave the way for future Irish Cathloic mayors; those that followed were: Patrick Collins, John "Honey Fitz" Fitzgerald, James Michael Curley, Maurice Tobin, John Kerrigan, John Hynes, John Collins, Kevin White, and Raymond Flynn. The message is: other ethnic minorities will rise to the office of mayor and beyond. An additional message is that with all our new high tech society we don't have many mayors like Hugh O'Brien who can expand services, lower taxes, and not greatly increase debt at the same time. Keep in mind he did this while the "Yankee Republicans" controled the legislature and thereby succeeded in placing operating and manigerial restrictions on O'Brien. A Bust of Hugh O'Brien, by American Sculptor John Donoghue (1853-1903), may be found in the Bates Room, of the Boston Public Library.
Login

On this day in 1885, Hugh O'Brien, the first Irish immigrant elected mayor of Boston, took the oath of office. A new era was beginning. For several decades, the Roman Catholic Irish had outnumbered the native-born Protestants, who were now forced to give up their long domination of Boston politics. As a well-spoken, mild mannered, successful businessman, O'Brien defied all the Yankee stereotypes of Irishmen. During four terms as Mayor, he widened streets, planned the Emerald Necklace park system, and built the new Boston Public Library in Copley Square, all the while cutting taxes. Popular among both native- and Irish-born Bostonians, Hugh O'Brien paved the way for the better known Irish mayors who would follow him — "Honey Fitz" Fitzgerald and James Michael Curley. 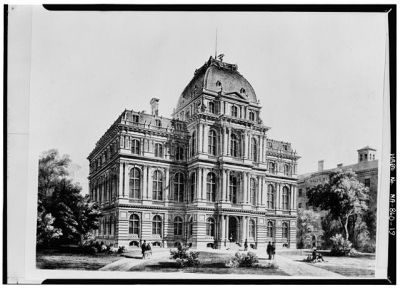 When Hugh O'Brien was sworn in as Boston's first Irish-born mayor in 1885, it marked the beginning of a new era in Boston politics. The city had long been controlled by native-born Protestants—generally called "Yankees"—most of whom had a stereotypical view of Irish immigrants as poor, ignorant, undisciplined, and under the thumb of the Catholic Church. But the Irish-born population of Boston was exploding, growing from 2,000 in 1820 to 7,000 by 1830. By 1855, it was 44,000; 25 years later, more than 70,000 Irish lived in Boston. By 1885, the Irish were over 40% of the city's population. They were the largest group of foreign-born residents and outnumbered the native-born Yankees.

Although the Yankees maintained their economic and social dominance of Boston, in the years after the Civil War they were forced to recognize the potential political power of the city's Irish Catholics. During the middle decades of the nineteenth century, the native-born vote grew only 14.7% while the largely Irish foreign vote grew 195%. The typical Yankees' attitude towards Irish immigrants turned from scorn to fear. To break into mayoral politics, the Irish needed a candidate who could quiet these fears. Hugh O'Brien was just such a man.

Born in Ireland in 1827, he moved with his family to Boston when he was five—well before the potato famine sent waves of impoverished Irish men and women to Boston. He spent seven years in the Boston public schools, and was apprenticed to a printer at the age of 12.

Working first for the newspaper Boston Courier and then for a Boston printer, Hugh O'Brien excelled at the printing business. He was made a foreman when he was only 15. He started his own publication, Shipping and Commercial List, and was soon successful enough to become a respected member of the Boston business elite.

O'Brien's business success, and the wealth and position it gave him, drew the attention of Patrick Maguire, publisher of The Republic newspaper and the unofficial head of Irish politics in Boston. He orchestrated the election of Hugh O'Brien to the city's Board of Alderman. O'Brien's seven years on the Board were characterized by fiscal restraint, hard work, and an utterly respectable demeanor. Articulate, responsible, and well-to-do, O'Brien defied Yankee stereotypes of Irishmen.

In the weeks before inauguration day, the state legislature passed bills to limit the new mayor's power.

By 1883 Patrick Maguire had decided that the time had come for Boston to elect an Irish-born mayor. He devised a two-part strategy. O'Brien would be the public face of the campaign, an able public official who criticized the previous administration for increasing taxes. O'Brien's pledge to reduce the tax rate without cutting city services appealed to the Yankee tradition of frugality. Meanwhile, behind the scenes, Maguire developed a system of Irish ward bosses who visited each household in the neighborhood and made sure that every eligible Irishman voted for O'Brien. Hugh O'Brien swept 15 of Boston's 25 wards. On December 10, 1884, he became the first Irish Catholic to be elected Mayor of Boston.

Many in the former administration feared that O'Brien's election would be followed by a wave of Irish appointments to key positions. In the weeks before inauguration day, the state legislature passed bills to limit the new mayor's power. To prevent O'Brien from appointing friends and relatives to city jobs, the legislature passed a civil service law to regulate the hiring and promotion of state and city employees. Liquor licensing and oversight of the police department were removed from the mayor's jurisdiction and placed under the control of a special commission appointed by the governor.

O'Brien surprised the opposition by governing the city in a conservative and honest way.

O'Brien surprised the opposition by governing the city in a conservative and honest way. He did indeed cut tax rates; he also widened streets, established the commission that hired Frederick Law Olmsted to design the Emerald Necklace park system, and built the new Boston Public Library in Copley Square. He disarmed his critics by enlisting Yankee and Republican businessmen to serve on the committees overseeing these projects.

Meanwhile, during O'Brien's four terms in office, the system of Irish neighborhood bosses blossomed and the Irish political machine matured. While O'Brien appeared to the Yankees as the ideal, disinterested civil servant, the Irish community saw his role as meeting the day-to-day needs of beleaguered constituents in exchange for political patronage. Over the next half century, the Boston Irish would build a formidable political machine that consistently turned out voters in support of men who would provide jobs, assistance, and protection for their Irish constituents. In return, these politicians could expect to have the loyalty—and the votes—of their fellow immigrants.

Because Hugh O'Brien did not publicly endorse such "ethnic politics," he retained the support of both native- and Irish-born Bostonians. Within a generation, "Honey Fitz" Fitzgerald, James Michael Curley, and other Irishmen would follow O'Brien into City Hall. Their irreverent, brash, and confrontational brand of politics would pit the Irish neighborhoods against the downtown Yankees. By the 1930s, the Irish political machine dominated Boston politics to a degree that would have been inconceivable on the day that Hugh O'Brien was sworn into office.

The Irish Heritage Trail provides a self-guided three-mile walking tour of important sites in the history of the Irish in Boston.

The Boston Irish: A Political History, by Thomas H. O'Connor (Back Bay Books, 1995).

On this day in 1847, Boston's leading citizens held a meeting at Fanueil Hall in response to news of the famine devastating Ireland. With the failure of the potato crop several years in a row,...