CAMERA CATCHES TRUMAN IN 'COME ON' TO GUESTS

As the band up "Hail to the Chief!," several of the guests on stage, including Governor Earl Warren of California, were uncertain, when to leave. The President cast a backward glance and, acting as inconspicuously as possible, discreetly beckoned to them to come on. The camera caught the whole incident.

Quote: Originally posted by: EdTr "...in the 1950s only [in] a minority of American households had TVs."

Might I respectfully disagree that the line as originally written is grammatically correct.
Login

On this day in 1951, anyone in Boston with access to a television set could be part of history — a program was transmitted live from coast-to-coast for the first time ever. President Harry Truman's opening speech at the Japanese Peace Treaty Conference in San Francisco was broadcast to an audience of 40,000,000 people, by far the largest audience for any presidential address in American history. Both the content and the technology were significant. The Peace Conference would formalize the end of hostilities with Japan, opening the door for Japan's economic recovery, while the broadcast initiated a new era in telecommunications. 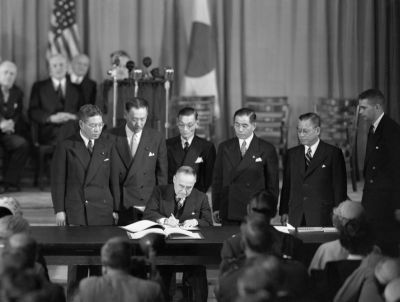 The linking of the country in a simultaneous broadcast evoked the day in 1869 when the "Golden Spike" was driven to mark the completion of the first transcontinental railroad. Only this time the new connections were carrying words and pictures, not passengers and freight.

As soon as World War II was over, the number of TV stations, almost all located in cities, began to grow exponentially. In 1946 six stations were broadcasting to about 20,000 households; by 1950, 98 stations were reaching approximately 7,000,000 households — nearly one in every ten. In Boston, WBZ broadcast the first commercial TV programming in June of 1948. Since these early stations had relatively weak signals (the average range was 50 miles), they were linked by coaxial cables — a relatively primitive technology.

But wiring the entire nation was an expensive proposition. In 1948 AT&T invested $40,000,000 in an experiment. The company used microwave radio technology to transmit a television signal from San Francisco to Chicago, and then existing coaxial cables to carry the signal from Chicago to the East Coast. This made it possible for people in over 50 cities across the country to view the same programming at the same time.

In Boston, WBZ broadcast the first commercial TV programming in June of 1948.

The opening session of the Japanese Peace Treaty Conference in San Francisco represented the first trial for the experimental system, and it was a success. Eighty-seven stations all over the U.S. received and broadcast Truman's speech.

Regular network shows soon followed. Within a month, "I Love Lucy" debuted on CBS, and other networks introduced variety shows hosted by such stars as Red Skelton and Eddie Cantor. The increasing concentration of the television industry in New York and Los Angeles led to a decline in the importance of Boston as a cultural center.

Even with coast-to-coast coverage, in the 1950s only in a minority of American households had TVs. Reception was poor or non-existent outside of urban areas; moreover, a television still represented a major expense. Although in 1950 the cost had already dropped from $400 to $100 (about $800 in today's dollars), a TV set was still beyond the means of the average family. Five years later, half of all American households owned at least one television; by the early 1960s, TV had become the ubiquitous presence it is today. The railroad, the telegram, then movies, and radio broadcasts had all helped create an increasingly national culture, but television accelerated and intensified the process.

On this day in 1993, the sitcom "Cheers" aired its 275th and final episode. One of the most popular shows in television history, "Cheers" was set in a bar modeled on the Bull and Finch...