A mysterious 84-year old millionaire from the North End slums who once peddled penny fruit, today presented the Boston Public Library more than $1,000,000 to start off a $3,000,000 trust fund.

The gift will be known as the John Deferrari Foundation, to perpetuate the name of the poor boy who ran a basket of fruit into millions of dollars, yet lived so secretively he is not known by his neighbors, and has only General Delivery, Boston as his address.

He gave his money to the library partly as a gesture of appreciation for the help he received from its books, but primarily, he said, to inspire young Bostonians to realize, as he did, the American dream of success.

. . . The library was not just an inspiration. It was a positive, constructive help. He regretted, he confessed today, he never had time to read history or great literature. But before he risked his dollars, he would visit the library to study the volumes on law, particularly real estate law, and books on economics and statistics.

I had thought the first children's room or library in the nation was in Arlington. See this web page. (http://www.robbinslibrary.org/about/history) Which is right?
An alternative version.

With all due respect I should like to present an alternative version of John DeFerrari's life story, as told by his sister. My research comes from an AP story published in Thursday, May 5, 1950 edition of the Lewiston [Maine] Evening Journal, on pages 1 & 5. This story can be verified at: http://news.google.com/newspapers?nid=1913&dat=19500504&id=XrU0AAAAIBAJ&sjid=_WYFAAAAIBAJ&pg=6235,3256467 The first paragraph of the story reads as follows: "A peddler-to- multi millionaire story told in the best Horatio Alger tradition about philanthropist John DeFarrari was branded just a myth toady." John's sister Emilia DeFarrari of Brookline told of how she and her "brothers and sisters grew up in a big 14 room house owned by her father, an importer, who owned stores, real estate, [and] warehouses." Emilia further implied John never was what the legend proclaimed, "a fruit peddler or poor boy who sold apples from a basket." He did at times deliver orders for his father. The father, according to Emilia, gave all "a very good home and a fine education, to those who would work for it." As a result some siblings went to college and others didn't. John was only interested in making "money and to invest it wisely." College didn't interest him; however, when he wanted to learn about something he fully utilized the services of the BPL. The foregoing is not intended to diminish the character, charitable works, and philanthropy of John DeFarrari, which quite the contrary speaks positive volumes about the man. The intention is to merely point out there is an alternative version to the story.
Login

On this day in 1947, self-made millionaire John Deferrari donated over $1,000,000 to the Boston Public Library to express his gratitude to the institution he credited with his success. The son of poor Italian immigrants, Defarrari used the library's resources to transform himself from a hard-working fruit peddler into a wealthy, if eccentric, investor. When the BPL was established in 1848, it was the first publicly supported municipal library in America. It soon introduced a truly revolutionary idea: it allowed people to borrow books. Other innovations followed. In 1870 it opened the first branch library in the United States. In 1895 it was the first to establish a room specifically designated for children.

He set up his Quality Fruit Store next door to the building that then housed the Boston Public Library, and began to visit it regularly. There he read books on real estate, law, business, economics, and statistics. 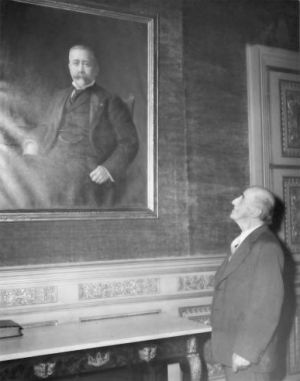 Shortly after the state legislature authorized Boston to establish and maintain a public library, some of the city's most prominent citizens began donating books. In 1852 one wealthy banker pledged $50,000 towards the acquisition of new books. By the time the library's first building, a two-room former schoolhouse on Mason Street, opened to the public in 1854, the library's collection numbered about 16,000 volumes.

The library needed more space almost immediately. On January 1, 1858, it moved to a new building on Boylston Street, where it remained for nearly 40 years. In 1887 the renowned architect Charles McKim won the commission to design a library in Copley Square in the city's newly fashionable Back Bay. McKim's "palace for the people" was completed eight years later with seats for 900 readers and shelf space for 628,297 volumes. Only the Library of Congress had a larger collection. The McKim Building, as it would be called, also housed some of the finest interior spaces and some of the most significant works of art created in late nineteenth century America.

McKim's "palace for the people" was completed eight years later with seats for 900 readers and shelf space for 628,297 volumes.

The increase in the city's population, combined with the explosion of scientific and technical knowledge, meant that the library would inevitably outgrow the McKim Building. John Deferrari intended that his gift be used to fund a new wing for the Central Library in Copley Square.

Deferrari took pride in the fact that, as he liked to say, he "became a millionaire without the benefit of a banker, a secretary, a bookkeeper, an automobile, or a telephone." But not, he would have added, without the benefit of a public library. Deferrari grew up in a North End tenement during the 1860s. He left school at 13 to help his fruit peddler father. His job was to sell fruit to workers in State Street offices. Daily contact with successful businessmen inspired the young man to improve his lot. He bought a pushcart, then a horse and wagon, and finally a fruit store in Dock Square.

When the Boston and Providence Railroad station opened in Park Square, Deferrari moved to Boylston Street — a choice that would change his life forever. He set up his Quality Fruit Store next door to the building that then housed the Boston Public Library, and began to visit it regularly. There he read books on real estate, law, business, economics, and statistics. He took a keen interest in any subject that might help him become a successful investor and conducted his research with passionate attention to detail.

Over time, John Deferrari invested his earnings from the Quality Fruit Store in stocks, bonds, and real estate holdings. By the time he was 28, he had left the fruit business and was devoting himself to the accumulation and exchange of real estate and securities. He always paid cash and never had an office; he used General Delivery rather than a post office box. He had no faith in banks or lawyers, relying instead on what he could learn at the library.

Three years before he died, John Deferrari expressed his appreciation to the institution that had played such an important role in his life. The original plan to construct a Deferrari wing evolved into a major addition, designed by noted architect Philip Johnson. When the new building opened in 1972, it included a hall dedicated to John Deferrari; a bust of the self-made man was placed in the Boston Room. In July 2016, the library completed a $78 million renovation of the Johnson Building, which brought the building's spaces and services up to twenty-first century tastes and needs.

Tours of the Central Library in Copley Square highlight the art and architecture of the buildings.

On this day in 1873, Amherst College junior Melvil Dewey made a proposal to the faculty. He had been working in the college library and was frustrated by the lack of logic in the way...

"On the Road" is Published