The Boston Policemen's Union is a reality. At two meetings of the patrolmen of this city, which were attended by about 1,400 men, the charter, granted by the American Federation of Labor, was accepted and the oath was administered to every man, amid cheers and applause.

. . . The fear that was supposed to obsess the policemen caused by the order of the Police Commission Edwin U. Curtis that they may not join a labor union, and by the report that all members would be discharged was shown to be missing by the large number of men who accepted nomination for office.

. . . [The] Report that the entire membership of the new union comprised of troublemaking young men was proven untrue by the number of men with four or five or six service stripes on their arms who entered the hall in full uniform.

The men in uniform made no attempt to conceal their identities, and if the alleged threatened action of Commissioner Curtis to discharge all union members is carried out, he can "fire" virtually every patrolman in the city.

Calling out the National Guard

It's been 9 years since Joe Ross pointed out errors regarding responsibility for military deployment. Why not make the simple correction?
The Given Day

The Given Day by Dennis Lehane gives a good fictional story about the event.
Typo

"The Commissioner of Police forbid [forbad or forbade] them to unionize."

Coolidge did NOT appoint Curtis. Curtis was appointed by Governor McCall in December 1918 a few weeks before Coolidge took office in January 1919.

On this day in 1919, Boston policemen seeking better wages and working conditions voted to form a union. The Commissioner of Police forbade them to unionize. Tensions escalated until, three weeks later, 19 officers were suspended for their union activities. Three quarters of the oldest police department in the country went on strike. Within hours, street gangs had taken over the downtown. For two days, vandals, looters, and perpetrators of violence ruled the streets. Order was restored only with the arrival of 4,700 bayonet-carrying soldiers. In Boston and around the country, the striking police were blamed for allowing the riots to occur. President Woodrow Wilson denounced the strike as "a crime against civilization."

Pay for new officers had been the same ($2.00 a day) for over 60 years. They worked 13 out of every 14 days. A normal workday ranged from ten to 13 hours, and officers received no pay for time spent testifying in court. 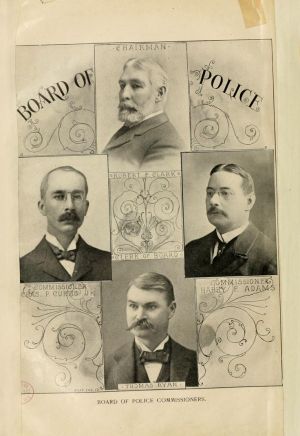 By 1919 Boston's policemen had every reason to feel aggrieved. Their pay was meager — they earned an average of 29 cents per hour, less than most of the city's skilled laborers — and they had not had a raise in decades. Pay for new officers had been the same ($2.00 a day) for over 60 years. They worked 13 out of every 14 days. A normal workday ranged from ten to 13 hours, and officers received no pay for time spent testifying in court. When their schedules required overnight duty, they slept in filthy, bug- and rodent-infested quarters. The only items of clothing the city furnished were a domed hat, wing-collared coat, and raincoat. The underpaid police had to dig into their own pockets to purchase their uniforms and boots.

The police commissioner ignored appeals for better wages and working conditions. The conflict between the commissioner and the police reflected both political and class tensions. Boston was predominantly Democratic, but it was the state's Republican governor, Calvin Coolidge, not the city's Democratic mayor, who had appointed the Commissioner of Police. Commissioner Edwin Curtis was a member of Boston's conservative Yankee elite; he had little sympathy for the mostly Irish Catholic force he oversaw. Like many Boston Yankees, he resented the growing political power of immigrants and the Democrats they elected to office. He saw little reason to grant concessions to either the police or to the Irish he believed were undermining the social order.

Inflation and the return of soldiers to the civilian workforce after WW I increased economic hardship, and labor militancy, across the nation. 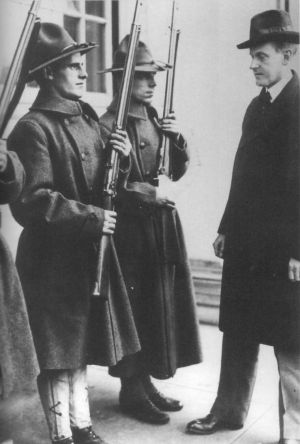 The Boston police were only one of many groups of workers seeking to organize. Inflation and the return of soldiers to the civilian workforce after WW I increased economic hardship, and labor militancy, across the nation. In Massachusetts alone, there were 396 strikes recorded in 1919.

To men like Curtis and Coolidge, strikes posed a threat to the very survival of democracy. Much of the nation was in the grip of the Red Scare, a general hysteria fed by the belief that radical immigrants and labor unionists were trying to bring about a revolution, like the one that had recently convulsed Russia. The Boston police planned to join the moderate labor organization, the American Federation of Labor, but Curtis was still alarmed.

In early August, he declared that policemen were "state officers," not "employees," and issued an edict forbidding them to unionize. On August 15th, over 1,000 angry policemen gathered at a hall in the South End. Invoking the spirit of 1776, they accused the commissioner of infringing on their rights as American citizens. They voted overwhelmingly to defy the edict and join the AFL.

1,117 policemen walked off the job. While disorder was almost instantaneous, at first it was relatively harmless.

The vote changed the focus from wages and hours to the right to unionize. On August 21st Curtis charged eight patrolmen — mostly union activists — with violating his ruling. On September 8th, he suspended 19 more.

The next day, 1,117 policemen walked off the job. While disorder was almost instantaneous, at first it was relatively harmless. Gamblers played illegal games of craps on street corners and the Common. Unruly young men crushed the hats of passersby and pelted police stations with fruit and eggs stolen from pushcart vendors. The city rang with the sound of false fire alarms. Then groups of teenagers began robbing pedestrians at will.

By 8 pm, a crowd estimated at 10,000 had gathered in Scollay Square. The mood had shifted from mischievous to menacing. When someone threw a brick that broke a cigar store window, chaos erupted. The mob smashed shop windows and looted stores, fought over their booty, commandeered streetcars, beat and robbed people who found themselves in the wrong place, and even raped women on street corners. Harvard students and young men from the business and commercial classes volunteered to help patrol the streets. When they did so, many were violently assaulted, as spectators cheered.

The next morning, Boston resembled a war zone; its streets filled with broken glass, discarded loot, and the detritus of the night's rioting.

The next morning, Boston resembled a war zone; its streets filled with broken glass, discarded loot, and the detritus of the night's rioting. To regain control, the mayor called in the Massachusetts Guard and town militia units. When guardsmen fired into an advancing crowd, wounding five men fatally, the violence began to subside. Only on the third day, with order almost restored, did Governor Coolidge finally deploy federal troops.

Most Bostonians blamed the violence on the police for leaving the city defenseless, rather than on the lawless mobs. Curtis refused to rehire any of the striking policemen, but several months later he did give the men who replaced them all the benefits they had been demanding. It would be 50 years before the nation saw another police strike.

Calvin Coolidge emerged a hero. The terrified middle and upper classes saw his actions as an heroic defense of democracy. When he proclaimed, "There is no right to strike against the public safety anywhere, any time," he became a politician of national stature almost overnight. Within two years, he would be elected vice president of the United States.

On this day in 1923, upon the death of Warren G. Harding, Calvin Coolidge was sworn in as President of the United States. "Silent Cal" had been the Republican governor of Massachusetts, little known outside...