OPENING OF THE NEW ORPHEUM

Tuesday evening, September first, the doors of the New Orpheum Theatre on Washington square will be thrown open to the public and the season of 1908-1909 will have been started.

Since the close of the theatre early in the summer . . . much work has been done . . . of which the city as well as Manager [Louis B.] Mayer may justly feel proud.

In this section of the country there are many theatres which provide entertainment for the public but it can be truthfully stated that none can surpass, while few will compare with the New Orpheum as it stands today. . . .

From the front the first thing that attracts the eye is the scroll work which is of the Gothic style of architecture. This harmonizes with the workmanship which shows strongly on the sides where the announcement boards have been built. In the center there is a large alcove in which place is located the box office, which is of new design in this section of New England. . . . The side balcony has been done away with and in its place retiring rooms have been added with all the latest and best comforts found in any of the large metropolitan theatres. The walls have been adorned with new tapestry while the ceiling has been tinted in beautiful colors to harmonize with the general pleasing effect. The new seats are of the latest make and are a decided improvement over the older ones. . . . The picture machines have been installed in an out of the way place, where they are boxed in and are up to the required details as presented by the state police. All in all everything is brand new, clean, cosy, up-to-date and homelike and nothing but words of praise can be heard from those who have already taken a peek at "the Little Theatre Round the Corner."

How horrible that the turning point in Mayer's career came as a result of distributing "Birth of a Nation." Liz
A shameful start?

Is this not carrying PC too far? Should not people be judged by the standards of their time? LB Mayer was really quite enlightened by early 20th cent standards.
Login

On this day in 1918, Louis B. Mayer traveled from his Boston office to New York City for the premiere of his first movie release, the silent film Virtuous Wives. A decade earlier, Mayer had opened his first movie theater in Haverhill, which he quickly built into one of the earliest and the largest theater chains in New England. He soon branched into movie distribution, and with his growing fortune, the former Chelsea scrap metal dealer moved his family from their Haverhill apartment to a Brookline estate. But Mayer's dream was to make his own movies. Virtuous Wives marked his entrance into movie production, and his exit from Massachusetts. Within months, he had moved to Hollywood, where Metro-Goldwyn-Mayer would soon become one of the world's leading motion picture studios.

He incorporated his own production company, pledging that he would make only "high-class films" with themes of honor, fidelity, decency, and virtue. 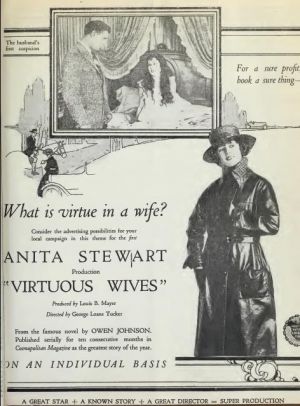 Sometime in the 1880s, when anti-Semitic pogroms were forcing Jews to leave Russia, a boy was born in a village outside of Minsk. His parents named him Lazar Meir. When the child was two, the family fled Russia. They settled in New Brunswick, Canada, where they struggled to make a living. The elder Meir worked as a peddler and scrap metal dealer in St. John; his sons scavenged for discarded metal in streets and trash bins. From time to time Lazar was sent to sell the scrap in Boston. When he was 19, he decided to move there. On his arrival, he re-named himself Louis B. Mayer. Years later he would admit that he took "Burt" as his middle name because he thought it sounded distinguished. He also made up a July 4th birthday because it suited his new American image.

Three years later, Mayer had a wife and young child to support, and his scrap metal business was failing. The family was forced to move into his in-laws' crowded Boston apartment.

He heard that the Gem, a burlesque theater in Haverhill, a town 32 miles northeast of Boston, was for sale. Louis B. Mayer had long been captivated by the entertainment business. As a boy he had hung around the local opera house, hoping to catch a glimpse of the silent film shorts that were shown between vaudeville acts. Now he saw a future in remaking personal images and creating fantasy lives. He borrowed enough money to lease the Gem. In the summer of 1907 he converted the manager's office into a small apartment and moved his family into the theater.

As a boy he had hung around the local opera house, hoping to catch a glimpse of the silent film shorts that were shown between vaudeville acts.

The Gem proved to be a shrewd investment. Haverhill was a working-class town of mills and shoe factories. Most of the 45,000 residents put in long hours at repetitive jobs and craved an inexpensive pastime. Few of them had frequented the Gem because of its seedy, disreputable reputation. Mayer saw a potential audience and set about transforming the run-down burlesque hall into the Orpheum, an elegantly refurbished theater devoted to "high-class films .. . the home of refined amusement." Then he launched a marketing blitz, hiring neighborhood boys to deliver flyers to every house in town; he held a three-day open house, served his wife's homemade cookies, and gave out free passes for the opening week's film.

Mayer positioned the Orpheum as "Havehill's Home of Refined Amusement." A typical newspaper ad promised "clean, wholesome, healthy amusement, no waits, no delays" and invited people to "come and laugh -- laugh hearty." He urged immigrants to visit the movies as an enjoyable way to learn American manners and improve their English. Soon workers were forming long lines outside the Orpheum as soon as they finished their shifts at the factory. The venture was an immediate success, and Louis B. Mayer was a Haverhill celebrity.

He now had the means and the reputation necessary to expand his business. He bought six theaters, each with a distinct identity. By 1910 he was building new theaters with grand lobbies, frescoes, marble staircases, and seating for 1,500. He branched out to other working-class Massachusetts towns such as Lynn, Brockton, and Lowell. Before long, Louis B. Mayer owned theaters all over New England.

In 1915 he acquired rights to distribute D.W. Griffith's film, Birth of a Nation throughout New England. That deal alone netted him half a million dollars — a veritable fortune in 1915. It gave Mayer the freedom to pursue his lifelong dream of making his own movies.

He incorporated his own production company, pledging that he would make only "high-class films" with themes of honor, fidelity, decency, and virtue. Mayer revered his mother and had a deep commitment to defending womanhood, especially motherhood. His films hit a popular note in postwar America. Virtuous Wives got his movie-making career off to a profitable start.

By 1919 Mayer had outgrown New England. He moved his family and his company to Hollywood. There, as the boss of what became the Metro-Goldwyn-Mayer studio, he presided over one of the most successful film companies of the movie-mad 1930s. He discovered and nurtured stars such as Greta Garbo, Clark Gable, Jean Harlow, Joan Crawford, Judy Garland, and Spencer Tracy. MGM hits included Ben Hur, the Marx Brothers' Night at the Opera, The Wizard of Oz, and Gone with the Wind, produced by his son-in-law. Some people found his paternalistic ways endearing; others hated his manipulative, controlling manner.

World War II changed American movie tastes; after the war, films made according to Louis B. Mayer's formula began to fall out of favor. In 1951 he was forced to resign from the company he had founded. He died in 1957.

The Essex Gateway Mural is located on the former site of Mayer's Orpheum Theater.

Lion of Hollywood: The Life and Legend of Louis B. Mayer, by Scott Eyman (Simon and Schuster, 2005).

On this day in 1915 Boston's African American community protested the showing of the racist film The Birth of a Nation. When 800 black women gathered at a Baptist church, one speaker suggested that "if...

On this day in 1997, Miramax released "Good Will Hunting," a movie about the collision of two Boston-area cultures: the heady, prestigious world of Cambridge academia and the proud but gritty working-class brotherhood of South...