Thirteen persons were injured and scores taken into custody in the Roxbury, North Dorcester and South End areas of Boston, after a night of sporadic disturbances.

No one was hurt seriously, according to officials at Boston City Hospital.

At 3 a.m., police were unable to estimate how many people they had picked up or booked.

Police said property damage was most severe in the Grove Hall area and along Blue Hill Avenue in Roxbury. Most of it was caused by gangs of youths who were still roaming the area at 3 a.m.

At midnight after the gangs began stoning cars, police sealed off an area approximately two miles square around Grove Hall. All traffic except police patrols was diverted from Blue Hill Avenue, Warren Street, Quincy Street and other main arteries…

Mayor White went immediately to City Hall after hearing of Dr. King's death and remained there with key staff members through the night.

Police said the first reports of trouble in Roxbury came shortly after 9 p.m., as news of Dr. King's death spread throughout the area.

On this day in 1968, Boston crackled with tension. African Americans, enraged by the assassination of Martin Luther King, Jr. in Memphis, took to the streets. Community leaders urged calm, police showed restraint, and while there were scores of arrests, no one was seriously hurt. However, riots in more than 100 cities across the country resulted in millions of dollars worth of property damage and 46 deaths. The next day, all of Boston public schools held memorial services. Thousands of people, black and white, gathered on Boston Common to pay tribute to the "minister of peace", the nation's greatest civil rights leader — a man from Georgia who liked to call Boston his second home.

In the fall of 1951, King came to Boston to pursue a doctorate in systematic theology. 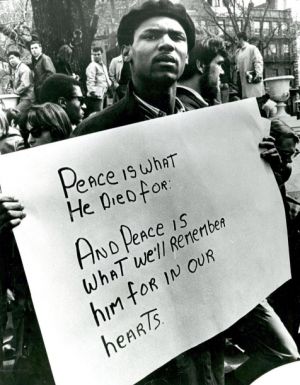 Since first encountering the work of Mahatma Gandhi as a student, the Reverend Dr. Martin Luther King, Jr. had espoused nonviolent protest. He was distressed when riots broke out in Los Angeles, Newark, Chicago, Philadelphia, and Detroit in the mid-1960s. However, even as he condemned the rioters, Dr. King understood their anger. In the last years of his life, his work expanded beyond fighting segregation in the South to opposing the war in Vietnam and battling poverty and racism across the country.

One of Dr. King's many stops was Boston in late April of 1965. First he met with the governor and then addressed a joint session of the Massachusetts legislature. He reminded the legislators that segregation was not practiced only in the South; although he did not mention Boston by name, he stressed "school imbalance" and "de facto segregation"— issues that the city is still struggling with more than fifty years later.

The next day the Globe headline read, "'We Shall Overcome' Dr. King Leads 22,000 in March." It was a cool, partly cloudy Friday as Boston's "first gigantic civil rights march got underway," the Globe reported. Singing freedom songs, thousands walked from Roxbury to Boston Common, where Dr. King joined them.

"Little did I imagine that such a day was possible when I walked through this same Boston Common as a student 10 years ago," he said, referring to his years as a graduate student at Boston University. "This will go down as one of the greatest days that Boston has ever seen. . . . The vision of the New Boston must extend into Roxbury." It had started to rain but King continued. "We shall overcome" inequality and school segregation; "justice will roll down like great waters and righteousness like streams." A meeting with the mayor and many of the city's African American leaders followed.

"We shall overcome" inequality and school segregation; "justice will roll down like great waters and righteousness like streams."

When Dr. King was assassinated almost exactly three years later, the Globe recalled that he "used to like to call Boston 'his second home,'" having visited the city many times after living here as a graduate student. His first home was Atlanta, Georgia, where he was born on January 15, 1929.

After earning a degree in sociology from Morehouse College in 1948, he went on to Crozer Theological Seminary in Pennsylvania. He received his B.A. in divinity from Crozer in 1951. It was here that King discovered Gandhi's teachings and became a follower of the great Indian leader.

For the rest of his life, he wrote in his autobiography, "one of the tenets of my philosophy was the conviction that nonviolent resistance was one of the most potent weapons available to oppressed people in their quest for social justice." His fervent belief in nonviolent protest would have profound consequences for American history.

". . . one of the tenets of my philosophy was the conviction that nonviolent resistance was one of the most potent weapons available to oppressed people in their quest for social justice."

In the fall of 1951, King came to Boston to pursue a doctorate in systematic theology. He met Coretta Scott, a student at the New England Conservatory of Music, and they married in 1953. Two years later, King received his Ph.D. from Boston University.

The Birmingham bus boycott took place that same year. In 1957 Dr. King and 115 other black leaders met in Montgomery, Alabama, and formed the Southern Christian Leadership Conference (SCLC). In 1961 and 1962 King and his supporters urged the Kennedy administration to support congressional action on a civil rights bill. In 1963, Time magazine named him "Man of the Year."

The next year, Dr. King was awarded the Nobel Peace Prize. At age 35, he was the youngest person, only the second American, and the third black man to receive the honor. Always eloquent and remarkably optimistic, he explained to the audience in Norway that he had "an abiding faith in America and an audacious faith in the future of mankind. . . . I refuse to accept the view that mankind is so tragically bound to the starless midnight of racism and war that the bright daybreak of peace and brotherhood can never become a reality."

Spurred by the assassination of John F. Kennedy, Congress passed the Civil Rights Act in 1964. The following year, with King in the forefront, the SCLC chose Selma, Alabama, to begin its campaign to secure voting rights for southern blacks. King created controversy by widening his protest, attacking President Johnson's policies in Vietnam and, early in 1968, launching the Poor People's Campaign.

I refuse to accept the view that mankind is so tragically bound to the starless midnight of racism and war that the bright daybreak of peace and brotherhood can never become a reality."

Threats to his life were a regular occurrence; white supremacists had dynamited his home in 1957, and there were telephone threats before his visit to Boston in 1965. Threats were circulating again in Memphis, Tennessee, where he went to help organize sanitation workers in early April 1968.

In "I've Been to the Mountaintop," the famous sermon he delivered on the evening of April 3rd, King told an overflow crowd, "I don't know what will happen now. We've got some difficult days ahead. But it really doesn't matter to me now, because I've been to the mountaintop and I don't mind.. . I just want to do God's will, and He's allowed me to go up to the mountain. And I've looked over and I've seen the Promised Land. I may not get there with you, but I want you to know tonight, that we as a people will get to the Promised Land. . . . "

The next day, Martin Luther King was assassinated. In many American cities, some black residents were so enraged that they rioted, breaking windows, looting, setting fires, stoning police and firemen. In Boston, there were three days of unrest in the Grove Hall neighborhood of Roxbury. City leaders pleaded for calm, invoking Dr. King's abiding belief in nonviolence. At the request of Boston Mayor Kevin White, James Brown allowed his April 5th concert at Boston Garden to be televised, setting the stage "on fire" instead of Boston. The next day, nearly 5,000 people attended a peaceful rally in Franklin Park.

A concert film of the April 5, 1968, James Brown performance at Boston Garden is also available.

When in Boston, by Jim Vrabel (Northeastern University Press, 2004).

On this day in 1965, a white minister from Boston lay near death in an Alabama hospital. As James Reeb's life slipped away, his story was in every morning paper and on every evening news...