Published by Authority by his Excellency Francis Bernard, Esquire

Captain-general and Governor in chief in and over His Majesty's province of the Massachusetts Bay in New England, and Vice Admiral of the same.

Whereas yesterday, towards evening, a great number of people unlawfully and riotously assembled themselves together, in the town of Boston, armed with clubs, staves, etc. and with great Noise and Tumult, pulled down a newly erected building belonging to the Secretary of the Province and having done so surrounded his Dwelling House, pulled down part of his fences, Broke his window and at length with Force and Violence entered the House and damaged and destroyed his Furniture, and continued thus unlawfully assembled until Midnight, and committed diverse Other Outrages and Enormities to the great Terror of his Majesty's liege Subjects.

I have therefore thought fit with the five of his Majesty's counsel to issue this Proclamation, requiring all Justices of the peace, and all Officers, civil and military to use their utmost endeavors for discovering, apprehending and bringing to Justice any of the Persons concerned in the unlawful assembly aforesaid.

And I do hereby promise that whoever shall deliver and detect any of the persons concerned in the Outrages aforesaid, so that they or any of them may be lawfully convicted shall receive out of the Public Treasury of this province, the Sum of 100 Pounds as a Reward, to be paid upon conviction of any such offender or offenders. . . .

Given at the Council Chamber in Boston the 15th Day of August 1765 in the fifth year of the Reign of our Sovereign Lord George the Third, by the grace of God, of Great Britain, France, and Ireland, King, Defender of the Faith, etc. Francis Bernard

By his Excellency's Command JN Cotton, Secr. GOD SAVE THE KING.

On this day in 1765, the British official charged with administering the hated Stamp Act was hung in effigy from an elm tree near Boston Common. A small group of merchants and master craftsmen had staged the prank, but soon a large crowd gathered to vent their anger at the Crown's interference with colonial affairs. Over the next weeks, the great elm emerged as the place in Boston for protest meetings. People of all classes — including unskilled laborers, enslaved people, and women, who were normally excluded from official town meetings — flocked to the "Liberty Tree" to post notices, hear speeches, and hold outdoor meetings. The practice caught on, and with opposition to British rule mounting, Liberty Trees were soon found in many colonial towns.

No one could buy or sell land, write a will, become an apprentice, read a newspaper or almanac, or even play cards without paying the tax, but the heaviest burden fell on merchants, shopkeepers, and master artisans. 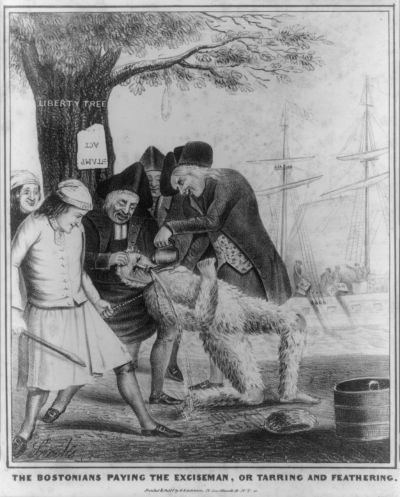 In colonial Boston there was a surefire way to gather a crowd: hang an effigy, or dummy, of just about any authority figure. Effigies were closely associated with November 11th, known as Pope's Day, when Protestant laborers reenacted an old English custom — hanging effigies of the Pope, setting bonfires, and brawling in the streets. In a fiercely anti-Catholic city, indulgent officials looked the other way while the lower classes used the excuse of an Old-World holiday for a bit of hooliganism.

But after Parliament passed the hated Stamp Act in the spring of 1765, colonial merchants and master craftsmen who bore the brunt of the new law used the rituals of Pope's Day to enlist the common people in political protest. They soon discovered that once incited, the mob had a mind of its own.

The Stamp Act was the first direct tax Parliament imposed on the American colonies. All paper items were required to carry a special stamp; the revenues from the stamp would be used to support the cost of administering the colonies. The impact of the Stamp Act was widely felt. No one could buy or sell land, write a will, become an apprentice, read a newspaper or almanac, or even play cards without paying the tax, but the heaviest burden fell on merchants, shopkeepers, and master artisans. They angrily denounced the act as "taxation without representation."

In a fiercely anti-Catholic city, indulgent officials looked the other way while the lower classes used the excuse of an Old-World holiday for a bit of hooliganism.

Two effigies were discovered at dawn on August 14th: one was a crude figure of Andrew Oliver, Boston's Stamp Act Commissioner and the brother-in-law of the colony's second highest ranking official, Lt. Governor Thomas Hutchinson. The other was a large boot, with a devil peeking out — a reference to the Earl of Bute, the English lawmaker who was the architect of the Stamp Act. As a crowd began to gather, everyone expected the usual — a day of mockery and high spirits.

But the men who organized the event had something more political in mind. They put on a carefully orchestrated bit of street theater, stopping each cart and "stamping" its goods. The large crowd included laboring men and women, apprentices, schoolboys, artisans, some merchants, and a few gentlemen disguised as artisans. At 5:00 pm the effigies were cut down, and a good-natured mock funeral procession passed the State House shouting "Liberty, Property and No Stamps." The marchers proceeded to the stamp office and pulled the little building down.

At 5:00 pm the effigies were cut down, and a good-natured mock funeral procession passed the State House shouting "Liberty, Property and No Stamps."

Crown officials quickly came to fear crowds that met at Liberty Tree, and the men who had engineered the events of August 14th soon learned that they, too, had something to fear. Out-of-door meetings were difficult to control. The line between liberty and license to riot was not easily maintained.

This was never clearer than on August 26th, when a bonfire was lit on King Street (today's State Street). A large and unruly crowd gathered. The object of their anger that night was Thomas Hutchinson, a man whose arrogance, ambition, power, and wealth made him one of the most unpopular men in Massachusetts. The mob attacked his house, one of the city's most elegant homes, where they proceeded to loot the contents and tear down walls and part of the roof, reducing the mansion to a mere shell. Several hundred people watched, without moving to stop the violence.

The next day, the men who had helped focus mob action on political targets were quick to distance themselves from the riot, which even the hotheaded Samuel Adams called the work of "a lawless unknown rabble." They sought to reassert control, but it was too late. The common folk had awakened to their political power.

British soldiers cut down Liberty Tree during their ten-month occupation of Boston in 1775. Today, a small plaque marks the site.

Visitors to Boston's Old State House learn about the events leading up to the start of the American Revolution.

A plaque identifying the site of the Liberty Tree is embedded in the wall of 630 Washington Street in downtown Boston.

Boston's Workers: A Labor History, by James R. Green and Hugh Carter Donahue (Trustees of the Public Library of the City of Boston, 1978).

On this day in 1738, David Kinnison was born in Old Kingston, Maine, or so he claimed. An early convert to the cause of American independence, he claimed to have participated in the dumping of...