Theodore Parker prepared a defense against the charge that he incited an abolitionist riot.

. . . Gentlemen, when the kidnappers [fugitive slave catchers] came to Boston [and] were seeking to kidnap the Crafts, I took Ellen to my own house, and kept her there so long as the (Southern) kidnappers remained in the city. For the first time I armed myself, and put my house in a state of defense. For two weeks I wrote my sermons with a sword in the open drawer under my inkstand, and a pistol in the flap of the desk, loaded, ready, with a cap on the nipple…. "A process was in the hands of the [federal] marshal... 'in the execution of which, he might be called upon to break open dwelling-houses, and perhaps to take life, by quelling resistance actual or 'threatened.'" I was ready for him. I knew my rights.

After the immediate danger was over … William and Ellen must needs flee from America. Long made one by the wedlock of a mutual and plighted faith, their marriage in Georgia was yet "null and void" by the laws of that "Christian State." I married them according to the law of Massachusetts. As a symbol of the husband's peculiar responsibility under such circumstances, I gave William a Sword … and told him of his manly duty therewith, if need were, to defend the life and liberty of Ellen. I gave them both a Bible, which I had bought for the purpose, to be a symbol of their spiritual culture and a help for their souls, as the sword was for their bodily life. "With this sword I thee wed," suited the circumstance of that bridal.

The Trial of Theodore Parker, for the "Misdemeanor" of a speech in Faneuil hall against Kidnapping, before the Circuit court of the United States at Boston, April 3, 1855, with the Defense, by Theodore Parker (n.p., 1855)

How timely! Tomorrow, I have plans to commemorate the assassination of Dr. King. His life and sacrifice are part of a long continuum of men and women who have been warriors for social justice. Thanks for this incredible contribution to today's class! ------------------------- Yvonne Powell
Thank-you!

I was looking forward to reading about Parker, but this Moment is really about the Crafts. Parker's life and career are worth the effort to research enough to focus on him. I really enjoy Mass Moments - - even in re-runs. ------------------------- Edmonia
Typo

"But after puzzling our brains for year," - should be "years"
Login

On this day in 1855, the case against Boston minister Theodore Parker came to trial. Charged with inciting an abolitionist riot, he defended himself by describing the horrors of slavery. He told the dramatic story of William and Ellen Craft, fugitive slaves from Georgia. The light-skinned Ellen had posed as a white man, and William pretended to be her slave, as they journeyed one thousand miles to freedom. In Boston, they received a warm welcome from the anti-slavery community. When their masters sent agents to reclaim them, abolitionists harassed the men until they gave up and left town. But Boston was no longer safe. The Crafts fled again, this time to England. They did not return to the U.S. until after the Civil War.

In the 200-page defense he wrote and later published, he equated morality with active, even if illegal, opposition to slavery. 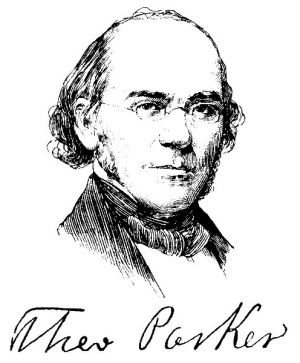 In April of 1855, Boston was abuzz with talk about a controversial court case. The Reverend Theodore Parker, whom friends and co-workers called "Minister to the Fugitive Slave," was to stand trial for inciting a riot.

The previous spring, Parker had addressed an abolitionist crowd gathered at Faneuil Hall. He urged them to take action to prevent a fugitive slave from being returned to his master. A riot did, in fact, follow Parker's speech, and he was charged with inciting it. Now, a year later, the case had come to trial.

Parker defended himself by attacking the immorality of slaveholders and all those who helped protect "the peculiar institution." In the 200-page defense he wrote and later published, he equated morality with active, even if illegal, opposition to slavery.

He drew upon the story — well-known in Boston — of a young couple who had, like many fugitive slaves, been his parishioners. William and Ellen Craft had made a 1,000-mile escape from slavery only to find themselves in danger in Boston. When slave-catchers came to reclaim them, Parker and other abolitionists defied the law and risked arrest to protect the couple.

The Crafts' story was compelling indeed. Both of them were born into slavery in Georgia. William's first owner was a gambler, who sold off his slaves one by one to pay his debts. When his master decided that a slave with a marketable skill would bring a higher price, he apprenticed William to a carpenter.

They agreed that she would disguise herself as a young white man traveling north attended by his slave.

Ellen was the daughter of a slave named Maria and Maria's master, Colonel James Smith. Bitterly resentful of the fact that the light-skinned Ellen was often mistaken for a member of the family, Mrs. Smith gave the 11-year-old girl to one of her daughters as a wedding present.

Ellen and William met in Macon, Georgia, in the early 1840s and fell in love. William described their condition as "not by any means the worst" still, they despaired at the thought of spending their lives in bondage. Knowing that as long as she was a slave, her children would be born into slavery, Ellen resolved never to marry and have children. "But after puzzling our brains for year," William recalled, "we were reluctantly driven to the sad conclusion that it was almost impossible to escape." They decided to get the consent of their owners and were married in 1846.

Almost three years passed before the couple devised an ingenious and audacious plan. Ellen was so light-skinned that she could pass for white. They agreed that she would disguise herself as a young white man traveling north attended by his slave. William used his savings to purchase the clothing and accessories that Ellen needed. She would cut her hair, don clothes befitting a gentleman, and wear dark glasses. At the last minute, they realized that Ellen would have to sign the guest register at their lodgings; it was illegal for slaves to learn to read or write, so they decided to bind her arm in bandages and say that they were going north to seek medical treatment. With an injured arm, she could ask others to sign for her without arousing suspicion.

For the next two weeks, the minister wrote his sermons "with a sword in the open drawer under [his inkstand], and a pistol in the flap of the desk."

On December 21, 1848, they slipped out of Macon. For four harrowing days, they traveled by train, boat, and stagecoach. Their ruse was nearly uncovered several times when fellow travelers or stationmasters questioned why a man would risk taking a slave to Philadelphia where he could so easily run away. William served his "master" with such devotion that Ellen could respond convincingly that she had little fear of that. Luck was on their side, and they arrived in Philadelphia on Christmas Day.

They remained there for several weeks before continuing on to Boston, where abolitionists hailed them as the heroes they were. They spent the next few months on a speaking tour of Massachusetts and then began boarding in the Beacon Hill home of black activist Lewis Hayden. Ellen worked as a seamstress and William as a cabinetmaker. He became both a successful tradesman and a leader in Boston's black community.

In September of 1850, however, a newly passed federal law, the Fugitive Slave Act, put them in jeopardy. Northerners were now obliged to help slave owners reclaim their "property." Within a month, two agents arrived in Boston looking for the Crafts. William barricaded himself in his shop while friends stood guard outside. The agents persisted, but William managed to get himself back to the Haydens'. Lewis Hayden armed his house with kegs of gunpowder and vowed to blow it up rather than surrender a single person under his protection. Ellen Craft went into hiding at Reverend Theodore Parker's home. For the next two weeks, the minister wrote his sermons "with a sword in the open drawer under [his inkstand], and a pistol in the flap of the desk."

Parker urged civil disobedience — to the point of violence if necessary — as a means of securing the freedom of slaves being sheltered in the North.

Anti-slavery activists harassed and threatened the agents and followed them everywhere. In the course of five days, they had them arrested five different times on charges such as slander and attempted kidnapping. Finally, the agents were intimidated into leaving the city.

The abolitionists were jubilant, but they knew that the Crafts were no longer safe, even in Boston. When the Crafts' former masters wrote to President Millard Fillmore for help, he replied that he would mobilize troops if necessary to see the law enforced. The Crafts decided that, like hundreds of other fugitive slaves, they would have to leave Boston. Since all the ports were being watched and guarded, they traveled overland to Nova Scotia, where they eventually boarded a boat to England.

The Crafts lived in England for the next seventeen years. They educated themselves, raised five children, and worked on behalf of abolition. After the Civil War, the family returned to the United States, where William and Ellen founded a school for freed slaves in their native Georgia.

The Crafts' story provided abolitionists like Theodore Parker with a dramatic example of why Bostonians should defy the Fugitive Slave Act. But southerners — and the federal government — were determined to enforce the law and return fugitive slaves to their owners. Like other radical abolitionists, Parker urged civil disobedience — to the point of violence if necessary — as a means of securing the freedom of slaves being sheltered in the North. When his case came before the court in April of 1855, all of Boston knew he would turn the trial into a debate on the morality of the Fugitive Slave Act. Reluctant to embroil himself in such an unpopular issue, the judge dismissed the case on a technicality, and Parker went free.

The Boston African-American National Historic Site interprets the Crafts' story, with emphasis on their time in Boston.

Running a Thousand Miles for Freedom: The Escape of William and Ellen Craft from Slavery, by William Craft. (William Tweedle, 1860, republished with a foreword and biographical essay by R.J.M. Blackett, Louisiana State University Press, 1989).