From a commercial and maritime point of view, Massachusetts at the beginning of the eighteenth century was the most prosperous, progressive and important of the American colonies. Boston, her largest seaport, had a trade with the other colonies and with foreign ports more important and lucrative than that enjoyed by any other American port. Her merchants and shipowners were bold, enterprising and farseeing; and to their energy and perseverance Boston's maritime supremacy was due. Many of them had followed the sea in early life, knew its dangers and hardships, and were ever ready and even anxious to aid in lessening its hazards by all means in their power. No one more fully appreciates the value of guides to navigation than the mariner and navigator who in the discharge of his duty has anxiously watched through the darkness of night and has waited for the dawn to reveal to him the entrance to his desired haven. Many of Boston's energetic citizens had that experience; in their enthusiastic efforts others joined, and as a result the first lighthouse on the American continent was erected at the entrance of Boston harbor. Forty-four years – nearly half a century – afterward, New York succeeded in having a lighthouse established as a guide to ships seeking her harbor. We cannot understand why she lagged so many years behind her then great rival, Boston, in this improvement; but so it was.

From "Boston Light and the Brewsters," by R.G.F. Candage, in The New England Magazine, October, 1895.

Good stuff, but is should be "automation" not "automaton" in the third from last paragraph.
Login

On this day in 1716, Boston Light on Little Brewster Island was lit for the first time. The first lighthouse built in North America, the structure weathered 60 years of lightning strikes and hurricane-force winds before the British Army blew it up in 1776. Seven years later, a 75-foot tower was built to replace it. The walls were 7 ½ feet thick at the base, 2 ½ feet thick at the top. In the eighteenth century, mariners were guided into the harbor by the light of tallow candles. In 1859 a powerful new lens was installed. It significantly increased the distance from which Boston Light's beacon could be seen. Today the beam is visible 27 miles out in the Atlantic.

At one point, as many as 16 children lived on the three-acre island. 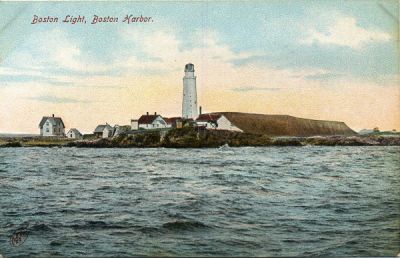 On July 23, 1715, the Massachusetts General Court authorized construction of a lighthouse in Boston's Outer Harbor, the cost to be paid by vessels using the harbor. The stone tower was ready for use by mid-September of the following year.

The first keeper, George Worthylake, was paid £50 a year to keep the beacon lit from sundown to sunrise. He supplemented his pay piloting vessels in and out of the harbor and tending his flock of sheep on neighboring Great Brewster Island. Just after noon November 3, 1718, Worthylake, his wife, daughter, a friend, and Shadwell, an enslaved man, drowned when their small boat capsized as they rowed to Little Brewster. The second keeper also drowned within days of taking over the position.

The third man to hold the job, John Hayes, fared better than his predecessors. Town officials accepted his recommendation that "a great Gun . . . be placed on the Said Island to [alert] Ships in a Fogg," and in 1719 the first fog signal in the colonies — a cannon — was put in place at Little Brewster. The keeper fired it every 30 minutes when visibility was poor. The cannon was used for a century before being replaced with a bell. It survived and today occupies a place of honor on the ground floor of Boston Light.

Town officials accepted his recommendation that "a great Gun . . . be placed on the Said Island to [alert] Ships in a Fogg," and in 1719 the first fog signal in the colonies — a cannon — was put in place at Little Brewster.

During the siege of Boston in 1775, General Washington decided that destroying Boston Light would increase the danger for British vessels coming into the harbor. On July 20th, Continental troops burnt the wooden parts of the lighthouse. British soldiers quickly began to repair the damage, but Washington sent men out to harass them. They succeeded in undoing the repairs, but the British had the final word: When the last of the fleet finally sailed away from Boston in June 1776, the British left behind a timed charge in the lighthouse. The explosion leveled Boston Light.

In 1783 construction began on a new Boston Light. This structure still stands, the second oldest lighthouse in the U.S. When Congress established the U. S. Lighthouse Service six years later, Boston Light came under federal jurisdiction.

In 1859 the lighthouse was raised by 15 feet and a 12-sided Fresnel lens installed. Invented by French scientist Augustin Fresnel in 1822, this extraordinary apparatus used hundreds of pieces of specially cut glass, with a magnifying glass in the center, to gather many light rays stemming from a single source into one very strong beam. Later in the century, new buildings were added — a duplex house for the keeper and the assistants' families, a boathouse, and smaller structures for the cistern, fog signal, and oil storage. These buildings are still standing today.

In 1861 . . . the worst shipwreck in the history of Boston Harbor occurred when the Maritana broke up on Shag Rocks, just a few hundred yards off Little Brewster.

It was common for wives and children to accompany, and sometimes assist, lighthouse keepers. At one point, as many as 16 children lived on the three-acre island. One young man proposed to the keeper's daughter at the top of the lighthouse. The wife of another keeper gave birth on the island. But the men and women of Little Brewster also witnessed heart-wrenching tragedies. In 1861, for example, the worst shipwreck in the history of Boston Harbor occurred when the Maritana broke up on Shag Rocks, just a few hundred yards off Little Brewster. People watched helplessly as passengers and crew fought for their lives in a blinding snowstorm and high seas. Several bodies washed up on the island, including that of the captain.

In 1939 the Lighthouse Service became part of the United States Coast Guard. After World War II, new navigational aids reduced mariners' dependence on lighthouses. Automation began in the mid 1960s, and the number of lighthouse keepers dwindled further. By 1990 Boston Light was the only lighthouse in the United States that had not been automated and still had a keeper — a state of affairs the Coast Guard and Congress desired to change.

"It's a lost art . . . They see lighthouses as living entities. We have to take care of the ones we have."

With the help of Senator Ted Kennedy, local groups campaigned to preserve the lighthouse. They reached a compromise: on April 16, 1998, Boston Light was automated, but a Coast Guard crew remained on the island to perform all other duties. In 2003 Sally Snowman, a member of the Coast Guard Auxiliary, became the 70th keeper of Boston Light and the first woman.

In August of 2006, two of the country's remaining ten lighthouse preservationists began the first major maintenance job on the Fresnel lens since it was installed in 1859. They dismantled rotation wheels and oily gears, filed and fixed jagged glass edges, and buffed each prism of the green-tinted lens with a soft-lint cloth. As Sally Snowman told the Boston Globe, "It's a lost art . . . They see lighthouses as living entities. We have to take care of the ones we have."

On this day in 1991, the Massachusetts Water Resources Authority ended an age-old practice of dumping sewer sludge directly into Boston Harbor. Proponents of the Boston Harbor Project celebrated this milestone in an 11-year, $3.6...