I was informed this morning by a son of Abraham that it was "the feast of trumpets" today, and was invited to accompany him to the synagogue. I was much surprised to learn that there was a synagogue in our city, for I have long felt great interest in, love to, and respect for the ancient nation — so interesting in their history, so wonderful in their preservation; so extraordinary in their present existence, yet until recently I have known but two Jews in Boston.

… The service was performed with more solemnity, earnestness and apparent devotion than I have seen in a far better synagogue, I was surprised that so many (there were about forty present) could read the Hebrew so fluently, and in most cases with a good degree of understanding, as appeared from their manner. Every man took a part in the service, and there was far more voice used than is often heard in the beautiful responsive service at Trinity or St. Paul's. They did seem to "lift their voices to God with one accord" and I hoped their hearts too. But alas! They have not a comfortable or decent place for the performance of that service which thousands of years ago swelled through the arches of Solomon's Temple, and the object of my communication is to ask if we cannot in some way aid them to a synagogue?

Let it not be said that they are opposed to Christianity, and therefore to aid them would be to aid opposition….

Unfortunately, the graphic cannot be edited at this time. We apologize for the confusion.
More Typos

On this day in 1844, members of Boston's first Jewish congregation petitioned city officials to set aside a corner of an East Boston cemetery for their use. When the city refused, the 40 congregants of Ohabei Shalom contributed five dollars each to purchase their own burial ground. Eight years later, they dedicated Boston's first synagogue. Located on Warren Avenue in the South End, it originally served the city's 125 Jewish families, almost all of whom hailed from German-speaking central Europe. In the late nineteenth century, large numbers of eastern European Jews immigrated to the United States; Boston was soon home to over 20,000 Jews representing a broad range of religious, cultural, and ethnic traditions.

. . . the Commonwealth did not grant Jews full rights of citizenship until 1821. 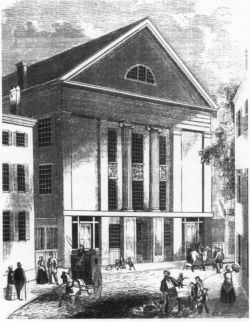 Individual Jews immigrated to Boston in the late seventeenth and eighteenth centuries, but larger numbers did not begin arriving until the mid-1800s. They came from many parts of central and eastern Europe; each group had its own character, shaped by the conditions and history of its native country. By the mid-1800s, Boston's Jews were numerous and prosperous enough to achieve an important goal: the building of a synagogue. But cultural differences between different groups were hard to overcome, and the vision of one central place of worship proved difficult to maintain.

Boston's first Jews struggled for acceptance in a community that was hostile to all non-Puritans. Boston's first recorded Jewish resident, a merchant named Solomon Franco who arrived from Holland in 1649, was not allowed to settle in the Bay Colony. The General Court voted to "allow the said Solomon Franco, Ye Jew, six shillings per week out of the treasury for ten weeks for his subsistence til he could get his passage into Holland."

Records show that a few Jews fared better than Solomon Franco. In 1674 a Portuguese Jew named Roland Gideon formed a business partnership with Boston merchant Daniel Barrow. In 1716 Jewish merchant Isaac Lopez opened a Boston establishment; a few years later, two other merchants followed in his footsteps. After the Revolution, several Boston Jews were pioneers in the insurance business.

The community grew so slowly in the 1700s that at the beginning of the nineteenth century there were still only a handful of Jews in Boston and no synagogue. In fact, the Commonwealth did not grant Jews full rights of citizenship until 1821.

The 1840 census found fewer than 40 Jews living in Boston, but that was about to change. The area of central Europe that is now Germany was home to large number of Jews. Most were German-speaking, but the northern provinces of Posen and Prussia also had large communities of Polish-speaking Jews. In the nineteenth century, facing new taxes, marriage restrictions, and growing pressure to assimilate into German society, many of these Jews chose to emigrate to the United States. Some of them would establish Boston's first Jewish community.

At first the numbers were small, but many immigrants were young and single and tended to marry quickly and start families. By 1860 the Boston Jewish community had grown to 1,000. Most were merchants, concentrated in the clothing business, and they often made marriages that united business and family interests. Although there were some cultural and religious differences based on place of origin, these immigrants had a strong sense of themselves as Jews.

In September of 1842, ten men — a minyam (the minimum number of adult males required for a religious service) — gathered at the home of Peter Spitz in Roxbury to observe the Jewish New Year. The next May, 18 men met there for the circumcision of Spitz's first-born son. The group decided to form a congregation and hired a man from Albany to serve as their cantor, teacher, ritual slaughterer, and circumciser. Adopting the name Ohabei Shalom (Lovers of Peace), they were Boston's first Jewish congregation. Their rented quarters in Boston's South End became the nucleus of Boston's Jewish community.

Disturbed by the German Jews' desire to assimilate into American culture, the Polish Jews objected to the adoption of English for prayer and the observance of the Sabbath on Sunday to accommodate Gentile business schedules.

One of the primary responsibilities of any congregation is to provide a burial place for its members. Ohabei Shalom took an important step on April 29, 1844, when it petitioned the city of Boston for a grant of land for this purpose. When the city refused the request, the members pooled their resources to buy a 10,000-square-foot lot at the corner of Byron and Homer Streets in East Boston.

In the early 1850s, the congregation began building a synagogue on Warren Street in the South End. A few non-Jews who admired Jewish piety helped the members finance the building.With a sanctuary large enough to accommodate all of Boston's 125 Jewish families, it also housed a school for Hebrew instruction, a room for congregational business, and a mikveh (ritual bath).

The period of unity was short-lived. Jews from German and Polish backgrounds soon disagreed over the selection of prayer books and religious rituals. Disturbed by the German Jews' desire to assimilate into American culture, the Polish Jews objected to the adoption of English for prayer and the observance of the Sabbath on Sunday to accommodate Gentile business schedules. In late 1853, after a brief quarrel over ownership of the building, the cemetery, and the name "Ohabei Shalom," the two groups split. The Germans formed a new congregation, Adath Israel, (today's Temple Israel). Their form of worship developed into Reform Judaism, while the more traditional form of worship favored by the Polish-speaking Jews became known as Conservative Judaism.

During the late nineteenth and early twentieth centuries, large numbers of eastern European Jews fleeing pogroms in Russia and Poland arrived in Boston and other American cities. They soon overwhelmed the German Jews. By 1900, there were 40,000 Jews in Boston, 80% of whom were from eastern Europe. Many of them clustered near the mouth of the Mystic River, in Chelsea, East Boston, Everett, Malden, Revere, and Winthrop.

Boston's established Jewish community did not necessarily welcome the newcomers. Most of the earlier immigrants had climbed the economic ladder and established themselves in business and community life; many had migrated from the "lower" South End to more affluent neighborhoods in Roxbury, Brookline, and the new "upper" South End. They felt little sympathy for or kinship with the impoverished, uneducated Old-World Jews. For their part, the Russian Jews distrusted the "Yankee Jews" and their liberal ways.

Through the early 1900s, the Boston Jewish community continued to grow; it became diverse and prosperous enough to support a wide range of institutions — Yiddish newspapers, progressive political organizations, fraternal and charitable societies. There were more than 50 synagogues in Boston, many more in surrounding area. By the mid-twentieth century, Chelsea is believed to have had the largest Jewish population north of Brooklyn. Ultimately, the variety of Jewish experience in the Boston area produced vibrant Jewish institutions, and a history of Jewish leadership in education, government, and philanthropy.

The Boston Center for Jewish Heritage is restoring the once-abandoned historic "Vilna Shul" on Beacon Hill.

Mystic River Jewish Communities Project is working to convert the chapel of the old Ohabei Shalom Cemetery in East Boston to a museum.

On this day in 1831, the legislature granted the Massachusetts Horticultural Society permission to purchase land for use as an experimental garden and a rural cemetery. Located on the border of Cambridge and Watertown, the...