ELIMINATION OF THE RAT

In the issue of the JOURNAL for September 21, 196 (Vol. clxxv, p. 397), we published, with editorial comment in another column, an important paper by Dr. Mark W. Richardson of Boston, formerly secretary of the Massachusetts State Board of Health, advancing the theory of the transmission of poliomyelitis through the agency of the rat flea. Immediately following the publication of this article, a movement was initiated by the Women’s Municipal League of Boston for the extensive destruction of rats in this city. The movement was originated by Mrs. Robert S. Bradley, and will be carried out under the management of Mrs. Albert T. Letherbee. Circulars and posters have already been issued, and the following statement of its purposes has been made by the League:

“Aside from its menace as a pathological agency, this economic loss due to rats is enormous. This creature is omnivorous and otherwise destructive, and there is no known commodity of manufacture and commerce that it does not injure. Government experts have officially proclaimed that rats consume property to the extent of $1.82 each per year, and that their number equals the human population. The rat is a menace to buildings in its liability to gnaw out supports and foundations, unless thoroughly rat-proofed, and in its ability to cause fires through gnawing of matches and the insulation from electric wires--which last item is computed to cost the underwriters about $15,000.000 yearly. The Women’s Municipal League intends to go about this matter in a perfectly practical manner along lines already proved effective. They will form rat clubs, which will work in cooperation through the entire city, which clubs will be instructed by competent rat catchers in the most desirable and effective methods of rat extermination. In this work they have the hearty support of the Mayor and the City Administration, and the endorsement and official cooperation of the City Board of Health. To prosecute properly this undertaking, it will be necessary to raise funds from public subscription, but as rats are destroying nearly one and one-half million dollars of property yearly in the city, the League feel that the people should be glad to subscribe a few thousands on this work, realizing that every rat killed means the extinction of its progeny, which are to be figured in the hundreds yearly. While they may hope that it may be possible with time, the enactment of proper ordinances and the general education of the people as to the true habits of rats, to make the city ratless, they know that much can be done now in exterminating large numbers. If San Francisco could in a few months destroy over 500,000 surely Boston can do as well. They hope for the generous support of the citizens.”

Whether or not Dr. Richardson’s theory is proved correct, that poliomyelitis is transmitted through the agency of rat fleas, it is well recognized by physicians that the rat, from many aspects is an important menace to the health welfare of the community. The Women’s Municipal League, therefore, deserves and will receive the cordial commendation and support of physicians in its efforts toward the elimination of the rat for the benefit of the public.

On this day in 1917, the Boston Women's Municipal League held the first — and as it happened, only — Rat Day. Increasing numbers of rats infested neighborhoods ranging from the overcrowded North End to the posh precincts of the Back Bay. The well-educated middle-class women who belonged to the League set out to remedy the problem. They launched an anti-rat education campaign, which culminated in "Rat Day." Prizes were offered to city residents who turned in the largest number of rat carcasses. Cold weather and a low level of interest among the public made for disappointing results. The event was not repeated. The problem was real, however, and the city of Boston picked up where the lady volunteers left off.

The League offered prizes for the largest number of rat carcasses turned in. 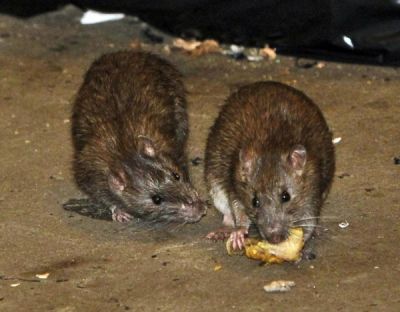 In the early 1900s, many middle- and upper-class American women were taking on new roles. Increasing numbers were attending college and pursuing careers in the new field of social work. Others participated in volunteer efforts to assist and uplift the urban poor. In both cases it seemed "natural" for women to focus on "social housekeeping," as the campaign to improve public health, education, and living conditions in the nation's cities was called.

In 1908, a group of well-to-do Boston women formed the Boston Women's Municipal League (BWML) "to promote civic betterment." According to the League's historian, the founders believed that "housekeeping of a great city was women's work. It was their province to see that the city was kept clean, as it was also their province to see that their own homes were clean. So obviously, the garbage and ashes should be promptly and scientifically removed from the streets and alleys, the markets freed from dirt, and dust, and flies, and the air cleaned from soot and smoke."

The BWML's founders were drawn from the city's most established families. The members were the wives and daughters of businessmen, ministers, professors, doctors, and lawyers. Within a short time, the League had a membership of 2,000. Their dues funded studies and programs, usually carried out by paid professionals; however, volunteer committeewomen managed many of the League's activities.

wealthy Boston women were spending time investigating the habits of rats and flies, the health risks they posed, and different methods of extermination.

BWML concentrated on three main areas of concern: public health, education, and social welfare. The Committee on Public Improvements and Sanitation almost immediately identified a serious problem with rats and flies. A subcommittee was formed.

It would no doubt have seemed strange to their mothers that wealthy Boston women were spending time investigating the habits of rats and flies, the health risks they posed, and different methods of extermination. The women became so well-informed that the committee was asked to endorse various methods of extermination. The League's reputation spread, along with the slogan: "If we have to go to New York for our hats, New York comes to Boston to ask about rats."

And not just New York. The League sent its anti-rat literature to every library in the U.S. and Canada, to scientific libraries in Europe, and to every major newspaper in North America. Requests for the materials came from places as distant as Australia, Brazil, India, and Russia.

Under the banner "Kill the Fly, Starve the Rat!" they presented illustrated lectures in high schools and movie theaters.

Soon the members determined that literature was not enough. Under the banner "Kill the Fly, Starve the Rat!" they presented illustrated lectures in high schools and movie theaters. Graphic posters of rats and flies appeared all over the city.

The BWML claimed that 750,000 rats infested Boston. People in the city's poorer districts had long lived with rats in their midst, but the excavations for the subway and Charles River Esplanade had driven rats into the wealthier Back Bay neighborhood. Shoddy building construction was a further stimulus to the rat population. The League's members were still denied the right to vote; they petitioned public officials to use concrete instead of wooden piers along the waterfront.

"If we have to go to New York for our hats, New York comes to Boston to ask about rats."

Rat collection points were set up throughout the city. The League offered prizes for the largest number of rat carcasses turned in. A similar campaign in London flushed so many rats out of the subway that grey rat skin had supposedly become fashionable material for bags and pocketbooks. The BWML prepared for a massive collection, but a cold snap a few days earlier and city residents' lack of interest kept the numbers low.

The League's campaign against the rat came to a head — and to an end — with Rat Day. While the Sub-committee on Rats and Flies ceased to exist, the city's rat problem did not. The era of volunteer-run public health programs was nearing an end. Paid employees of the Boston Board of Health carried on the work.

Today, almost 90 years later, the city devotes considerable resources to containing the rat population. When the "Big Dig" began, there was widespread concern that the project would displace millions of rats into Boston's North End and the waterfront. Eight million dollars was budgeted for rodent management. According to official statements, the program has been an unqualified success. The members of the Boston Women's Municipal League would no doubt be delighted by the large number of rat carcasses collected each day.

A scrapbook of the WMLB's campaign to rid Boston of rats is in the collection of the Bostonian Society.

On this day in 1905, five leprosy patients arrived on Penikese Island in Buzzard's Bay, the site of the first and only leprosarium in Massachusetts. Over the next 16 years, 36 victims of leprosy, or...

On this day in 1991, the Massachusetts Water Resources Authority ended an age-old practice of dumping sewer sludge directly into Boston Harbor. Proponents of the Boston Harbor Project celebrated this milestone in an 11-year, $3.6...