Old North Church is but a Bobby Orr slap shot away and Old Ironsides perhaps a Larry Bird jump shot from the Garden, but so few Bostonians have been to those shrines while so many —maybe all — have been to the Garden. So when Dan Rather, strangely out of place on this night the Garden closed, brought it all to an end by saying, ''A new era begins [tonight] when the FleetCenter opens,'' a cascade of boos rang down from the dusty, musty rafters of Boston Garden.. . . Larry Bird and Red Auerbach and Bob Cousy and John Havlicek all caught the magic of Boston Garden so perfectly when they described their love for a building no one could like but all Boston sports fans could love — it was the Garden fans who made the Garden the Garden. "Fifty years of my life were spent in the Garden," said Cousy, the magician whose tricks were the first to open Boston's eyes that there might just be another winter sport besides hockey. From his college days at Holy Cross to all those great years with the Celtics, said Cousy, the Garden was special to him."But it's still just a building," said the Cooz, initiating a theme that Celtic after Celtic repeated. "But a lot of the people sitting here are the ones who made the memories for us.". . . Auerbach would tell other "stupid coaches" about the dead spots in the parquet floor, "and I'd tell the other coaches, 'We know where the dead spots are.' " And they'd believe him, and they would think that is why the Boston Celtics were basketball's most successful team for generation after generation.But in truth, said Auerbach, "I want really to thank the fans. I think they had a lot to do with our winning. I really mean that sincerely because the fans were our sixth man. That's because everything in this building was so close and the fans really helped you.". . . For 67 years, Boston Garden was as far from corporate as could be. It was a real arena which no one liked but all Bostonians adored. Long after the ceremonies ended, thousands of fans remained and roared from their soul. Where the real memories of a real Garden will always bubble.

Today's article leaves out much history with respect to Music Concerts and Boxing. Besides those cited in the artice the following individuals and Rock Bands played the Garden: Elvis Presley; James Brown; The Rolling Stones, who Mayor Kevin White had to get out of a R. I. jail so they would be here for the concert or have a riot; The who; Led Zeppelin, the fans rioted when tickets went on sale; and the Greatful Dead, who between 1970 to 1994 performed 24 times in the Garden. I think most would agree the local boxing bouts featuring Boston's own Tony Demarco would be among the top highlights for boxing. On April 1, 1955 Demarco won the Welterweight Championship in the Garden with a TKO over Johnny Saxton. A little more than 2 months later he lost the title to Carmen Basilio in Syracuse, NY. The re-match took place in the Garden, in one of the best fights ever, with Basilio wining once more. When the Garden was razed it's seats were mounted on wood and sold as souvenirs, I was most fortunate to find 2 and give them to my sons as Christmas Presents.
The Grand Old Boston Garden.

"I think most would agree the local boxing bouts featuring Boston's own Tony Demarco would be among the top highlights for boxing. On April 1, 1955 Demarco won the Welterweight Championship in the Garden with a TKO over Johnny Saxton." I would agree. I wasn't there, of course, but I had an uncle who was. One for the ages..... ------------------------- private placement memorandum

On this day in 1995, the Bruins played the final game at the Boston Garden. For almost 70 years, the cavernous building served as the city's main sports arena and exhibition hall. Here the Celtics won national championships, the Bruins captured the Stanley Cup, and crowds of 16,000 or more watched some of boxing's most exciting matches. Evangelical preachers led revivals, politicians launched campaigns, and rock-and-roll superstars entertained. One of the most popular traditions at the Garden was the annual appearance of the circus. Inevitably, the obstructed seats and lack of air conditioning doomed the aging Garden. In 1995 a new arena opened. Parts of the parquet floor — the result of a post-war lumber shortage — were preserved for sentiment's sake.

Although the Garden would eventually be home to Boston's basketball and hockey teams, its original purpose was to serve as a venue for boxing matches. 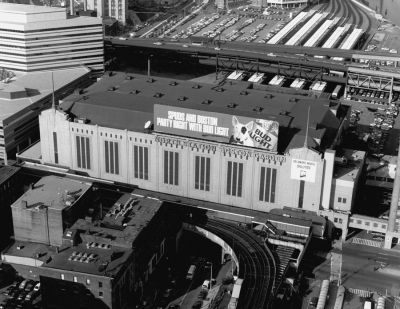 On a November evening in 1928, President Calvin Coolidge flipped a switch at the White House that turned on the lights at the spanking new Boston Garden. Three days later, the Boston sports arena and exhibition hall hosted its first event: local hero, "Honeyboy" Finnegan, won the World Featherweight Championship before a sell-out crowd of 14,000. Although the Garden would eventually be home to Boston's basketball and hockey teams, its original purpose was to serve as a venue for boxing matches.

The Boston Garden was part of New York boxing promoter Tex Rickard's grand plan. In 1926 Rickard had opened "Madison Square Garden," a boxing arena in an abandoned railroad station that P.T. Barnum had once used for circus performances. Rickard planned to open similar arenas in five other major U.S. cities, beginning with Boston.

In 1927 he announced that he would build "Boston Madison Square Garden" to the same specifications as his New York project. It opened the following year. Bostonians soon dropped the reference to Madison Square but kept the word "Garden" — a holdover from the days when the New York building had been filled with potted plants, fountains, and gravel paths. Rickard died a few months after the completion of the Boston Garden; he did not live to complete his grand plan.

It was not unusual in the 1930s for the building to resound with the shouts of Christian revivalists one day and the music for a dance marathon the next.

Although boxing was hugely popular in the 1920s and 1930s, the Garden was soon hosting many other events. Within a year of its opening, the capacity for skating had been added, and the Boston Bruins played their first game there. A standing-room-only crowd of more than 16,000 forced officials to call a 15-minute delay to allow fans who had paid $1.50 each for their tickets to fight their way to their seats. In the Bruins' history at the Garden, legendary hockey stars such as Bobby Orr, Phil Esposito, Cam Neely, and Ray Bourque helped the team win five Stanley Cups. The Celtics shared the Garden with the Bruins.

From early on, the Garden was also the scene of indoor tennis matches, figure skating competitions, roller derbies, track meets, and bicycle races. For many years, it was the city's largest exposition space. In 1935 the centerpiece of the winter exhibitions was a full-size indoor ski jump. The building was used for graduations, political conventions, and religious revivals. It was not unusual in the 1930s for the building to resound with the shouts of Christian revivalists one day and the music for a dance marathon the next.

". . . memories were still being made and dreams realized at rickety old Boston Garden."

The Garden also served as a setting for political speeches; Winston Churchill, Franklin Roosevelt, and Dwight D. Eisenhower all delivered orations from the Garden floor. Tradition has it that John F. Kennedy and his friend Dave Powers mapped out JFK's political strategy while watching a Bruins game at the Garden. Fourteen years later, on the eve of the 1960 presidential election, Kennedy held his last rally there before a crowd of 20,000; 10,000 more people stood outside.

After the final hockey game, Bruins stars from several generations took a final skate around the ice. Although greats such as Orr, Esposito, Neely, and Bourque were all there, the center of attention was Norman Leveille, who suffered a cerebral hemorrhage during his one year with the Bruins. Thirteen years later, Leveille walks with great difficulty but on the ice that night, a reporter wrote, "Leveille held his cane in front of him, while Bourque, facing him, pulled him around the ice; the crowd clamored in approval as eyes throughout the Garden filled up with tears . . . memories were still being made and dreams realized at rickety old Boston Garden."

The arena that replaced the original Boston Garden has had several names, but its current moniker, the TD Garden, is an homage to the history of Boston Sports. The TD Garden continues the tradition of serving as the home court and rink for the Boston Celtics and Bruins, and as a venue for other sporting events, concerts, local graduation ceremonies, and more.

The Boston Garden, by Richard A. Johnson and Brian Codagnone (Arcadia, 2002).