The [new] Emerson respirator was completed in May, 1931. It was far superior to the product [invented by Harvard's Robert Drinker]. Instead of a blower it employed a silent leather diaphragm. It was adjustable to any respiration rate. The cost was $1,000, instead of $2,300 or $2,000, the price of the other apparatus . . . It was put in use to save the life of a desperately paralyzed boy, . . .

This dramatic success marked the beginning of Drinker's open hostility. He was bitter at what he evidently felt was an invasion of the respirator market and spoke of legal protection against infringement…

[Appended are] the opinions of a few Warm Springs patients who have themselves been respirator cases.

Wilson Shippee, of Vermont, favors the Drinker. Except for the noise of the old Drinker, he considers both Drinkers superior to the Emerson, partly because of facility in putting on and taking off the neck-collar.

Frances McGoan, of Illinois, prefers the Drinker machine, but says this may be due to a sentimental attachment growing out of a long acquaintance.

John Peters, of Massachusetts, is strongly in favor of the Emerson. He has been in both, and says that the movement of patients in and out is easier, the mechanism is better, and the fact that the Emerson has an auxiliary pump in case of current failure makes it a far better machine.

In closing, the Editor…would like to call attention to the remark of Mr. Griscom's that in case of another epidemic, neither manufacturer alone could be able to supply the demand for respirators, and that healthy competition would stimulate the manufacturers to improve their machines and lower the costs.

Quoted in The Polio Chronicle, by Stewart Griscom, June 1933. Online.

And the iron lung's replacement

the modern respirator was developed by a man who grew up in Stoughton, Mass. and was recently featured on 60 minutes, the now 86-year-old, Forrest Bird. > > http://www.cbsnews.com/sections/60minutes/main3415.shtml
And the iron lung's replacement

As I recall, one of Bird's first advances in the technology came when he was assigned to fly a captured German plane back to the States in WWII. He noticed that the Germans had a more advanced air regulator than ours and after some tinkering he came up with adjustment to our regulators that permitted U.S. planes got go more than 5,000 feet higher than they previously could. After the war, he began work on the medical respirators.
Philip Drinker (not Robert)

The co-inventor of the iron lung was Philip Drinker, not Robert Drinker.
Iron Lung still in use?

Interesting that the Iron lung was in use as recently as 2004. I was not aware of that.
position of patient

On this day in 1928, Children's Hospital in Boston was the scene of the first use of an "iron lung." Developed by a young Harvard doctor, it was little more than a galvanized iron box, a bed, and two household vacuum cleaners. A little girl whose lungs were paralyzed by polio was placed in the airtight metal cylinder with only her head exposed. The 700-pound, 3 x 7 foot, galvanized metal machine breathed for her. Vacuum pumps connected to it drew the air in and out of the cylinder, causing the child's lungs to rise and fall in regular breaths. For the next 30 years, this invention would mean the difference between life and death for victims of polio. Development of the polio vaccine ultimately retired regular use of the iron lung.

One common side effect of being in an iron lung was that patients would hallucinate that they were moving, sometimes in the respirator, but more often in a car, train, or airplane. 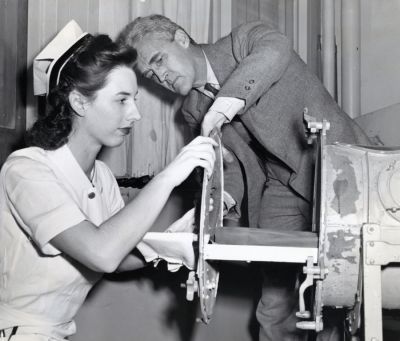 When Dr. Philip Drinker developed the iron lung in 1928, he was responding to a terrifying new disease that was causing sudden paralysis. Doctors called it poliomyelitis — or polio. The onset of the illness was sudden, with fever followed by acute paralysis. Those who survived were, like Franklin Roosevelt, often left with crippled limbs, dependent for the rest of their lives on braces or wheelchairs. In severe cases, the lungs were paralyzed, and patients died of suffocation.

Since many victims of polio regained use of some of their muscles over time, doctors knew that if they could keep patients alive through the acute early stage of the disease, there was a chance of recovery. Drinker's machine was designed to do the work of the lungs while they were paralyzed. Vacuums connected to it worked like a huge bellows. When they sucked air out of the chamber, air flowed in through the patient's mouth and nose, filling the lungs. As the vacuum was released, the lungs fell, and the patient breathed out.

The iron lung was the first advance in treating a disease that had baffled the medical profession. Unable to determine where the disease was coming from, doctors could prescribe only quarantine and careful hygiene in the hopes of preventing its spread. Desperate families consulted faith healers, bone-crackers, and herbalists, but polio continued to cripple and kill.

The iron lung was the first advance in treating a disease that had baffled the medical profession.

Between WWI and WWII, polio epidemics struck various parts of the country seemingly at random. Severe epidemics swept the United States in the summer of 1916 and several times in the 1930s, but the most devastating epidemic occurred in 1952. In time researchers discovered an irony: polio epidemics were an unintended consequence of improved hygiene. In an era of open sewers and privies, most people were exposed to the polio virus in infancy, when paralysis rarely occurs. When living conditions improved, the disease went from being so mild that no one even knew it existed to an epidemic of mysterious origins and unknown scope.

Although polio was commonly called infantile paralysis because of its tendency to strike children, youth and adults were not immune to the disease. Iron lungs were eventually built in all sizes. The metal cylinder had "port holes" through which nurses and doctors could watch the patient's chest rise and fall with the rhythm of the vacuum pumps. Once they got used to being confined, patients reported that they found the machine comforting.

In time researchers discovered an irony: polio epidemics were an unintended consequence of improved hygiene.

Most patients needed an iron lung for a period of weeks or months, but the lungs of some polio victims were permanently paralyzed; some people lived for years, lying prone in a metal box. One common side effect of being in an iron lung was that patients would hallucinate that they were moving, sometimes in the respirator, but more often in a car, train, or airplane. It was not unusual for patients to recall their iron lung "travels" in great detail, even after they recovered.

In the 1950s, an effective vaccine was developed for polio. The number of cases, and the need for the iron lung, plummeted. By the 1960s, patients with difficulty breathing were using a modern compact respirator. Although a few iron lungs are still in use, most have become museum pieces. As for the disease that motivated the iron lung invention, in developed nations a child is now "more likely to be struck by lightning than by polio." In 1959 there were 1,200 people using tank respirators in the United States; in 2004, there were 39.

To learn more about the history of medicine, visit the Paul S. Russell, MD Museum of Medical History and Innovation on the campus of Massachusetts General Hospital.

On this day in 1951 the Children's Cancer Research Foundation was incorporated. Founded by pioneering Boston physician Sidney Farber, it was the first cancer center in the country designed specifically for children. In the days...