The patient described what he felt under the influence of sulfuric ether:

As I recovered, I felt a numbness in my limbs, with a sensation like a nightmare, and would have given the world for some one to come and arouse me. I thought for a moment I should die in that state, and that the world would only pity or ridicule my folly. At length I felt a slight tingling of the blood in the end of my third finger and made an effort to touch it with my thumb, but there seemed to be no sensation. I gradually raised my arm and pinched my thigh, but I could see that sensation was imperfect. I attempted to rise from my chair, but fell back. Gradually, I regained power over my limbs and full consciousness. I immediately looked at my watch and found that I had been insensible between seven and eight minutes.

Quoted in Ether Day: The Strange Tale of America's Greatest Medical Discovery and the Haunted Men Who Made It, by Julie M. Fenster; New York, 2001.

Morton not the first to use ether.

Dr Crawford W. Long of Georgia, a graduate of the U. of PA, was the first to use an ether based solution to perform a medical operation. On March 30, 1842, in Jefferson, GA, Long used ether to successfuly remove a tumor from his patient's neck with no pain being experienced. Well before Morton's demostration in 1846 Long had conducted a number of such public demostrations prior to that date. While in college Long shared a room with Alexander Stephens who went on to become Vice President of the Confederate States of America. Dr. Long was also a cousin to another doctor, the western gunfighter and sometimes dentist Doc Holiday. Long County and Long Hospital at Emory U. are named after him. Likewise the Long Museum in Jefferson, Ga is named in honor of him. A statue of Long stands in the U. S. Capitol as one of the two designated to represent GA.
Anaesthesia/ Feeling No Pain

As one who had his tonsils "out", in the early '40's, I still remember the effects, and smell of ether! I believe it's the "gas form", or gas equivalent, of ETOH/alcohol, probably, the oldest "pain killer". Maybe people who abuse alcohol might ask themselves what pain they're trying to "kill"? I heard Morton got the idea from an old "party game", where people would get "stoned" by inhaling ether.
Ether

This is and was a truly momentous moment in history. Prior to this extreme pain was an almost expected occurence in most people's lives. This was a Godsend to humanity.
One More Player, Typo

Additionally, Horace Wells, Morton's former associate should be part of the story. He attempted to demonstrate nitrous oxide as an anesthetic at MGH in 1845. The dose was administered incorrectly, however, leading to obvious pain for the patient. The audience shouted "Humbug!" Hence the later "this is no humbug" quote. "Ether made brought about such a dramatic improvement that ..." - Lose the "made," and add "in patient care" before "that."
Daniel Webster on: "Discoveries & advancements"

"I am rather inclined to the belief that, for discovery, this age has certainly surpassed every other of which history renders an account. And I doubt whether any century in the future will be so prolific in discoveries beneficial to the race as ours has been. ýThink of it! Merchant vessels are having more or less STEAM applied to their navigation. Think of steam as applied to the railroad, and the changes it has wrought in society! ýThen take the discovery of ETHER, ý an event the full benefits of which we can hardly realize as yet. Just think of the human suffering prevented by that discovery! Think of the pain of amputations and other operations prevented in hospitals! "But the miracle of miracles is the TELEGRAPH. Whatever improvements may be made in the instruments of telegraphic transmission, the agent itself cannot be improved. It is impossible, because it is as quick as thought. Steam, Electricity, Ether, and the ten thousand things that have grown from them, ý think of it! I think that we who live in this nineteenth century have the advantage over all who have preceded us; and I think we shall have the advantage over the generations that are to follow. That is my opinion; and I thank God that it has pleased Him to assign my life to just this age of the world.ý - Senator Daniel Webster ------------------------- Jim Cooke
Login

On this day in 1846, a crowd gathered in the operating theater at Massachusetts General Hospital. A Boston printer with a tumor on his jaw lay on the table. Curious and skeptical physicians and medical students waited impatiently. Finally, Boston dentist William Morton entered the room carrying a glass inhaler with an ether-soaked sponge. He used this apparatus to render the patient unconscious. A surgeon then removed the tumor. After the patient recovered consciousness, he reported that he had experienced no pain but only a sensation like that of being scraped with a blunt instrument. The historic moment was proclaimed "Ether Day," and hailed around the world as "the greatest gift ever known to mankind." One London newspaper declared "WE HAVE CONQUERED PAIN."

Ether made brought about such a dramatic improvement that in 1868 a Boston businessman commissioned a monument "to commemorate the discovery that the inhaling of ether causes insensibility to pain." 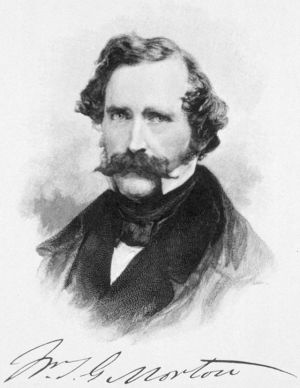 Dr. John Warren, one of the most respected surgeons of his day, was present in the operating theater at Massachusetts General Hospital when William Morton first demonstrated the power of ether. Warren later described what happened: Morton's "apparatus . . . consisted of a tube connected with a glass globe. This apparatus he then proceeded to apply, and after four or five minutes the patient appeared to be asleep, and the operation was performed."

Dr. Warren and the other men present were astonished that the patient did not shrink or cry out; he did move his limbs and speak unintelligibly, which seemed to indicate the existence of pain. On regaining consciousness, the patient reported that he had experienced no pain. As the man was carried from the operating theater, Dr. Warren turned to the stunned audience and said, "Gentlemen, this is no humbug."

Morton's "apparatus . . . consisted of a tube connected with a glass globe. This apparatus he then proceeded to apply, and after four or five minutes the patient appeared to be asleep, and the operation was performed." 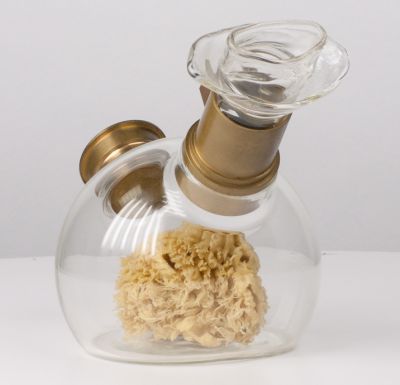 Fifty years later, an elderly Boston physician could still vividly remember the awful scenes of surgery in the days before anesthesia: "Yells and screams, most horrible in my memory now, after an interval of so many years." Doctors had tried many techniques to dull pain. They had used plants like marijuana, hypnosis, even causing pain elsewhere on the body. It was not unheard of for a patient to be knocked unconscious with a blow to the jaw. Opium and alcohol were the only effective analgesics, but to be strong enough for surgery, they had to be given in doses that could be lethal.

Ether made brought about such a dramatic improvement that in 1868 a Boston businessman commissioned a monument "to commemorate the discovery that the inhaling of ether causes insensibility to pain. First proved at the Mass. General Hospital in Boston." The 40-foot granite fountain still stands in the Public Garden. The operating theater at MGH where the experiment took place, renamed the "Ether Dome," is now a National Historic Landmark.

The Ether Dome at Massachusetts General Hospital is open 9:00 am to 5:00 Monday through Friday; it is closed periodically for use by hospital staff for meetings.

Visit the Paul S. Russell, MD Museum of Medical History and Innovation at Mass General to learn more about the hospital's history.

Ether Day: The Strange Tale of America's Greatest Medical Discovery and the Haunted Men Who Made It, by Julie Fenster (Harper Collins, 2002).