PERFECT ENDING TO A LEGENDARY TALE

The Larryfest was everything one could have imagined. It was a parquet coronation, a high-top Woodstock. It was Boston basketball's lifetime achievement award. Boston last night said ''thank you'' to an athlete who thrilled the Celtic fandom for 13 seasons. In a celebration of inaugural proportions, Larry Bird's No. 33 was hoisted to the rafters, where it will sway in the stale air alongside those of Bob Cousy, Bill Russell, John Havlicek and other Garden gods who delivered 16 world championships to our city.

"Tonight I leave," Bird told his loyal legion at the conclusion of the 2 1/2-hour love-in. "I leave basketball forever. I leave the game that I love. I'm saying good night, Boston. And may God bless each and every one of you."

He was done. He scooped up his one-year-old son, Connor, and ducked into the center court runway he's known so well for so many years. That was it. Larry had left the court in his Celtic warmups — for the very last time.

It would be difficult for any outsider to come to Boston and comprehend this city's unique attachment to a tall young man from Indiana. How do we explain a Boston skyscraper tower with night lights in a configuration of "33"? Unless you were here for the last 13 years, there's no way you could understand what the Larryfest was about.

Let's face it, Larry Bird never won a war; he didn't feed the poor or heal the sick. In our city's 20th century history, there was nothing like this for James Michael Curley, John F. Kennedy, Arthur Fiedler, Ted Williams or Bobby Orr.

Bird's mother, Georgia, said, "Whoever thought there'd be such a fuss about this little blond-headed boy?"

Bird's famous final scene was everything he and his fans could have wanted…Most of all, there were the people.

Bird could look over and see his mom, who stretched the family budget to buy him those Redball Jet sneakers.

Wearing his Laker warmups, Magic came out for one last summit meeting. Magic had a Celtic T-shirt under the purple-and-gold LA gear. It was something to see the two standing under the bright lights, wearing their old team colors. The only thing missing was a basketball.

Bird said, "There's no question Magic's probably the best player I've ever seen. I knew he was watching me, because I was watching him.

Please note the narrative should be updated to reflect the Great Boston Celtics have now won a total of 17 championships --- more than any other NBA franchise.
Number of Championships won.

This Mass Moment has been updated to reflect your suggestion, Zinc. Thank you.
Number of Championships won.

On this day in 1993, there was standing room only in the Boston Garden as the Celtics retired Larry Bird's number. In his 13 seasons with Boston, Bird emerged as the embodiment of "Celtics Pride." He joined the team in 1980 and was the NBA Rookie of the Year. With Robert Parish and Kevin McHale, he led the Celtics to ten Atlantic Division Crowns and three NBA titles. The league's MVP three seasons in a row, Bird's shooting prowess and brilliant defense drew crowds across the country, and helped rekindle enthusiasm for professional basketball. In 1996, he was named one of the 50 greatest players in NBA history. 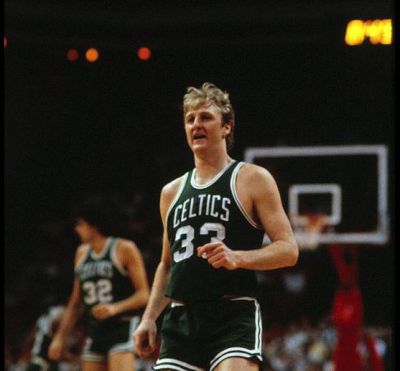 On a cold Thursday night in February 1993, the Boston Celtics raised No. 33 to the rafters of the Boston Garden, as the team retired Larry Bird's number. Drafted by Boston out of Indiana State in 1979, Larry Bird played his entire 13-year professional career for the Celtics.

While many people at first thought Bird was not fast enough to play in the NBA, he soon emerged as a superb all-around player with an uncanny instinct for the game. He was a singular player capable of thrilling performances – impossible reverse lay-ups, miraculous 35-footers over multiple defenders.

He won the NBA Rookie of the Year Award in 1980 and was the league's Most Valuable Player three seasons in a row, matching a record held only by the legendary Bill Russell and Wilt Chamberlain.

Bird also entered the record books with his scoring, passing, and rebounding. His competitive finesse, behind-the-back passes, and shooting prowess made him one of the dominant players in the game. He sparked a dramatic turnaround in the fortunes of the struggling Boston Celtics.

With a winking leprechaun as its logo, "The Team in Green," has a storied history that goes back to the founding of the National Basketball Association in 1946. The first owner was Walter Brown, who already owned the Boston Garden and was President of the Boston Bruins hockey team.

He was a singular player capable of thrilling performances

Auerbach guided the team to an unprecedented nine NBA championships, including a record eight straight from 1959-1966. The Celtics have won the championships 17 times, more than any other team.

Auerbach retired in 1966, and Bill Russell assumed the role of player-coach. The Celtics won two more World Championships during his three years in the job, but the aura of invincibility was beginning to fade. The Philadelphia 76ers emerged as the new powerhouse in the Eastern Division.

With the retirement of Russell in 1969, it took the Celtics five years to bring a title back to Boston. Although the team won four more championships over the next decade, things were on the decline. After Havlicek retired in 1978, the Celtics ended the season at the bottom of the Atlantic Division.

There was one bright spot that year, however — a major deal involving a seven-player trade that earned the team the right to draft Larry Bird.

Even in basketball-crazy Indiana, Bird was a sensation. In his hometown of French Lick, which had a population of slightly more than 2,000, as many as 1,600 people attended his high school basketball games. They came to watch the blond-haired shooting whiz named Larry Joe Bird.

Attendance continued to rise, as fans filled not only the Boston Garden but any arena where Bird and his teammates played.

In his rookie season, with Bird as the focal point of a well-rounded squad, the Celtics improved by 32 games, posting a 61-21 record and returning to the top of the Atlantic Division. Bird led the team in scoring, rebounding, steals, and minutes played. He made the NBA All-Star team for the first of 12 times in his career.

In an off-season trade, the Celtics acquired center Robert Parish and sixth man Kevin McHale. A new era was beginning. Building on Bird's momentum, the Celtics beat Philadelphia for the Atlantic Division title in 1980-1981; they went on to the finals, where they beat the Houston Rockets.

It would be another two years before the Celtics made the finals again, but attendance continued to rise, as fans filled not only the Boston Garden but any arena where Bird and his teammates played.

In the 1983-1984 season, Bird was averaging in the mid-20s in points per game and was hitting almost 90% of his free throws. In the NBA finals against the Lakers, Bird scored an average of 27 points per game, with 14 rebounds. The next season he set an all-time Celtics record by scoring a career-high 60 points in a game against Atlanta.

In 1986 Boston won its 16th championship. Larry Bird was showered with accolades. He was named the league's Most Valuable Player for the third season in a row, as well as the final's MVP and the Associated Press Male Athlete of the Year.

The following season, he became the first player ever to shoot at least .500 from the floor and .900 from the free-throw line in the same season; he repeated the feat the next year. He was equally masterful on defense; he continued to outwit faster, more athletic players.

He was equally masterful on defense; he continued to outwit faster, more athletic players.

In 1990, Bird suffered a back injury that would eventually end his playing career. He was still playing well enough to be named to the 1992 U.S. Olympic "Dream Team," which dominated the competition and won the Gold Medal and millions of fans all over the world.

The 1991-1992 season was his last as a player. After working for several years in the Celtics front office, he became head coach of the Indiana Pacers. He led them to the 2000 NBA finals, where they lost to the Celtics' old rivals, the Los Angeles Lakers. After taking a few years off, Bird returned to the Pacers in 2003 to serve as President of Basketball Operations. He was the first person to be awarded the MVP, Coach of the Year, and Executive of the Year honors. In 2012, Bird left the game to enjoy retirement.

The Sports Museum at the TDGarden in Boston.

Basketball legends Larry Bird and Magic Johnson discuss their years of rivalry and friendship on and off the court: www.npr.org.

On this day in 1995, the Bruins played the final game at the Boston Garden. For almost 70 years, the cavernous building served as the city's main sports arena and exhibition hall. Here the Celtics...