The 125th anniversary of the evacuation of Boston, made imperative by the building of fortifications on Dorchester Heights and Nook Hill by Washington's army, was enthusiastically celebrated yesterday in South Boston, the scene of that memorable work of the American army, but throughout the city there was a holiday atmosphere.... It is estimated that 100,000 people witnessed the parade…Twelve hundred men participated in the parade and along the line they were given an ovation.

Never did a visitor to South Boston receive such a reception as was accorded the senior senator when he rose to speak. Senator George Frisbie Hoar said in part,

'The yoke of Great Britain on our father's necks was easy, and her burden was light. Our fathers were a hundred times better off in 1775 than were the men of Kent, the vanguard of liberty in England…They were a thousand times better off than Ireland was far down in living memory. There was more happiness in Middlessex on the Concord than there was in Middlesex on the Thames. But our fathers felt, whatever conditions might exist, they were a people. For that they fought and for that they were willing to die. On the 18th day of March, 1776, republicanism under George Washington, drove imperialism, under Sir William Howe, out of Boston, never to come back. And that is the lesson of this anniversary.

The good news and the bad news

The good was that they evacuated Boston; the bad, that they invaded New York City a few month later and occupied there for years. There was more support for them from Loyalists in New York, than there had been here.
Login

On this day in 1901, the City of Boston officially celebrated Evacuation Day for the first time. In early March of 1776, Continental troops managed to move heavy cannon to the top of Dorchester Heights. When the British realized what had happened, they knew they could no longer hold the capital. The lowly Continental Army forced the British to evacuate Boston. One hundred and twenty-five years later, the Mayor proclaimed March 17th, St. Patrick's Day, a legal holiday. The city could commemorate an important historical event — George Washington's first victory in the American Revolution — and celebrate its place as "the capital of Irish America." For many years, schools and government offices were closed on March 17th in Boston and Suffolk County.

The custom of parades on St. Patrick's Day was well established in Boston by the time the British Army occupied the city in the 1760s. 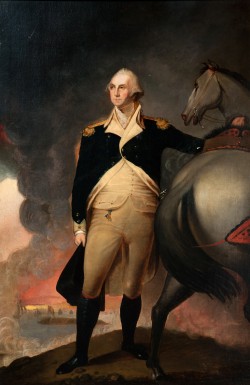 On March 17, 1901, the Mayor of Boston declared a new city holiday. It was the 125th anniversary of the day in 1776 that General George Washington and the fledgling Continental Army forced the British to end their occupation of Boston.

To commemorate the first Evacuation Day, 100,000 special medals were presented to the city's children. Municipal workers had a paid day off and schools were closed. The fact that March 17th also happened to be St. Patrick's Day was not lost on anyone, and in Boston the two holidays have been observed together ever since.

Of course, St. Patrick's Day predated 1776. Long considered the patron saint of Ireland, St. Patrick came to Boston with the earliest Irish immigrants. There is no hard documentation, but according to tradition, the first formal St. Patrick's Day celebration in the New World was held in Boston in 1737.

. . . according to tradition, the first formal St. Patrick's Day celebration in the New World was held in Boston in 1737.

In one version of the story, a group of wealthy Protestant gentlemen and merchants who had recently emigrated from Northern Ireland gathered for a festive dinner on March 17th. In another, a meeting of the recently formed Charitable Irish Society happened to be held in a local tavern on that date; the meeting spilled over into the street and an impromptu procession constituted America's first St. Patrick's Day parade.

The custom of parades on St. Patrick's Day was well established in Boston by the time the British Army occupied the city in the 1760s. Irish soldiers in the British army celebrated St. Patrick's Day with marching, feasting, and dancing. On March 17, 1775, 70 Redcoats, most likely from Irish battalions, paraded through the streets of Boston in regimental form.

If the British would not burn the town, the Americans would allow the Redcoats and their fleet safe passage out of the harbor.

Within a year, things had changed. After the Battle of Lexington and Concord, British troops had retreated to Boston where the Continental Army held them besieged for 11 months. Finally General Knox arrived with 55 captured cannon from Fort Ticonderoga. By mid-March, Washington's troops had positioned the cannon on Dorchester Heights overlooking the city. The British would occupy Boston for only a few more days.

Generals Howe and Washington reached an agreement. If the British would not burn the town, the Americans would allow the Redcoats and their fleet safe passage out of the harbor. On March 17, 1776, with Continental soldiers watching from Dorchester Heights, the British Army and 1,100 Loyalist civilians boarded ships and sailed for Nova Scotia.

Forcing the hated British Army out of Boston was Washington's first victory and a much-needed boost for American morale.

Washington was well aware that the liberation of Boston occurred on St. Patrick's Day. A number of the men on his command staff were of Irish descent. The General Orders he issued that day specified that anyone wishing to pass through Continental lines would give the password "Boston," to which the reply would be "St. Patrick." It is said that as the British troops departed, an American band played "St. Patrick's Day in the Morning."

Forcing the hated British Army out of Boston was Washington's first victory and a much-needed boost for American morale. As the 100th anniversary neared, an effort was made to recognize the significance of the event. But it was not until 1901 that Evacuation Day became a holiday in Boston. The next year, on March 17th, the city dedicated the Dorchester Heights monument. Located in predominantly Irish South Boston, Dorchester Heights has been the scene of St. Patrick's Day celebrations ever since.

The Dorchester Heights Memorial is locacted on G Street in South Boston.

The Wearing of the Green: A History of St. Patrick's Day, by Mike Cronin and Daryl Adair (Routledge, 2001).

"In St. Patrick's Shadow: The Peculiar Holiday of Evacuation Day," by Andrew Simpson in The Newsletter of the Boston Historical Society and Museum, 2004, Issue 1.