"... the 20th of this Instant March will be a Day memorable for the most terrible Fire that has happened in this Town, or perhaps in any other Part of North-America, far exceeding that of Octo. 2, 1711, now termed the great Fire. It began about Two o'clock in the Morning in the Dwelling-House of Mrs. Mary Jackson and Son at the Brazen-head in Cornhill, but the Accident which occasioned it is uncertain... [T]he flames in their Progress consumed near 400 Dwelling-Houses, Stores, Shops, Shipping, &c. together with Goods and Merchandizes of almost every kind, to an incredible Value; -- but it is not easy to describe the Terrors of that fatal Morning, in which the Imagination of the most calm and steady, received Impressions that will not easily be effaced: At the first Appearance of the Fire there was little Wind but this Calm was soon followed with a smart Gale from the North-West, then was beheld a perfect Torrent of Fire bearing down all before it, in a seeming Instant, all was Flame -- and in that Part of the Town where was a Magazine of Powder -- The Alarm was great and an Explosion soon followed, which was heard and felt to a very great Distance; the Effect might have been terrible, had not the chief Part been removed by some hardy Adventurers, just before the Explosion; at the same Time Cinders and Flakes of Fire were seen flying over that Quarter where was reposited the Remainder of the Artillery Stores and Combustibles, which were happily preserv'd from taking Fire.

The People in this and neighbouring Towns exerted themselves to an uncommon Degree, and were encouraged by the Presence and Example of the greatest Personages among us, but the haughty Flames triumphed over our Engines, -- our Art, -- and our Numbers. The distressed Inhabitants of those Buildings now wrapped in Fire, scarce knew where to take Refuge from the devouring Flames; Numbers who were confined to Beds of Sickness and Pain, as well as the Aged and Infant, then demanded a compassionate Attention; they were removed from House to House, and even the dying were obliged to take one more Remove before the final one.

The loss of interest cannot as yet be ascertained, or who have sustained the greatest, it is said that the Damage which only one Gentleman has received, cannot be made good with £5000 Sterling; it is in general too great to be made up in any Measure by the other Inhabitants, exhausted as we have been by the great Proportion this Town has borne of the extraordinary Expense of the War; and by demand upon our Charity to relieve a Number of Sufferers by a Fire not many Months past, a partial Relief can only now be afforded to these miserable Sufferers, and without the compassionate Assistance of our Christian Friends abroad, distress and ruin may quite overwhelm the greatest Part of them; and this once flourishing Metropolis must long remain under its present Desolation.

In the midst of our Distress, we have great cause of Thankfulness, that notwithstanding the continuance and rage of the Fire, the Explosion at the South Battery, and the falling of the Walls and Chimnies, Divine Providence has so Mercifully ordered it, that not one Life has been lost, and only a few wounded..."

On this day in 1760, the dreaded cry of "Fire!" roused sleeping Bostonians. Over the next ten hours, the worst fire to strike a colonial American city ravaged the capital of Massachusetts. Beginning in a tavern near the central market, the wind-whipped blaze spread quickly. The flames consumed shops and homes along King and Congress Streets and continued down to the wharves, where ten ships were left in ashes. Faced with staggering losses, Boston sought aid from the King and Parliament. While other colonies took up charitable collections for the city, the British government refused to help. Some historians have suggested that the Crown's indifference to Bostonians' plight after the Great Fire of 1760 was an early spur to the spirit of rebellion.

In 1851 Boston pioneered the world's first telegraph fire alarm system, with red alarm boxes spread throughout the city that connected citizens to the nearest fire house with the turn of a crank. 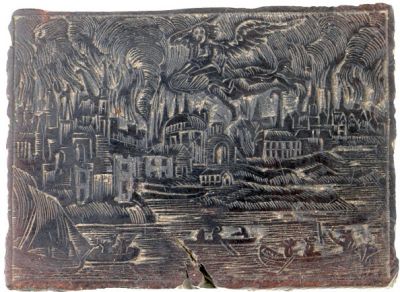 No one knows what started the fire of 1760. Open fires were part of everyday life in colonial Boston; embers from a banked fireplace, an untended candle, or a chimney that had lost its clay coating caused frequent conflagrations. Flames spread rapidly, with winds off the ocean driving fires across wood-shingled roofs that quickly consumed cedar-clad houses, sheds, warehouses, and wharves. Fire was a constant hazard in all colonial cities, but Boston's location on a densely packed peninsula in a windy harbor meant that it had more blazes than any other colonial metropolis.

Major fires reshaped Boston repeatedly in the seventeenth century. A visitor noted in the 1680s that Boston was liable to fire "as has already happened several times; and the wonder to me is that the whole city has not been burnt down, so light and dry are the materials." Between the first major fire in 1653 and a huge blaze in 1711 that destroyed much of the center of town — including the Old Meeting House and the Boston Town House — there were at least seven other great conflagrations. Like many of the early fires, the 1711 blaze destroyed blocks of the town center around the Cornhill Market and commercial district. With over 100 buildings lost, Puritan preacher Increase Mather took to his pulpit and proclaimed that the blaze was God's just punishment for Boston's decline into sinfulness:

"Has not God's Holy Day been profaned in New England? . . . Have not burdens been carried through the streets on the Sabbath Day? Have not bakers, carpenters and other tradesmen been employed in servile works, on the Sabbath Day? When I saw this . . . my heart said, Will not the Lord for this kindle a fire in Boston?"

". . . the wonder to me is that the whole city has not been burnt down, so light and dry are the materials."

While ministers preached repentance, city officials began enacting laws and establishing practices for preventing and responding to fires. Immediately following the first great blaze in 1653, officials decreed that each house be equipped with a ladder to reach the roof, poles with swabs to snuff out sparks, and other tools to fight fires. Boston became an early leader in firefighting regulations; it was later to pass the first fire-related building codes. It also led the way in introducing new firefighting apparatus.

After a grievous fire in 1676, the town decided to invest in a new hand-operated water pump imported from London. The device was a simple wooden box with handles that could be carried to fires. There it was filled with water by a bucket brigade, and when pumped, it shot a stream of water out a flexible hose. To operate the "hand tub fire engine," Boston named 12 men, who would be paid for responding to fires and using the new machine. With this resolution, passed January 27, 1678, Boston became the first town in the nation to have paid fire fighters. As the town added more machines and more "engineers" to operate them, it decided that these firefighters should be trained "under the same discipline as soldiers," and by 1720 Boston had the beginnings of a modern fire department with ten fire wards, six machines, and 20 paid firefighters.

Volunteers also played a major role in fighting Boston's fires. Responding to a fire had always been a civic duty of all men in Boston; when the cry of "fire" or the pealing of church bells signaled that flames had been spotted, every household was required to send a man with a leather bucket to help fight the fire. In September of 1718, Boston organized the "Boston Fire Society," the nation's first mutual aid organization. Members pledged to fight fires at each other's homes, rescue their property, and guard against looting.

". . . in spite of all we could do with the engines, &c. it spread a great way down King's Street, and went across and laid all that part of the town in ashes, down to Fort Hill."

Volunteers and members of the Boston Fire Society joined the "engine companies" with their hand-pumped "fire engine" to combat the blaze that broke out in Boston in the early morning of March 20, 1760. But the wind-whipped blaze spread quickly to businesses and homes around the central market area. The flames, which one observer described as "a perfect torrent of fire," leveled shops and homes along King and Congress Streets and continued straight down to the wharves. The fire raged for ten hours. Hundreds of residents fled and "scarce knew where to take Refuge from the devouring flames; Numbers who were confined to Beds of Sickness and Pain, as well as the Aged and Infant . . . were removed from House to House and even the dying were obliged to take one more Remove before their final one."

David Perry, a sailor from Nova Scotia, recorded in his journal: "[W]e were billeted out at the house of a widow, named Mosely; and while we were here the town took fire in the night. It originated in a tavern . . . at about midnight, the wind in the north-west and pretty high; and in spite of all we could do with the engines, &c. it spread a great way down King's Street, and went across and laid all that part of the town in ashes, down to Fort Hill. We attended through the whole, and assisted in carrying water to the engines. The number of buildings burnt was about three hundred."

Perry's estimate was low. Though no life was lost, the fire consumed about 350 homes, shops, and warehouses. The loss of property made it the worst fire to date in the American colonies.

. . . the Massachusetts Charitable Fire Society dedicated itself to "stimulating genius to useful discoveries tending to secure the lives and property of men from destruction by that element."

Boston's fires did not end with independence. Major blazes continued to plague the city. In 1792 the Massachusetts Charitable Fire Society dedicated itself to "stimulating genius to useful discoveries tending to secure the lives and property of men from destruction by that element." Luminaries such as Samuel Adams, Charles Bulfinch, Josiah Quincy, and Paul Revere all turned their energies to inventing ways to prevent or fight fires. The city became a leader in firefighting innovations. In 1851 Boston pioneered the world's first telegraph fire alarm system, with red alarm boxes spread throughout the city that connected citizens to the nearest fire house with the turn of a crank.

Innovations, of course, did not bring an end to Boston's fires. Other famous blazes to enter the history books include the infamous Ursaline Convent Fire of 1834, the Great Fire of 1872, the Cocoanut Grove Nightclub Fire, and the Vendome Hotel Fire in the twentieth century. Boston has responded with innovative building codes, firefighting equipment, and a well-trained fire department. Most of all, the city has demonstrated its resilience: each major blaze has led to rebuilding.

Fire Engines, Firefighters: the Men, Equipment, and Machines, from Colonial Days to the Present, by Paul C. Ditzel (Crown, 1976).

Boston on Fire: A History of Fires and Firefighting in Boston, by Stephanie Schorow (Commonwealth Editions, 2003).