From Garrison's "The American Union," published in the Liberator on January 10, 1845.

Accursed be the American Union, as a stupendous republican imposture!

Accursed be it, as the most frightful despotism, with regard to three millions of people, ever exercised over any portion of the human family!

Accursed be it, as the most subtle and atrocious compromise ever made to gratify power and selfishness!

Accursed be it, as a libel on Democracy, and a bold assault on Christianity!

Accursed be it, as stained with human blood, and supported by human sacrifices!

Accursed be it, for the terrible evils it has inflicted on Africa, by burning her villages, ravaging her coast, and kidnapping her children, at an enormous expense of human life, and for a diabolical purpose!

Accursed be it, for all the crimes it has committed at home - for seeking the utter extermination of the red men of its wildernesses - and for enslaving one-sixth part of its teeming population!

Accursed be it, for its hypocrisy, its falsehood, its impudence, its lust, its cruelty, its oppression!

Accursed be it, as a mighty obstacle in the way of universal freedom and equality!

Accursed be it, from the foundation to the roof, and may there soon not be left one stone upon another, that shall not be thrown down!

Henceforth, the watchword of every uncompromising abolitionist, of every friend of God and liberty, must be, both in a religious and political sense - "NO UNION WITH SLAVEHOLDERS!"

Quoted in William Lloyd Garrison and the Fight against Slavery: Selections from The Liberator, ed. by William E. Cain (St. Martin's Press, 1995).

On this day, New Year's Eve 1862, William Lloyd Garrison, publisher of the abolitionist paper The Liberator, delayed printing the latest edition as he waited for news from Washington. At midnight, his son and daughter joined Black worshipers in hopeful prayer at the AME Church on Beacon Hill. The next day, thousands of abolitionists gathered at the Music Hall and the Tremont Temple in Boston, hoping they would have cause to celebrate. At dusk, the wire finally came from Washington: President Lincoln had signed the Emancipation Proclamation. The crowds erupted in cheers. Garrison described the proclamation as "momentous" and continued publishing The Liberator until December 1865, when the 13th Amendment was ratified and all enslaved African Americans were set free.

Garrison became increasingly radical, a "disunionist" who favored secession by the North; he changed the masthead of The Liberator to read "No Union with Slaveholders." 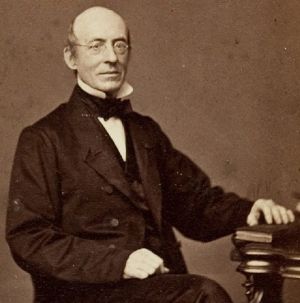 William Lloyd Garrison "moved not with the tide, but against it," said Frederick Douglass at Garrison's memorial service in 1879. Douglass described the Boston abolitionist as "unusually modest and retiring in his disposition; but his zeal was like fire, and his courage like steel. . . . [He was] the man who was then and will ever be regarded as the chief apostle of the immediate and unconditional emancipation of all the slaves in America."

Garrison was born in Newburyport in December 1805. In 1818 he began a printing apprenticeship for the Newburyport Herald. Jobs followed at newspapers in Newburyport, Boston, and Vermont; at each he espoused his strong moral views in favor of temperance. After he met Quaker Benjamin Lundy in 1828, Garrison began to write in opposition to slavery. The following year, he joined Lundy in Baltimore, where they co-edited The Genius of Universal Emancipation, a newspaper devoted to the cause of immediate emancipation.

In 1830 he was back in Boston, planning the first issue of The Liberator. Published on January 1, 1831, "within sight of Bunker Hill and in the birth place of liberty," it set the tone for the 1,819 weekly issues that followed: "I will be as harsh as truth, and as uncompromising as justice," he wrote. "On this subject, I do not wish to think, or speak, or write, with moderation. . . . I am in earnest — I will not equivocate — I will not excuse — I will not retreat a single inch — AND I WILL BE HEARD."

Douglass described the Boston abolitionist as "unusually modest and retiring in his disposition; but his zeal was like fire, and his courage like steel. . . .

Garrison believed that "moral suasion" would convince slaveholders that slavery was the worst of all sins, and that they would then free the men, women, and children they held in bondage. Slavery should be abolished immediately, he insisted. "I know not by what rule of the gospel men are authorized to leave off their sins by a slow process." He rejected both violence and political action. The latter, Garrison insisted, involved unacceptable moral compromise.

From the outset, Garrison enjoyed the support of Boston's small but active African American community. Three-quarters of the paper's subscribers were Black. The Liberator served not only as the voice for immediate emancipation but as the newspaper for Boston's Black community. Birth, marriage, and death announcements appeared in its pages, as did notices for lectures and meetings at the African Meeting House, advertisements for boardinghouses, apprenticeships, and more. The paper covered in detail such pivotal issues as the long battle to integrate Boston schools, the repeal of the Massachusetts law against interracial marriage, and the abolition of "Jim Crow" cars on trains and other segregationist practices.

The majority of the white population, however, regarded Garrison and the Liberator as fanatical and exceedingly dangerous. In the South, mobs broke into post offices and burned issues of the paper awaiting delivery to subscribers. Georgia's was one of several legislatures that offered a substantial award for anyone who would deliver Garrison to the state, where he would be charged with "inciting slaves to rebellion."

The Liberator served not only as the voice for immediate emancipation but as the newspaper for Boston's Black community.

Northerners were not much friendlier to Garrison and his views. The New England textile industry depended on cotton produced by slave labor. A northern businessman explained it to the abolitionist minister Samuel May, "We cannot afford, sir, to let you and your associates succeed in your endeavor to overthrow slavery. It is not a matter of principle with us. It is a matter of business necessity. . . . We mean, sir, to put you abolitionists down, — by fair means if we can, by foul means if we must."

Many abolitionists paid a high price for openly supporting the cause. Professors and others were dismissed from their posts; sons of abolitionists were expelled from colleges and theological seminaries; and women suffered social isolation. Author-editor Lydia Maria Child was one of those who lost her livelihood. Nevertheless, abolitionists continued to spread the word; they gave lectures, held conventions, circulated petitions, distributed pamphlets, wrote to newspapers, published almanacs, and organized fundraising events.

"We cannot afford, sir, to let you and your associates succeed in your endeavor to overthrow slavery. It is not a matter of principle with us. It is a matter of business necessity. . ."

As the movement grew, so did opposition to it. Between 1833 and 1837, mobs attacked a number of anti-slavery meetings. On October 21, 1835, a crowd dragged Garrison from an abolitionist gathering out into the streets of Boston, stripped him to his underwear, and verbally abused him. Among his assailants, Garrison saw "gentlemen of property and standing." One witness, not a sympathizer, noted both the abolitionist's courage and his naiveté: Garrison "kept saying, 'Oh, if they would only hear me five minutes, I am sure I could bring them to reason.' Now, you know that that was ridiculous, for they were all ready to tear him in pieces." The mayor managed to whisk Garrison off to jail for the night, for his protection.

Garrison refused to participate in the political process. He pronounced the United States Constitution "a covenant with death and an agreement with hell." At a July 4th gathering in Framingham, he burned first the Fugitive Slave Act, then the decision to return Anthony Burns to slavery, and finally a copy of the Constitution itself. He became increasingly radical, a "disunionist" who favored secession by the North; he changed the masthead of The Liberator to read "No Union with Slaveholders."

In the 1840s, the abolitionist movement began to splinter over issues such as women's participation in leadership roles, use of violence, political action, and attitudes toward the federal constitution. Whatever their disagreements, however, abolitionists agreed that slavery was a grievous sin and must end immediately. On New Year's Day 1863, the crowd at the Music Hall first cheered President Lincoln for signing the Emancipation Proclamation and then turned their attention to William Lloyd Garrison, sitting in their midst. "Three cheers for Garrison," someone yelled, and the cheers filled the hall, over and over again.

"Massachusetts is a great State," said Frederick Douglass, just a few weeks after Garrison's death on May 24, 1879. "[The state] had done many great things; she has given to our country many scholars, and statesmen, many poets and philosophers, many discoverers and inventors; but no son of hers has won for her a more enduring honor, or for himself a more enduring fame than William Lloyd Garrison. No one of her sons has stamped his convictions in lines so clear, deep and ineffaceable into the very life and future of the Republic."

The files of The Liberator Massachusetts Historical Society: Boston Abolitionists, 1831-1865 Humanities: “The Agitator: William Lloyd Garrison and the Abolitionists”

All On Fire: William Lloyd Garrison and the Aboliton of Slavery, by Henry Mayer (St. Martin's Griffin, 2000).