Though I live two hours from Lowell, when the deal to continue making Prince pasta fell through in the late 1990s I was saddened for all those dedicated workers who lost their jobs, despite the great product they produced. I stopped buying the brand for that reason and never returned. So I was surprised to recently see a remake of their old TV commercial with a grown-up "Anthony" running home on Wednesday. It had the opposite effect on me than Prince intended. No nostalgia; just a reminder of a very sad day for Lowell. Doubtless, some 20-something marketing wunderkind at the company with no memory of the hurt they inflicted must have figured "why not bring back a classic?" Not! New England folks have a long memory. I'm gratified to report I haven't seen that new commercial lately; perhaps the company got the message, or more likely nixed it in the market that made the product a household name. ------------------------- Arthur Motta, Jr.
Login

On this day in 1997, the Borden company announced a tentative deal to save the Prince pasta factory in Lowell. When Borden closed the failing plant, Senator Ted Kennedy remarked that it was "a sad day in Spaghettiville." Prince had been one of Lowell's major employers ever since it moved there from the North End in 1939. To TV viewers, however, the company was forever associated with Boston's "Little Italy." Commercials showed a boy running home through the narrow North End streets, with the tag line "Wednesday is Prince Spaghetti Day." Employees and investors tried to buy the pasta plant. Borden was willing to sell the building but not the Prince name. The deal fell through, and Lowell was Spaghettiville no more.

The company had six manufacturing plants, and the one in Lowell was the biggest pasta mill in the country. Prince sold its products in 38 states. 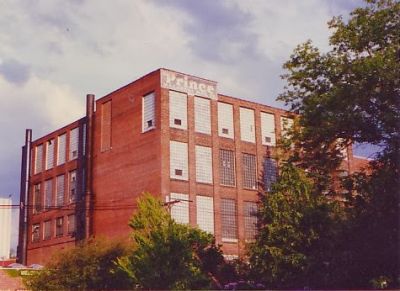 At the turn of the twentieth century, the North End of Boston was fast becoming the city's Little Italy. Twenty-five years earlier, the neighborhood tenements had been full of Irish immigrants; then Jewish families from Eastern Europe had clustered there. But as these groups prospered, they moved to less congested parts of the city. By 1930 over 44,000 Italians were living in an area of less than one square mile; the North End was more densely populated than Calcutta.

Most of the Italian immigrants worked in the neighborhood's markets, bakeries, dressmaker and shoe shops, or as fishermen. In 1912 three Sicilians pooled their resources and opened a small macaroni and spaghetti making business. They named their company for its location — 92 Prince Street. Prince Pasta was so successful that in 1917 the owners constructed a seven-story building on nearby Commercial Street, complete with a railroad track that entered through the back, delivering semolina flour directly to the plant.

Despite the hard times of the Depression, Prince Pasta boomed. Within 20 years, the company had once again outgrown its space. In 1939 the partners moved the operation to Lowell. The next year, another Sicilian immigrant arrived in Massachusetts; he was looking to buy a pasta factory. Thirty-four-year-old Guiseppe Pellegrino was so impressed by Prince's new Lowell facility that he — literally — moved in. He lodged in a room in the plant while working as an assistant to the founders. In a year's time, he had raised enough money to purchase the business.

Prince Pasta was so successful that in 1917 the owners constructed a seven-story building on nearby Commercial Street, complete with a railroad track that entered through the back, delivering semolina flour directly to the plant. 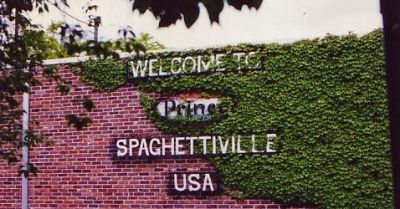 Pellegrino had an extraordinary work ethic, boundless energy, and a knack for publicity. He began an advertising campaign; since spaghetti and macaroni were considered ethnic foods, he focused mostly on Italian newspapers. In the early 1950s, however, Pellegrino decided it was time to introduce non-Italians to pasta products. He hired a Boston advertising firm to produce a radio commercial that would make Prince Pasta a household name. The result was a slogan that stuck: "In the North End of Boston, Wednesday is Prince Spaghetti Day."

That claim, in fact, was fiction. In Italy, pasta was part of almost every meal; in America, most immigrant Italian families cooked pasta dishes on Sundays and had leftovers on Mondays. But as the founder's son later explained, the ad was not aimed at people in the North End. "It was written to get people who didn't already eat much pasta to eat more of it." The ad team figured that Catholic families ate fish on Friday and that Monday was traditionally wash day, so they would simply choose a day in the middle of the week. "It's too late to change it now. It's part of the national consciousness," Joseph Pellegrino, Jr. told a Globe reporter.

"In the North End of Boston, Wednesday is Prince Spaghetti Day."

In 1969 the company scored another commercial success. Twelve-year-old Anthony Martignetti was standing on a North End street corner not far from his family's home when a camera crew approached him. He agreed to be filmed running through the neighborhood's narrow streets and alleyways. When the commercial was released, the refrain of "Anthony!" summoning the boy home for dinner instantly became part of New England's popular culture.

Although it is usually identified with the North End, Prince was in fact based in Lowell for most of its existence. A sign at the city line proclaimed "Welcome to Spaghettiville." The company had six manufacturing plants, and the one in Lowell was the biggest pasta mill in the country. Prince sold its products in 38 states.

Many of the Lowell employees were, like the company's founders, recent immigrants, but rather than Italy, most of them emigrated from Portugal or Laos. Joseph Pellegrino, Jr. was widely regarded as a good employer and a good citizen. Former mayor Brenden Fleming compared him to Aaron Feuerstein, the owner of Malden Mills who saved his workers' jobs after fire ravaged his Lawrence factory. "If the Prince plant had burned down, Pellegrino would have done the same thing," Fleming said.

Many of the Lowell employees were, like the company's founders, recent immigrants, but rather than Italy, most of them emigrated from Portugal or Laos. 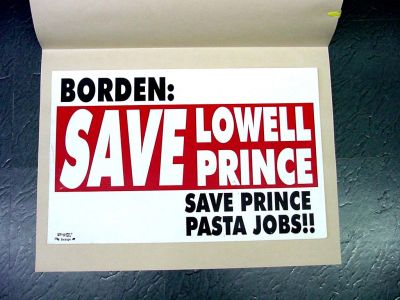 But to the dismay of many in Lowell, in 1987 Pellegrino sold the company to food giant Borden, Inc.. After ten years, a struggling Borden announced plans to close its operations in Lowell. Over 400 employees stood to lose their jobs and Lowell to lose an institution. Protests and petitions asked Borden to sell the plant rather than shut it down. A group of workers, former plant managers, and investors formed a new company, Boston Macaroni, and mounted a bid to purchase the plant.

On July 11th, the Prince Pasta Company ceased production. Five days later, a jubilant city learned that an agreement had been reached for Boston Macaroni to acquire the plant. But the joy was short lived. Borden refused to release rights to the name "Prince Pasta" in addition, Boston Macaroni discovered that the building needed millions in repairs. By autumn, the deal was dead.

One year later, a yarn manufacturing company purchased the plant — a fitting use in a city that played a central role in the development of the nation's textile industry. By 2015, the building had been sold again and purchased for use as a data center. The 1917 Prince building in the North End was converted into condominiums in 1974.