From Mrs. Harriet Richardson of Hadley, Massachusetts, to Clifton Johnson

Monday March 12, 1888
...Not cold, but blowing a gale, and snowing abundantly. Tumultuous enough to be quite joyous and exhilarating.

Tuesday, March 13
The storm soon became so violent that all pleasure in it gave way to dread, and anxiety for the safety of those in our family exposed to its fury... At two in the afternoon, the two milk sleighs, with two horses each attached, came slowly wallowing into the back yard, horses and men completely covered with clinging snow and both well nigh exhausted. Of course all the force of the place was at their service, the men at the barn to care for the horses, sleighs and [milk] cans, the women at the house to remove frozen, snow laden clothing, rub chilled feet and hands, administer hot coffee and dinner, with various other necessary ministrations. They had left town at eleven, and been three hours on their way home, having lost their way and wandered a while in Fort Meadows Swamp.

I was so pleased to find your article on the Great Blizzard of 1888. My paternal grandfather was born 13 March 1888 in Holyoke, Mass and all my life I'd heard that he was a born during the great blizzard but never knew just how great that blizzard was! I am our family's genealogist and have been researching our family history for quite a few years. This new information will be a great addition to the story of Grandpa's life! Is there anyone reading this who knows where I might find more details on how Holyoke survived the storm and perhaps some photos?
Login

On this day in 1888, ordinary life in Massachusetts came to a standstill. One of the most destructive blizzards ever to strike the East Coast raged for 36 hours. Called "the White Hurricane," the storm produced a combination of blinding snow, deep drifts, driving wind, and severe cold. Big cities were especially hard hit. In Springfield, Worcester, and Boston, food supplies soon ran low. So did heat, because most homes were warmed by coal-fired stoves. Coal moved by rail, and trains were not moving. The disruption caused by the storm persuaded city officials to invest in underground utilities and transportation. The Boston subway system, the nation's first, was one positive outcome of the Blizzard of 1888.

One result of the blizzard was the burying of utility wires in downtown Boston and other cities. 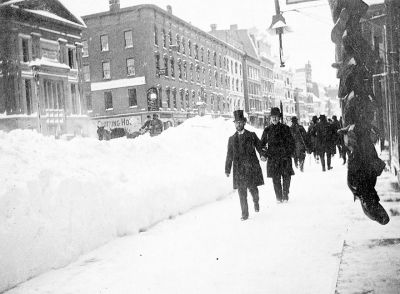 On Sunday, March 11, 1888, the people of Massachusetts were thinking of spring. The weather had been unseasonably warm. Crocuses were up in Boston, and farmers had begun to prepare their fields. The winter had already delivered a news-breaking storm—the great "Schoolhouse" Blizzard that had killed 235 people in Nebraska.

That night a gentle rain began to fall across the state. Early Monday morning, the rain turned to heavy snow. By afternoon whiteout conditions brought life to a standstill in central and western Massachusetts. Moving from west to east, the blizzard reached Boston by nightfall. Monster waves battered the coastline.

As the weather system that spawned the storm stalled off Rhode Island, up to four feet of snow fell on Massachusetts. Howling winds blew it into drifts up to 50 feet high. The snow reached the second floor of many buildings; in some places only chimneys were visible.

With temperatures in the single digits and the wind gusting up to 80 mph, the wind-chill factor was lethal. People who ventured outside became disoriented, or stuck in fast-building drifts; some froze to death. Passengers trapped in stranded railroad cars burned the seats and other wooden components to stave off the cold.

The snow reached the second floor of many buildings; in some places only chimneys were visible.

It would be 90 years before another winter storm eclipsed the region's memory of the Blizzard of 1888. While the earlier storm is often compared to the Blizzard of 1978, the two weather events, separated by nearly a century of technological development, affected the people of Massachusetts in very different ways. In an era of relatively simple technology—few phones, no radio or television—the Blizzard of 1888 brought hardships and challenges that were unknown in 1978.

Rural communities fared better than cities. Although western and central Massachusetts received the heaviest snowfall, farmers were accustomed to supplying their own food and fuel. The greatest hazard they faced was tending to livestock when whiteout conditions and snowdrifts could make even a short walk to the barn deadly.

Men and women with factory jobs were more severely affected. They had no job security; if they failed to make it to work, they were docked a day's pay and risked being fired. People died trying to get to work. In North Adams, a millworker on his way home was found just a short distance from the mill, stuck in a drift on Main Street, frozen to death. The local newspaper reported that the wind was so loud that it drowned out his cries for help.

In North Adams, a millworker on his way home was found just a short distance from the mill, stuck in a drift on Main Street, frozen to death.

Across the state, anyone who needed to travel faced the greatest risk. Men living in the newly developed suburbs took the streetcar to work in the morning, but the trip home was a life-and-death struggle. In 1967, a Boston Globe writer remembered, "I was there in person, a five-year-old. I can recall flattening my nose against the windowpane and wondering whether my father was going to make it. He did. But other dads were found dead in deep drifts by rescue parties."

The fast accumulating snow and drifts immobilized railroad cars. Passengers and crewmen were stranded without food, water, or heat, sometimes for days.

While people enjoyed the interruption in routine caused by the Blizzard of 1978, the isolation imposed by the 1888 storm was the source of great unease. Newspapers relied on the telegraph almost exclusively for distance reporting. With telegraph lines down, the headline "CUT OFF!" appeared on front pages. The telephone, a newer, less common means of communication, was also rendered useless, as most poles snapped under the force of wind and snow. The Boston Globe had one of the city's first telephones, and when "the copper wires of the New England Long Distance Telephone Company refused to be downed," it was one of the few papers able to maintain contact with the outside world. One result of the blizzard was the burying of utility wires in downtown Boston and other cities.

"I can recall flattening my nose against the windowpane and wondering whether my father was going to make it. He did."

Once the storm subsided, the deep snow cover proved a boon to rural travelers. Rather than plowing, farmers worked in teams to pull ox-drawn rollers over the roads. The packed snow created excellent conditions for sleighing and for transporting heavy loads.

Conditions in the cities improved more slowly. Most urban transportation depended on horse-drawn omnibuses and streetcars, which were quickly abandoned in the drifting snow. After the storm, huge drifts made the streets impassable. Snowplows drawn by teams of horses had recently been introduced, but there was so much snow that when it was cleared from main streets, it blocked the side streets and sidewalks. Big cities such as Boston and New York organized men to shovel snow and cart it out into the country.

Perhaps the most important legacy of the Blizzard of 1888 was the Boston subway system. Alarmed by the paralysis and economic damage the storm caused, Boston decided to build a subway. The city began laying tracks in 1895. The country's first subway system opened to passengers on September 1, 1897.

"Weather Almanac: Moving the Snow," in The Weather Doctor, by Keith C. Heidorn, 1999.

On this day in 1804, a "snow hurricane" struck Massachusetts. The storm began with winds so powerful that whole forests were leveled. Houses, barns, chimneys, and church steeples came crashing down. Even when the wind...