MIXED REVIEWS FROM AROUND LEAGUE

ATLANTA - The football cognoscenti gathered for Sunday's Super Bowl took a break from dissecting the Rams and Titans yesterday to take in perhaps the final chapter of the Bill Parcells-Robert Kraft-Bill Belichick soap opera.

The deal drew mixed reviews, with some saying the price of a No. 1 draft pick for Belichick was too high . . .

Roger Craig, former 49ers running back: "I think it's great for him. He's where he wanted to be. I think he'll be a great coach. It's tough to be where your heart doesn't want to be. I think the Jets should have released him. They should have just let him go. You shouldn't be tied to something you don't want to do in life."

Randy Cross, former 49ers offensive lineman: "It's awful early in the year to say that it would be the worst-kept secret. From the beginning, I thought he was going to be with the Patriots. It got convoluted, stretched out, prolonged. If this were a seesaw, I'd be straight up in the air right now. I guess I'm different than most - I think Bill Belichick is a heck of a football coach. I think he learned a lot from his Cleveland experience. Let's face it, they've got some great talent [in New England]. I think he's going to give them an edge, an attitude they haven't had."

On this day in 2000, Bill Belichick was named head coach of the New England Patriots. Belichick had already earned a reputation as a brilliant defensive strategist in his years with the Giants and the Jets. In his second season with the Patriots, Belichick made a controversial move, replacing starting quarterback Drew Bledsoe with the unknown backup, Tom Brady. Belichick's "one-die-all-die" philosophy, which emphasizes teamwork over individual star players, helped the team win a series of come-from-behind playoff games. Perhaps the most thrilling was the last game ever played in Foxboro Stadium when the Patriots scored a field goal in overtime to beat the Oakland Raiders. Under Belichick's leadership, the team continued its exciting play in multiple playoff and Super Bowl games.

When the 2001 New England Patriots' championship video was released, it sold over 600,000 copies, more than doubling the record total of the previous sports top seller. 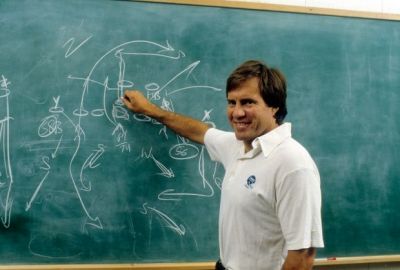 Bill Belichick is the 14th head coach in the history of the New England Patriots. Known as a mediocre player with a good mind during his college days, he began his NFL career with the Baltimore Colts. During his 11-year stint as the defensive coordinator for the New York Giants under Bill Parcells, Belichick earned a reputation as a great strategist. In 1991, he was hired by the Cleveland Browns; at age 37, he became the youngest head coach in the NFL.

The Browns made the playoffs only once in the next five years, and in 1995 Belichick was fired. After a year as an assistant coach for the Patriots, he was working for Parcells again, this time on the coaching staff of the New York Jets. He was in his second year with the Jets when he was offered the top job with the Patriots. After decades as underachievers, Belichick's Patriots have come into their own as one of the great teams in football history.

In 1959, Boston businessman Billy Sullivan Jr. had helped organize a new professional football league — the American Football League — and bought the final franchise for Boston. 1960 was the AFL's inaugural season.

The team's name was chosen in a public contest, with citizens submitting suggestions to local sports writers. The logo was adopted from a drawing done by Boston Globe artist Phil Bissel of a revolutionary hero, "Pat Patriot," crouched over a football in the classic three-point stance, wearing a blue tri-corner hat with red streaks.

In 1991, he was hired by the Cleveland Browns; at age 37, he became the youngest head coach in the NFL.

In the first AFL exhibition game on July 30, 1960, the Patriots defeated the Buffalo Bills 28-7. The first points in league history were scored by Patriots' defensive end Bob Lee, who recovered a fumble in the end zone for a touchdown.

For the first ten years, the Patriots had no home field. They played at Boston University's Nickerson Field, and then for a season at Harvard, which made only one dressing room available.That went to the visiting team, while the Patriots dressed at a nearby motel. For five seasons the team played at Fenway Park.

In 1963, the Pats won their first division championship but lost the playoff game to the San Diego Chargers. It would be another 13 years before the Patriots made it into the post-season again. They had winning seasons in 1976-1978, a number of high profile players emerged, and the legendary lineman John Hannah was the first member of the team inducted into the Pro Football Hall of Fame.

In 1985 the Patriots won a wild card berth in the playoffs. Superb defensive play took them, against the odds, to Super Bowl XX, where they were trounced by the Chicago Bears, 46-10. Eleven years would pass before the Patriots went to another Super Bowl.

Ownership of the team changed twice; renamed the New England Patriots, in 1971 the team finally moved into its own stadium in Foxboro, MA. When the new stadium was named Shaefer Stadium after the Shaefer Brewing Co., it marked the first naming rights agreement in U.S. sports history. In 1988 Bob Kraft bought the stadium, changed its name to Foxboro, and in 1991, replaced the artificial turf with real grass.

It was in the second game of the 2001 season that an injury sidelined star quarterback Drew Bledsoe. Tom Brady, a relative unknown in his second year with the team, replaced him.

The early 1990s were a bleak time for the team, which won only nine games in three seasons. There were rumors of a move to St. Louis. Things began to change in 1993, when Bill Parcells, who had led the Giants to two Super Bowl championships, was hired. The Patriots had the first pick in the NFL draft that year and selected Drew Bledsoe, an All-American quarterback from Washington State. In 1994 stadium owner Robert Kraft bought the team. Two years later, the Patriots went to the playoffs as a wild card; they won the division title but lost to the Green Bay Packers in Super Bowl XXXI.

Parcells left to coach the Jets. After three years with Pete Carroll as head coach, the team brought Bill Belichick from New York and put him in charge. It was in the second game of the 2001 season that an injury sidelined star quarterback Drew Bledsoe. Tom Brady, a relative unknown in his second year with the team, replaced him. Even when Bledsoe recovered, Belichick kept Brady in the first string position. Brady's temperament, skill, and luck helped the 2001 Patriots become one of the League's best teams. They seemed to find a way to win almost every game.

The Patriots were considered underdogs in Super Bowl XXXVI, but they beat the St. Louis Rams on a kick by Vinateri in the final seconds of the heart-stopping game.

The 2001 AFC Divisional Championship against the Oakland Raiders was the last game played in the old Foxboro Stadium. With four inches of snow on the field and 1:48 left on the clock, the Pats were trailing 13-10. Adam Vinateri kicked a 47-yard field goal to tie the game and another in overtime for the win. The Patriots were considered underdogs in Super Bowl XXXVI, but they beat the St. Louis Rams on a kick by Vinateri in the final seconds of the heart-stopping game. When the 2001 New England Patriots' championship video was released, it sold over 600,000 copies, more than doubling the record total of the previous sports top seller. New England started the 2002 season in the new, state-of-the-art Gillette Stadium. The team did not make the playoffs that year, and 2003 started with injuries and losses. Belichick stuck with his "all for one" coaching philosophy, and the team won 15 games in a row. The climax of the season came with victory over the Carolina Panthers in Super Bowl XXXVIII, one of the most exciting Super Bowls ever played. In 2005, before a television audience of 800,000,000, the team beat the Philadelphia Eagles for its its third Super Bowl victory in four years. Bill Belichick moved ahead of the legendary Vince Lombardi with a playoff record of 10-1.

The Patriots made two less successful Super Bowl appearances in 2008 and 2012, both times losing to the New York Giants by the slim margins of 17-14 and 21-17. In 2015, the Patriots brought a Super Bowl victory back to Massachusetts after beating the Seattle Seahawks 28-24. Their victory parade through the streets of Boston in the midst of the city's historic season of winter storms was a bright spot in an otherwise bleak winter.

Opened by the Kraft family in 2008, The Hall at Patriot Place presents team history through a variety of interactive activities and multimedia presentations .