Jefferson was a great favorite with the people of Cheshire, and to show their regard to him, and their approval of his policy, they made for him a mammoth cheese, which was sent to Washington, and there January 1, 1802, presented to him, by Rev. John Leland, as a New Years gift.

The mode of its manufacture was the following: On a given day, the dairy women of the down sent their curds to one place; but the quantity thus collected was too great to be pressed at once, even in a cider mill, so that three additional cheeses were made, weighing seventy pounds each. The big cheese weighed 1,450 pounds."

A great article, as usual, but I have a couple of quibbles with the facts. For one thing, the mention of Berkshire and Franklin Counties. There was no Franklin County in 1801. Franklin and Hampden Counties were established in 1811 out of Hampshire County. "Berkshire and Hampshire Counties" would have been a lot better, since Western Massachusetts consisted of those two counties at that time. Second, the town of Otis was so named in 1810, which is a little late for it to have been named after James Otis. I don't remember the source, but I once read a story to the effect that it was named after a state senator named Otis, from whom the town's representative wanted a favor.
Some factual quibbles

The Town of Otis was incorporated in 1810 and "named after Harrison Gray Otis, an influential lawyer, financier, and politician in revolutionary Massachusetts." The foregoing was obtained from Wikipedia.
Some factual quibbles

That would be totally consistent, since, again according to Wikipedia, Harrison Gray Otis was president of the State Senate from 1808 to 1811. According to the book "Historical Data Relating to Counties, Cities and Towns in Massachusetts," published by the Secretary of the Commonwealth in 1975, the town was incorporated as Loudon in 1773 and renamed Otis in 1810.
How was it transported?

How was the cheese ball transported? I would imagine they transported it by water as much as possible but at least part of the route would have to have been by land. Roads then especially in farming country where mostly narrow and dirt covered, there where few if any paved roads except in cities. This must have been a major undertaking.
Login

On this day in 1801, the Berkshire County town of Cheshire made a 1235-pound ball of cheese and shipped it to Washington, D.C. as a gift for the newly-elected President, Thomas Jefferson, who was a popular figure in western Massachusetts. When news of the "mammoth cheese" reached the eastern part of the state, it caused consternation. Jefferson had won the presidency by defeating John Adams, Massachusetts' native son. Westerners were more in sympathy with Jefferson's vision of a nation of independent yeoman farmers than they were with the strong central government advocated by Adams and his supporters in the Federalist Party. Cheshire's cheese was a sign of the tensions over ideology, economics, and politics that long divided the state's eastern and western regions.

In the fall of 1801, Cheshire's Baptist minister transported the huge cheese ball to the nation's capital. 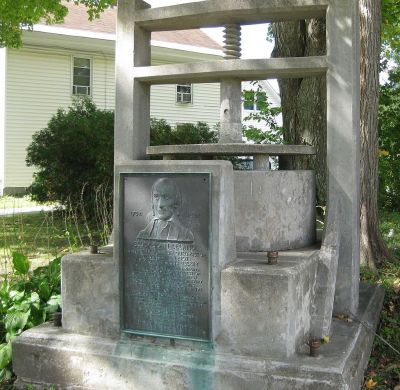 In the 1760s and 1770s, people in eastern and western counties found common ground in their resistance to British oppression. The fiercely independent farmers of the western Massachusetts hill towns agreed with Boston radicals who called upon citizens to protect their right to life, liberty, and property. Indeed, many Berkshire County towns changed their names to honor Boston Patriots, such as Adams, Hancock, and Otis.

But under the stress of wartime, this unity eroded. The war exacted a high price from small farmers. If they took up arms, the families they left behind struggled to make ends meet. High taxes assessed to pay for the cost of the war forced many into debt and some into bankruptcy. Farmers with larger operations could provision the troops, and make a profit, while helping the cause. These larger farms were concentrated in the east and in the Connecticut River Valley. Small farmers believed they bore an inequitable share of the war's costs and resented it. The feeling was especially acute in the western counties.

Most westerners viewed themselves as common farmers and tradesmen; they favored government by ordinary men who would be responsive to popular wishes.

The differences and conflicts between east and west erupted into heated debates as soon as work began on framing a constitution for the new state. The first version, drafted in 1778, proposed property qualifications for state senators and the governor, and gave the right to vote only to men who owned property. Westerners were outraged, and the document was defeated. Although the debate revealed differences in politics and class as well as region, the clearest divide was of vision. Most westerners viewed themselves as common farmers and tradesmen; they favored government by ordinary men who would be responsive to popular wishes. In general, easterners believed in a strong central government that would support trade and fund internal improvements, and they believed that government should be run by the best — that is, the wealthiest and most educated — men acting in the interests of all.

In 1779, when a constitutional convention appointed John Adams to re-draft the document, he knew that he would have to balance conflicting ideals — deference to order and authority against personal rights and liberties — that to a large extent reflected conflicts between the eastern and western parts of the state. In a brilliant synthesis of political thought, Adams's draft protected rights, while establishing a strong and balanced frame of government. Neither east nor west was completely satisfied, but in the end, Adams's compromise succeeded; the state was united under one constitution.

Jefferson might be a wealthy Virginia planter, but he embodied the promise of economic independence for the small farmer.

Not surprisingly, the document did not resolve the regional differences. Pockets of anti-Federalists were scattered across the Commonwealth, but the west was the stronghold of Republicanism. After the Revolution, the government in Boston imposed heavy taxes to pay the state's war debts, and small farmers were hit especially hard. In western Massachusetts, anger turned to open insurrection. In 1787 Daniel Shays and a band of armed farmers tried to shut down the courts to stop foreclosures.

The radical Republicanism of the western counties resurfaced in the bitterly contested election of 1800, which pitted the Federalist John Adams against the Republican Thomas Jefferson. Never mind that Adams was a Massachusetts man through and through. To people in the western part of the state, he was the incarnation of the eastern elite they so resented. Jefferson might be a wealthy Virginia planter, but he embodied the promise of economic independence for the small farmer.

In the fall of 1801, Cheshire's Baptist minister transported the huge cheese ball to the nation's capital. On New Year's Day of 1802, he ceremoniously presented it to the president as a gift from the people of Cheshire. The minister and his congregation believed that Jefferson's vision of limited government would be their salvation. A native son had been defeated, but the voters of Cheshire viewed the election as a victory.

A replica of a giant cheese press is located in Cheshire's Leland Park, near the corner of Church and School Streets, to commemorate the "Mammoth Cheese."