High costs and a changing mode of living were the two major factors in sealing the doom of the Adams operation, [Berkshire Hathaway President Seabury] Stanton said. He explained that there has been a marked shrinkage in the use of the type of goods made at the Adams mill, which he described as always having been "a high cost mill."

"The demand for the goods made at Adams has slumped substantially," he said, "because those goods do not lend themselves to the wash-and-wear finishes wanted by our housewives. They simply will not buy fabrics that they cannot throw into their automatic washing machines. The trend is away from the sheer goods made at Adams, and there never will be a return to the old demand'"

The Adams story indicates the first textile mill opened in 1814 with 700+ spindles and 26 looms....but were these power looms? This is of course right around the time when Francis Cabot Lowell famously installed power looms in his first mill in Waltham. ------------------------- James F. Beauchesne Visitor Services Supervisor Lawrence Heritage State Park
Power looms in 1814?

Presumably, the looms were WATER powered. Whether they were INTEGRATED factories, as the ones in Waltham and Lowell were, is an interesting question.
Power looms in 1814?

Yes, it is an interesting question. I thought that the Waltham Company had the only effective power looms at that time, relying on the plans which Lowell had "stolen" from the Brits. I would be interested to find the facts here, but I'll speculate that the looms were hand looms in the factory, which had water-powered mules, jennies, frames etc to produce the yarn. Dwight
Berkshire -Hathaway

Yes, Warren Buffet is part of the story, this is a quote from Wikipedia. "In 1962, Warren Buffett began buying stock in Berkshire Hathaway. After some clashes with the Stanton family, he bought up enough shares to change the management and soon controlled the company. Buffett initially maintained Berkshire's core business of textiles, but by 1967, he was expanding into the insurance industry and other investments. Berkshire first ventured into the insurance business with the purchase of National Indemnity Company. In the late 1970s, Berkshire acquired an equity stake in the Government Employees Insurance Company (GEICO), which forms the core of its insurance operations today (and is a major source of capital for Berkshire Hathaway's other investments). In 1985, the last textile operations (Hathaway's historic core) were shut down."
Berkshire -Hathaway

The answer, then, would be no. Warren Buffett did not control Berkshire-Hathaway at the time of the Adams mill closing.
Typos

On this day in 1958, the North Adams Transcript reported that the owners of the Berkshire-Hathaway Company had passed a death sentence on their factory in Adams. The company announced that it was shutting down its operation, after nearly a century of producing cotton textiles in the Berkshire County town. Known locally as Mill Number Four, the plant was the last cotton mill in the state's westernmost county. For the shocked town, it meant the loss of 1,000 jobs and marked the end of a 150-year-long tradition of textile manufacturing. Adams had begun as a struggling farming village and grown into a vibrant mill town; now, like so many other Massachusetts towns that had lost their industry, it had to reinvent itself once again.

The mills prospered even through the 1930s, shielding the people of Adams from the worst of the Great Depression. 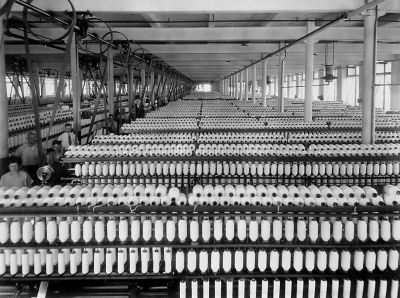 The Berkshire-Hathaway mill was Adams's last link to the town's long industrial history, a history that had shaped lives and livelihoods in northern Berkshire County since before the Civil War.

In 1860, when industrialization was still a relatively recent development, a local writer looked forward to the end of manufacturing in Adams: "The best wish I have for this place is that the anvil and the loom will soon cease their operations and that the grass may grow and flourish the length and breadth of your streets."

He could hardly have imagined that his wish might someday almost come true, and at great cost to the people of Adams. The once-busy local mills are now silent. Visitors to the town come to hike the trail up Mt. Greylock or bike along the beautiful Ashuwillticook Rail Trail that runs past the Hoosic River, once the source of power for local factories.

The closing of the textile mills was not the first time that Adams had to make a new start. Innovation and reinvention are part of the story of this and other many western Massachusetts towns. The land is rocky and hard to cultivate; Native Americans called it Hoosack, meaning "the stony place." The colonists who settled in the area in the 1700s faced a daily struggle to make a living from the land. Between 1810 and 1820, the population began to decline, as young men moved west in search of more fertile soil. Woman's rights pioneer Susan B. Anthony was born on a farm outside of Adams in 1820; by the time she was six, her family had moved to New York State.

The land is rocky and hard to cultivate; Native Americans called it Hoosack, meaning "the stony place."

Adams may have been inhospitable for farming, but thanks to the Hoosic River that runs through town, it was well-suited to industrial development. The first gristmill opened there in 1772; by the early 1800s, the town was home to numerous small industries. When the War of 1812 disrupted the importation of cotton cloth from England, local businessmen saw an opportunity. In 1814 the Adams South Village Cotton Manufacture Company opened its doors, marking the beginning of textile manufacturing in the town. With its 708 spindles and 26 looms, the company's three-story brick mill was a sensation.

Other textile factories followed, giving the town "a name and a pulse" in the early 1800s. Like towns all over the Berkshires, Adams became a "tiny spindledom" — an instant city with much in common with boom towns on the western frontier. Textile finishing was the major industry, but local mills turned out a variety of products — shoes, machinery, rugs, brushes, boxes, iron, brass and aluminum castings, and, later, electrical goods.

The prospect of good wages, independence, even adventure drew many young people off the farms where they had been raised. New mills opened, and between 1820 and 1835, Adams's population grew from less than 2,000 to over 4,000.

Like towns all over the Berkshires, Adams became a "tiny spindledom" — an instant city with much in common with boom towns on the western frontier.

The arrival of the railroad and the construction of a tunnel through nearby Hoosac Mountain in the 1870s opened up a gateway to upstate New York and the Western Reserve. By 1878 Adams was big enough to split in two, and the town of North Adams was incorporated.

Both towns thrived. Berkshire-Hathaway began operations in Adams in 1889 as The Berkshire Cotton Manufacturing Company. Two sons of textile pioneer and mill owner W.B. Plunkett followed in their father's footsteps, building a state-of-the-art cotton mill on the same site where their father had begun to manufacture textiles in the 1830s. The brothers opened three more mills between 1890 and 1900. In 1929 the Plunketts' enterprise was considered "the largest fine goods mill in New England."

The mills prospered even through the 1930s, shielding the people of Adams from the worst of the Great Depression. Business boomed during World War II, but the end of the war brought a new, more stringent economy to Adams and other western Massachusetts towns. Even as wages in Massachusetts declined until they were below the national average, it was not enough to save factory jobs. In search of cheaper labor and weaker unions, factory owners moved shoe and textile production first to the South and in time overseas.

The people of Adams responded to the Berkshire-Hathaway closing with "shock, bitterness and determination to find new industry for this area."

The closing of the Berkshire-Hathaway mill in Adams was a small but painful step in the process of de-industrialization that transformed the Massachusetts economy from an industrial powerhouse to one based on the service sector. In 1950 the state had 264,000 people employed in textile and shoe manufacturing; by 1979 the number had dropped to less than 60,000. Electronics plants in nearby North Adams and Pittsfield helped keep Adams afloat until they, too, began to downsize and then close throughout the 1970s and into the mid-1980s.

The people of Adams responded to the Berkshire-Hathaway closing with "shock, bitterness and determination to find new industry for this area." More than 40 years later, the town is still trying to reinvent itself and its economy. Some nearby towns — perhaps none more successfully than North Adams, which converted an enormous empty factory complex into the Massachusetts Museum of Contemporary Art — have rebuilt their economies around the tourists who flock to the area's cultural and natural attractions. But the revival of Adams is proceeding on a smaller scale. A local quarry produces pulverized limestone for use by gardeners. The old Mill Number Four now houses businesses and luxury apartments; photographs of mill workers line the carpeted hallways.

On this day in 1874, workers in the small western Massachusetts town of Florida finished the Hoosac Tunnel, bringing to completion one of the world's most ambitious engineering projects. The Hoosac Mountain Range had long...