Mr. King, of the well known firm of King & Allen, Aeronauts, has furnished us with the following account of his recent trip in company with Mr. Black, which is attracting so much interest in scientific circles at the present time:

MESSRS EDITORS: . . . on Saturday last, --the prospects of a fair day being very flattering, --Mr. Black, the eminent photographic artist of the firm of Black and Batchelder, and I . . . ascended together. First of all, we arose 1200 feet — by means of a stout rope attached to a windlass — and while remaining stationary at this height, succeeded in getting some fine views of different parts of Boston.

But we wished to get more extended views than could be obtained at such a height, and so after being drawn down, and detaching the rope, we ascended in the usual manner. Soon an expansive field was opened to us, and we hoped to be able to secure some of the magnificent scenes which now we scanned. Everything was in readiness, and an attempt was made to take the city that was now sitting so beautifully for her picture.

But just at this time we encountered a difficulty which had never before suggested itself. The gas, expanding as the balloon rose, . . . filled the surrounding atmosphere, penetrating even into the camera, neutralizing the effect of the light, and turning the coating on the glass plate to a uniform dark brown color. Several plates were spoiled in this manned before we discovered the cause; by which we lost much very precious time, as we were rapidly drifting away in a southerly direction. Soon after, the balloon reached an altitude above the clouds — which were already quite numerous and gathering fast. For some moments we lost sight of the city and the surroundings, and when we again descended below the mist, our distance from Boston was too great to make it worth while trying to get any more views of that locality….

Finding it impossible to carry our experiments any farther, the apparatus was secured, the tent dropped, and the balance of the voyage was devoted to pleasure.

The scenery was truly magnificent. On our left lay the Atlantic, stretching far away to an immense distance until it was finally lost in the clouds. Cape Cod was distinctly seen, though it looked like but a curved strip of sandy beach. . . . Boston and all the adjacent towns were still plainly visible; innumerable villages were seen sprinkled over the landscape; bays, lakes and rivers showed their silvery faces, and the forests, with their gorgeous autumnal garb, revealed beauties which added greatly to the effect of the scene….

The view we succeeded in taking can be seen at Black & Batchelder's rooms, 174 Washington street.

Neither Mr. Allen or I have ever had any faith in the wild propositions that have heretofore been advanced, and it is certainly a settled fact that the balloon of the present day, no matter what its size, can never be used to navigate with any greater precision than has been done already. The worse than fool hardy scheme of crossing the Atlantic is another overreach of these visionaries, and can never be accomplished while the laws of nature remain the same. . . .

On this day in 1860, Boston newspapers carried an advertisement for an extraordinary event: photographer James Wallace Black would photograph Boston from a hot-air balloon hovering over the city. Black accomplished this well-publicized feat five days later, and the Boston Herald soon printed the nation's first-ever birds' eye view of the earth below. It was the first aerial image taken in the United States, the first aerial image of a city anywhere, and is the oldest aerial image known to survive. While the public marveled, the United States Army was quick to see the military value of Black's stunt. Union photographers in hot air balloons were soon tracking Confederate troop movements, providing the world's first aerial reconnaissance.

James Wallace Black became an authority on the use of the magic lantern, a candlelight-powered predecessor of the slide projector, a machine that is now nearly obsolete. 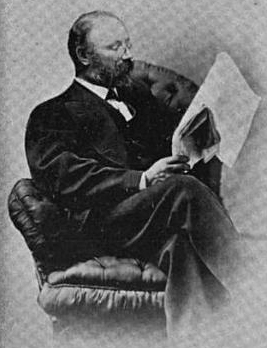 Before the middle of the nineteenth century, aerial views were left to the imagination of artists. Some Renaissance painters had used the principles of perspective to create images of how they believed cities would look from above, but until a "human lofting vehicle" was created, the view from the sky remained a matter of conjecture. When hot air balloons were introduced in the United States in the 1790s, they provided an opportunity to see the world from above, but only for a handful of adventurers.

Because early photography used a process that required the photographic plate to be developed within 20 minutes, photographers could not immediately take advantage of the hot-air balloon. In 1858 a Frenchman put a darkroom and all its gear, including a supply of water, into the basket of a balloon. The photo he managed to produce has been lost, but within two years a Boston photographer repeated the accomplishment.

. . . until a "human lofting vehicle" was created, the view from the sky remained a matter of conjecture. 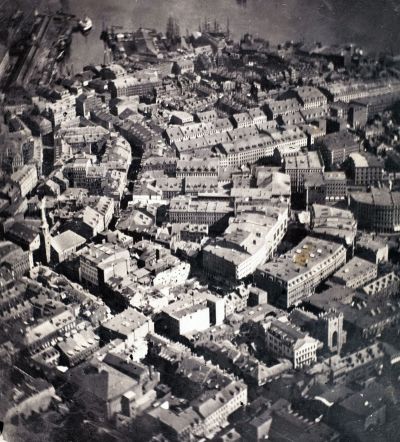 On October 8, 1860, Boston newspapers announced that painter turned photographer James Wallace Black would photograph Boston from a hot-air balloon hovering over the city. On October 13th, a balloon carried Black 1,200 feet over Boston, and he exposed eight plates. The photographer got one good print; he entitled it "Boston as the Eagle and the Wild Goose See It." The Herald printed the image.

In an account written by Samuel King, who supplied the balloon and was with Black when he made his photograph, described the feat. The first images were taken while the balloon was still tethered. Hoping to get an even more spectacular view from higher altitudes, the rope was detached. However, King noted that something unexpected happened at that point: "The gas, expanding as the balloon rose, . . . filled the surrounding atmosphere, penetrating even into the camera, neutralizing the effect of the light, and turning the coating on the glass plate to a uniform dark brown color." Several plates were spoiled and the effort had to be scrapped. Luckily, Black had already captured at least one good image of Boston from above.

The photographer got one good print; he entitled it "Boston as the Eagle and the Wild Goose See It."

With the advent of dry plate photographic techniques and camera improvements, aerial photography became easier. The camera moved from balloon to kite and even pigeon. In 1906 George Lawrence took a now-famous photograph of San Francisco in the aftermath of the earthquake and fire, using "a string of kites to lift a handmade panoramic camera aloft." In 1909 Wilbur Wright took the first photograph from an airplane.

It was not long before the military explored the use of aerial photography to capture images of troop movements and other reconnaissance; photographs taken from hot air balloons are believed to have been taken during the Civil War. As a military tool, aerial photography came into its own during World War I. As photographic and aerospace technology improved, aerial photographs became easier to take and with more detail. In the current era of drone photography and satellite imagery, the view from above has become almost astonishingly ordinary.

As for Boston's James Wallace Black, he became an authority on the use of the magic lantern, a candlelight-powered predecessor of the slide projector, a machine that is itself nearly obsolete. By the late 1870s Black's main business was the production of lantern slides, including a famous series of the Great Boston Fire of 1872.

The Boston Athenaeum and Historic New England's Library and Archives have photographic collections that include the work of James Wallace Black.

Black was buried at Mount Auburn Cemetery in Cambridge/Watertown.

History of Remote Sensing, Aerial Photography Center for the Study of the Drone at Bard College Metropolitan Museum of Art: Catalogue Record

Lighter than Air: An Illustrated History of the Development of Hot-air Balloons, Dirigibles, and Airships, by David Owen (Chartwell Books, 1999).

On this day in 1985, Polaroid won a huge victory in federal court. A judge ruled that Kodak had violated Polaroid's patents for instant photography. The decision ended a nine-year legal struggle between the two...