H.H. Richardson and His Work

Mr. Richardson's Brookline office had a peculiar interest and charm. The building itself was unique. Originally, on removing from New York to Brookline, Mr. Richardson had taken for his work first one room and then a second of the dwelling-house itself; but as more space was needed an addition was made on the south side of the house, immediately adjoining the library, which is still used for office purposes in connection with the added rooms.

The library was Mr. Richardson's sanctum; but it was a sanctum to which he gave hearty welcome to all who worked with him. Dividing lines here were vaguely and dimly drawn. Mr. Richardson's own work was done, now in the library, now in the house, sometimes in one or the other of the large drawing-rooms, or again in one of the alcoves.

The men in the office used respectfully but freely the library, and on occasion invaded the house itself, the old library and even the dining-room with their drawing-boards. The life of the house overflowed continually through the office, bringing always good cheer, and sometimes a sympathy and interest the grace and helpfulness of which are among the happiest, most grateful memories of those who knew them.

Mr. Richardson had removed to Brookline at a time when he was just beginning thoroughly to appreciate and systematically to follow the architectural style which he was to make so peculiarly his own.

Although Richardson's first commission in Springfield no longer stands, two of his early commissions in the city remain: Old North Congregregational Church (now an Hispanic Baptist church) on Salem and Mattoon Streets and the old Superior Courthouse on State Street.
Richardson Library

You are correct. We will make the change. Thank you for pointing this out.
Login

On this day in 1838, Henry Hobson Richardson, one of the true geniuses of American architecture, was born. A native of Louisiana, he received his architectural training in Paris. But the ties he formed during his years at Harvard College, including marriage to a Bostonian, led him to make Boston his home. He designed nearly 80 buildings, including churches, libraries, railroad stations, and private homes, many of them in Massachusetts. His buildings were visually striking and beautifully proportioned. He used forms inspired by early medieval churches, including rounded arches, massive towers, and rugged stone walls, with blocks often laid in bands of contrasting color. Widely copied across the nation, "Richardsonian Romanesque" became the first and only architectural style ever named after an American.

In 1860 he became only the second American ever admitted to the prestigious Ecole des Beaux Arts. After two years, the Civil War reduced his family's circumstances, and he had to withdraw from the Ecole. 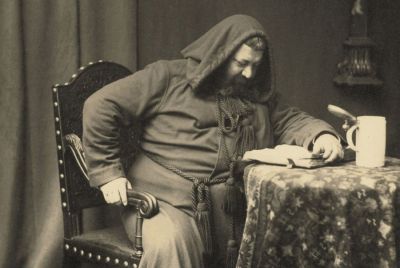 Born to a wealthy Louisiana slave owner, Henry Hobson Richardson exhibited a gift for mathematics and drawing early in life. At 18 he entered Harvard, where his good looks, wealth, athleticism, and charm won him many friends. These social connections would later become the foundation of his Boston-based architectural practice.

By the time he graduated in 1859, he had decided on a career as an architect. His father agreed to send him abroad to study. Richardson had learned French as a boy in Louisiana, and he chose Paris. In 1860 he became only the second American ever admitted to the prestigious Ecole des Beaux Arts. After two years, the Civil War reduced his family's circumstances, and he had to withdraw from the Ecole. He found a job in a Paris architectural firm.

At the end of the war, Richardson returned to the U.S. His family wanted him to come home to Louisiana, but his connections and sympathies were in the North. He married Bostonian Julia Gorham Hayden, to whom he had been engaged since 1859, and set up his first office in New York City.

The nation was emerging from the trauma of war into a period of explosive growth. It needed an architectural style to define its new identity, and H.H. Richardson would soon create one. 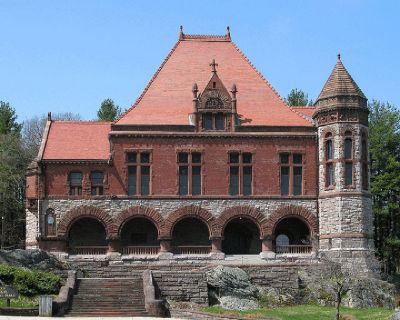 A century after independence, the United States still did not yet have a national architectural style. The colonists had used techniques familiar to them from the Old World. A respect for all things Greek, especially the ideals of Greek democracy, caused the Greek Revival style to spread widely in the early 1800s. It was simple to execute and appealed to a wide range of people in all parts of the country. For several decades, the nation's most important public buildings were almost all built in the Greek Revival style. It also appeared in simple farmhouses, country churches, small town banks, and village halls.

But by the 1840s, a movement toward romanticism in literature, art, and philosophy became increasingly influential. The Greek Revival style had its own associations with romanticism, but now architects and builders wanted even more imagination, whimsy, and ornamentation than classical forms allowed. Also, American industrialists and financiers desired homes that would make clear statements about the wealth and sophistication of their owners.

Architects used foreign conventions to add excitement to their designs. Buildings began to appear with Gothic pointed arches, castle-like turrets, Elizabethan half-timbers, towers topped with Italian loggia, even exotic elements borrowed from India and the Far East. By the time Richardson began his American practice in 1866, the colonial vernacular and Greek Revival were out of fashion, and no national style had emerged to take their place.

Richardson set the style for monumental structures such as state capitals, court houses, university halls, state hospitals, and large commercial buildings in New England and the Midwest; he also left his mark on libraries, schools, trains stations, and suburban residences. 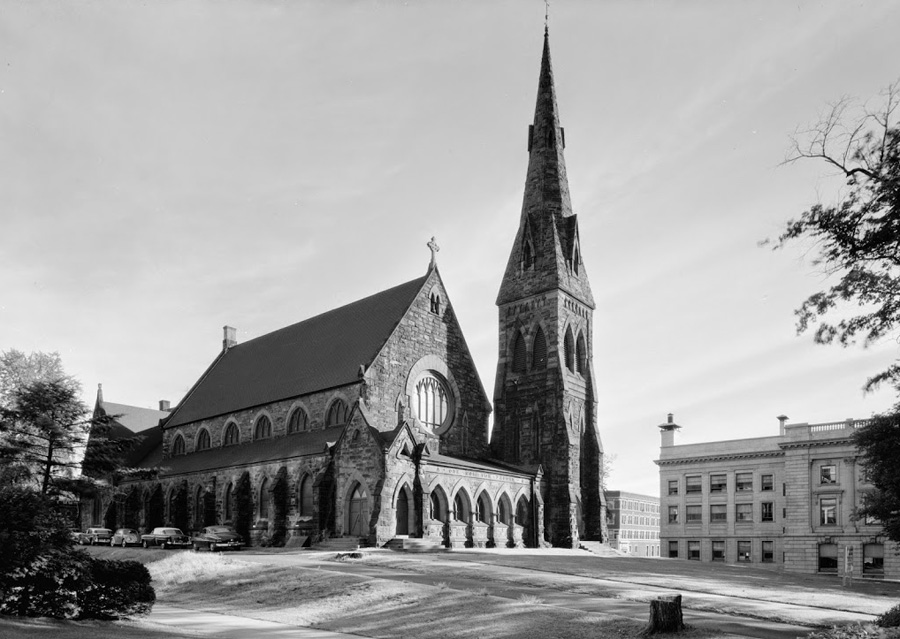 Henry Hobson Richardson would change that. In 1866 he won the commission for the First Unitarian Church in Springfield, Massachusetts. At a time when most churches were being designed in the English Gothic manner, with pointed arches and towers, Richardson chose an original blend of rounded Roman arches of stone, freshly interpreted with varied colors and textures, to create a massive, monumental effect. The project was a success, and other church jobs followed. In 1872 he won what may have been the most important commission of his career —Trinity Church in Boston's Copley Square. With its massive stone walls, supported by dramatic rounded arches and relieved by gables and turrets, and an inventive use of color, Trinity Church is a masterpiece. Richardson's practice grew dramatically.

In 1874 Richardson moved his residence and office to Brookline. He would live and work there for the rest of his life. The 1870s and 1880s were a time of major public building in the U.S. Richardson set the style for monumental structures such as state capitals, court houses, university halls, state hospitals, and large commercial buildings in New England and the Midwest; he also left his mark on libraries, schools, trains stations, and suburban residences. He was a major influence on other architects, most notably his apprentices Charles McKim and Stanford White, who later founded the prestigious firm of McKim, Mead, and White.

One friend described him as "large in everything. . . . His presence filled the mind as it did the eye."

Richardson was a towering figure, physically as well as professionally. One friend described him as "large in everything. . . . His presence filled the mind as it did the eye." His great joie de vivre — he loved wearing bright yellow vests to his many dinner parties — and his unrestrained appetite contributed to the kidney disease that killed him in 1886. He was only 47 years old and at the peak of his architectural career.

When his house went on the market in 2001, his bedroom remained almost entirely unchanged. The pair of rings the 350-pound Richardson used to pull himself up were still fastened to one wall. A group of neighbors organized to save the house, which had deteriorated and was in danger of being demolished. In 2004 Preservation MASS listed the house as one of the ten most endangered historic resources in Massachusetts.

Although he left a widow and six children with almost nothing but debts, few American architects have matched Richardson's artistic legacy. A college friend hardly exaggerated when he described Richardson's death as the "vanishing of a great mountain from the landscape."

Easton, MA has a remarkable collection of Richardson buildings.

Stonehurst, the Robert Treat Paine Estate in Waltham is an impressive country home designed by H. H. Richardson and open to the public.

The Architecture of H.H. Richardson and His Times, by Henry-Russell Hitchcock (M.I.T.Press, 1931).

On this day in 1794, Boston architect Charles Bulfinch obtained a mortgage for the house he had recently designed and built for his family. The 31-year-old Bulfinch had donated so many plans for city churches,...