This "Appeal to a Generous Public" appeared in a Boston newspaper after Bulfinc'hs bankruptcy:

The feelings of our fellow-citizens of this town, are arrested by the recent, and unhappy embarrassments of one of its best supporters. To effect a relief from his present perplexity, should be the first object of this community, which, by his generous and spirited exertions, have been greatly benefited. Could not some methods be devised, which might extricate, from immediate difficulty, that liberal protector, that noble patron of the fine arts? Mr. B. (we all know) has sacrificed the best part of his time, nay, his interest also, in ornamenting and beautifying the town -- and shall he be suffered to remain in this involved situation, without receiving from that town, a helping hand? Since he fails in a public cause, shall he not from the public find redress?"

On this day in 1794, Boston architect Charles Bulfinch obtained a mortgage for the house he had recently designed and built for his family. The 31-year-old Bulfinch had donated so many plans for city churches, monuments, and public buildings that the architect seemed to be single-handedly re-creating his hometown as a place of classical beauty. A bad investment eventually sent Bulfinch to debtors' prison. The city responded by offering him a salary; for the next 20 years Bulfinch served as a city administrator, planner, and master designer. Boston was the beneficiary of the nation's first native-born professional architect. "Bulfinch's Boston" includes the State House, India Wharf, the Otis House Museum, and the Ether Dome at Massachusetts General Hospital.

In 1788 alone, three churches were built to his plans; the next year, he designed the Beacon Monument and the triumphal arch erected for Washington's visit to Boston. 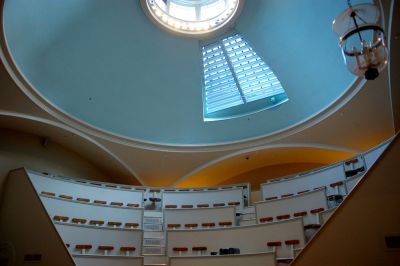 Charles Bulfinch was born into a Boston family of wealth and social position. He attended the Boston Latin School; his schoolboy doodling makes it clear that he was already more interested in art and architecture than history and philosophy. He sketched a Corinthian column inside the cover of his notebook.

A 12-year-old Bulfinch watched the Battle of Bunker Hill from the rooftop of his house, but military life did not appeal to him. In 1778 he entered Harvard, where he had a reputation for being modest, self-effacing, and keenly interested in mathematical projections and perspective. He graduated in 1781.

There was no such thing as an architectural profession in eighteenth-century America. A few well-educated, wealthy amateurs designed their own homes, but most buildings were the work of men who followed, or occasionally adapted, traditional practices. In 1868, MIT opened the first Department of Architecture in the United States, nearly a century after Bullfinch graduated from Harvard.

The experience forced him, as his wife later said, to make "Architecture his business, as it had been his pleasure."

Hungry to know more about architecture, Charles Bulfinch went on a tour of Europe, which was what well-to-do men of his time did when they wished to further their education. From 1785 to 1788, he visited London, Paris, and the great cities of Italy. He was deeply impressed by Neoclassicism, a style that drew on the work of the Italian Renaissance architect Andrea Palladio. Although strongly influenced by Palladio, Bulfinch added graceful curves and decorative elements to the formal balance and symmetry of the Italian's designs and was more flexible in his approach to the use and arrangement of interior spaces. When Bulfinch returned to Boston, he began offering architectural advice to friends and family.

Soon he was designing without charge churches and public monuments around the state. In 1788 alone, three churches were built to his plans; the next year, he designed the Beacon Monument and the triumphal arch erected for Washington's visit to Boston. His work on a theater, hotel, and a dozen private houses incorporated the oval rooms, graceful curving staircases, and elliptical columned porticos that would become hallmarks of his style. The city began to take note.

One of Bulfinch's dreams was to re-create in Boston a row of town houses arranged in the graceful crescent shape that he had admired in European cities. But his timing was bad. He attempted to build the Tontine Crescent during the recession of 1794. The result was bankruptcy and time in debtors' prison. The experience forced him, as his wife later said, to make "Architecture his business, as it had been his pleasure."

Bulfinch turned the Common into a park, laid out plans for Boston Neck and South Boston, and designed an almshouse, a courthouse, a prison, a hospital, churches, schools, and numerous private homes.

He got a helping hand from his fellow Bostonians. Bulfinch had served on the Board of Selectmen since 1791 and had been active in improving city services and government. Recognizing that he was struggling financially, in 1799 a grateful citizenry elected him chairman and granted him a yearly salary.

For the next two decades, Bulfinch was the moving force behind the beautification of Boston. He turned the Common into a park, laid out plans for Boston Neck and South Boston, and designed an almshouse, a courthouse, a prison, a hospital, churches, schools, and numerous private homes. His crowning achievement was the design for the new State House on Beacon Hill, completed in 1798.

In 1817 President James Monroe summoned Bulfinch to complete the design of the nation's capitol. He spent 13 years in Washington before returning home to Boston. He died in 1844 and is buried in Mount Auburn Cemetery at a site marked by an urn that once adorned his beloved Tontine Crescent.

Faneuil Hall is on the Freedom Trail.

On this day in 1846, a crowd gathered in the operating theater at Massachusetts General Hospital. A Boston printer with a tumor on his jaw lay on the table. Curious and skeptical physicians and...

On this day in 1789, George Washington concluded a ten-day presidential visit to Massachusetts. Adoring crowds of grateful citizens greeted him everywhere. People preserved the dishes he used, the chairs he sat on, and the...