The first temptation, one which now affects the draft resistance movement, is to measure actions in the movement by a code of individual conduct. Some refuse to enter the army because no moral man could engage in combat in Vietnam; some disassociate themselves from the Selective Service System because association with the machinery of slaughter is unconscionable; others assume the jeopardy of draft refusal even if they are not subject to the draft because no moral man can let others suffer injustice alone.

In this country such an individual code easily becomes the primary or only standard for political conduct…Equipped only with a standard of individual conduct and a calculus of right and courage we lose sight not only of the many kinds of change needed but also of the motivation for change. So equipped, we easily confine our organizing to the campus. People there are not immediately threatened by the draft. One and only one main force can move them to assume jeopardy in order to protest it: a standard of individual conduct. We feel we must organize the campus.

But all the while men of Charlestown and South Boston and Riverside, of Roxbury and Dorchester and of the working-class parts of cities all over the country are threatened by the draft and are more gently coerced by the security of enlistment….

Our solution must be to begin to organize those most threatened by the US armed forces. How many people gave out information about the October 16 rally in Boston in poor and working-class neighborhoods? Who put up posters speaking the language of those communities? Who tried to counter, thereby, the image the press promotes of us as hippies, cowards, and peace finks? Who suggested in those places that we – not the US Army – speak to people's immediate and long-range interests?

Quoted in The Resistance, by Michael Ferber and Staughton Lynd, (Beacon Press, 1971).

I think you mean 1968. On a positive note however, I have been looking forward to reading Mass Moments every day since a friend introduced me to the feature a few months ago.
Ooops

Though not yet a college student (I would be that Fall), I both followed the trial and engaged in "draft counseling" at the same time. I viewed it as a simple issue of freedom of speech: Were we not allowed to discuss with those facing the draft their views and feelings about it? Their options? And hundreds of others and I participated in a "sanctuary," at Arlington Street Church, during the same Summer months. In "sanctuary" was an AWOL soldier and a draft resister. Both, as result of negotiations with authorities, turned themselves in. The witnessing of the authorities arresting and taking them was solemn, peaceful, silent, and powerfully moving. One was tried, the other not. Out of all that the MA general court -- legislature -- enacted a law prohibiting the drafting of any Massachusetts males for service in Viet Nam. As intended, that law was immediately appealed to the US Supreme Court, the intent being to yet again bring before it the question of the legality of US involvement in Viet Nam. Eight of the justices yet again avoided the question. Justice William O. Douglas, however, wrote several impassioned dissents from denials of certiorari against the hearing of such cases, all quite eloquent. A Chinese curse says, "May you live in interesting times." It was "the best of times, and the worst of times," and it continued to worsen, through the "Saturday Night Massacre" and Nixon's resignation. And now we are back, again, to the Nixon nightmare multiplied. Both resistance and constructive action are necessary to preserve the rule of law and democratic institutions, mostly, as ever, against domestic enemies. ------------------------- A lie is halfway around the world before the truth can get its shoes on. -- Mark Twain
heroes

Don't think that the draft card burners were excused by the government...most got drafted, many refused induction and had to go through lengthy and expensive trials. Some went to Canada and some to jail. The issue caused rifts in families that never healed. It was a terrible time. They were very brave.
Arlo Guthrie's Draft Classification

Hello I had a query about the essay on Arlo Guthrie and his littering conviction. Was he definitely classified as 1A for the Vietnam draft in real life? If so, can anyone source this fact with an exact and scholarly reference? I'm aware that the song 'Alice's Restaurant' is an elaboration of Guthrie's experience but I don't believe I've seen this claim in any other writings I have read. Thank you in advance. ------------------------- H
Login

On this day in 1968, four men were sentenced to federal prison for counseling young men to refuse military service. Dubbed the Boston Five, the defendants included famed baby doctor Benjamin Spock and Yale Chaplain William Sloane Coffin. They had participated in a series of protests at which young men turned in or burned their draft cards to demonstrate their unwillingness to serve in the Vietnam War. Boston's long history of opposing authority when it came into conflict with conscience and its large student population made the city fertile ground for the draft resistance movement. Although the movement in Boston had considerable strength, anti-war activists in general, and draft resisters in particular, faced hostility from people who believed that to defy the government was unpatriotic.

Draft resisters made a distinction between their actions and those of men who left the country or used the system to get a deferment or favored placement that would require another to serve in their place. 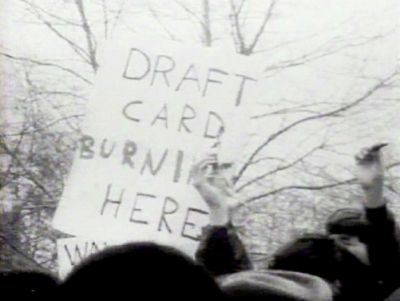 In 1967 American involvement in the undeclared war in Vietnam was growing month by month. There were nearly half a million American troops in Vietnam and the Pentagon was asking for more. In April there were anti-war protests in New York and San Francisco. By the fall, the opposition to the war — and to the military draft that provided men to fight it — had become a fast-growing national movement.

Boston was fertile soil for the movement. The city had a long history of resisting authority, ranging from the Stamp Act to the Fugitive Slave Act. The city was home to an unusual number of liberal Protestant churches that had already organized for social action in support of civil rights. In addition, the high concentration of students meant that the city had a large population likely to engage in protest against the draft and the war it supported.

As historian Michael Foley notes, "the city had become so clearly identified with draft resistance that when the Rolling Stones performed at the Boston Garden Mick Jagger strutted onto the stage in a t-shirt emblazoned with a hand-painted omega symbol, the mark of the Resistance, on his chest." Boston, Foley concludes, "led the way through the movement's most effective period."

One officer commented, "Anyone foolish enough to commit such an unpatriotic gesture in South Boston can only expect what these people got." 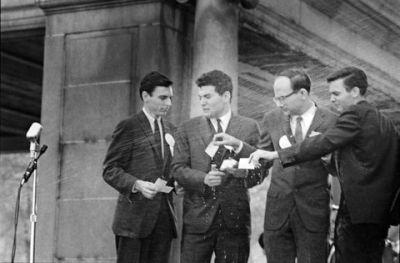 Men who turned in or, in a few cases, burned, their draft cards were making a dramatic statement of their unwillingness to participate in a war they believed to be unjust. They were also breaking the law. The draft resisters were well aware that their actions were a direct challenge to the government. They wanted other people to think about a question they had already answered for themselves: Did American citizens have a right, even a duty, to defy government policies that they regarded as illegal or immoral? Did this justify breaking the law?

Many people believed that it did not. In March of 1966, when four clean-cut resisters in suits and ties burned their draft cards on the steps of South Boston District Court House, a crowd of 250 attacked and beat them, shouting "yellow," "cowards," and then "Shoot them! Kill them!" The bloodied foursome escaped into the courthouse. Police arrived but made no arrests. One officer commented, "Anyone foolish enough to commit such an unpatriotic gesture in South Boston can only expect what these people got."

But the resisters were not intimidated. They insisted that it was their patriotic duty to defy the government when it was acting illegally or immorally. Draft resisters made a distinction between their actions and those of men who left the country or used the system to get a deferment or favored placement that would require another to serve in their place. Resisters emphasized that they were not "draft dodgers" or draft evaders; they were men who refused induction and expected to pay the legal consequences for doing so.

"We owe it to our conscience, to the people of this county, to the principle of American democracy," he said, "to declare our independence of this war, to resist it in every way we can, until it comes to an end. . . ." 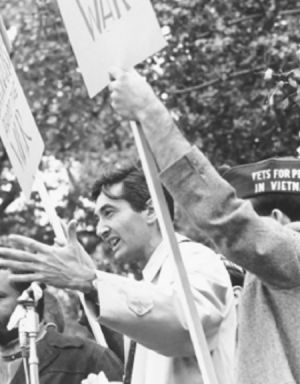 On October 16, 1967, over 5,000 people (most of them young) rallied on Boston Common. Many held signs with slogans such as "Don't Dodge the Draft: Oppose It." Local clergymen urged that "the moral conscience of America . . .not submit to national policies that violate honor, decency, human compassion." Boston University professor Howard Zinn was the final speaker: "We owe it to our conscience, to the people of this county, to the principle of American democracy," he said, "to declare our independence of this war, to resist it in every way we can, until it comes to an end. . . ."

The participants marched quietly from the Common to the Arlington Street Church. They filled the sanctuary, and an overflow crowd of 3,000 listened to the sermons over loudspeakers. At the end of the service, over 280 men came forward and turned in or burned their draft cards. Then they went home and waited to see how the government would respond.

Two and a half months later, on January 5, 1968, indictments were handed down. Five men were charged with conspiring to "counsel, aid, and abet Selective Service registrants to evade military service and refuse to carry draft cards." In addition to the Rev. Coffin and Dr. Spock, the "Boston Five" were Marcus Raskin, a Washington think-tank leader; teacher Mitchell Goodman; and seminary student Michael Ferber. Only Ferber was an actual draft resister. The government had chosen not to go after the hundreds of resisters — whose numbers could easily have overwhelmed the courts— but to focus on a group of older, established men that they identified as the ringleaders.

To the defendants' dismay, the presiding judge immediately ruled that testimony about the illegality of the war and the draft would not be allowed.

The New England Resistance welcomed the indictments as a chance to put the government's policies in Southeast Asia on trial. Opening statements were scheduled for late May. All through the spring, the national media covered speeches by the defendants and hundreds of draft card "turn ins."

The proceedings themselves proved anticlimactic. To the defendants' dismay, the presiding judge immediately ruled that testimony about the illegality of the war and the draft would not be allowed. The trial would determine only whether or not the defendants had broken the law. Four of the five, including Dr. Spock, were found guilty and sentenced to prison time; a year later, their convictions were overturned.

On this day in 1971, over 450 anti-war protesters occupied the historic Lexington Green and refused to leave. The Vietnam Veterans Against the War had organized a three-day march from Concord to Boston — Paul...

On this day in 1878, several thousand supporters of Ezra Heywood held an "Indignation Meeting" at Boston's Faneuil Hall. They were protesting his conviction and imprisonment on obscenity charges. Educated for the ministry, he had...