….The halls of the Massachusetts Legislature were opened for the first time to a woman. [Abolitionist] Wendell Phillips says of that meeting: "It gave Miss Grimke the opportunity to speak to the best culture and character of Massachusetts; … It was not only the testimony of one most competent to speak, but it was the profound religious experience of one who had broken out of the charmed circle, and whose intense earnestness melted all opposition. The converts she made needed no after-training. It was when you saw she was opening some secret record of her own experience that the painful silence and breathless interest told the deep effect and lasting impression her words were making."

But one hearing did not satisfy her, and the committee needed no urging to grant her another. At the second meeting, the hall was literally packed, and hundreds went away unable to obtain seats. When she arose to speak, there was some hissing from the doorways, but the most profound silence reigned through the crowd within. Angelina first stood in front of the Speaker's desk, then she was requested to occupy the Secretary's desk on one side, and soon after, that she might be seen as well as heard, she was invited to stand in the Speaker's place. And from that conspicuous position she spoke over two hours without the least interruption.

Quoted in The Grimké Sisters, Sarah and Angelina Grimké: The First American Women Advocates of Abolition and Women's Rights, by Catherine H. Birney (1885).

I am writing in regard to one of your on-line moments that appeared on February 21, 2005. The featured personage was Angelina Grimke. The text identified her as the first woman in America to ever address a legislative body. You may not be aware of a woman who addressed a legislative body almost two hundred years prior to Grimke. Her name was Margaret Brent and on January 21,1647/48 she went before the Assembly, the governing body of Maryland at that time, and requested the right to vote within the Assembly. The following is taken from the legislative records for that date and now preserved in the Maryland State Archives, Volume 1, page 215. "Came Mrs Margaret Brent and requested to have vote in the howse for herself and voice also for that att the last Court 3d Jan: it was ordered that the said Mrs Brent was to be lookd upon and received as his Lps Attorney. The Govr denyed that the sd Mrs Brent should have any vote in the howse And the sd Mrs Brent protested agst all proceedings in this pnt Assembly unlesse shee may have vote as aforesd." The story behind her request for vote and voice is too complicated to go into here but needless to say, she was very likely the first woman in America to go before a legislative body and most definitely prior to Angelina Grimke. While the actions of Ms Grimke and her sister deserve an honored place in the history of our country, Mistress Brent deserves equal notice. Your Massachusetts Moments website is great and I enjoyed looking through it. ------------------------- Dorsey Bodeman Director of Public Programs Historic St. Mary's City (Maryland) www.stmaryscity.org
Before Angelina Grimke

Thank you for correcting this "Mass Moment" -- and a misconception that many historians have.
"Profiles in Courage"

Angelina and Sarah Grimke were courage personified. Both truly were "profiles in courage." Prior to today I had never heard of neither, yet, in my opinion they deserve identity with all others who gained fame and glory in the struggle to overcome the evils of slavery and the granting of political rights to women. No doubt they were way ahead of their time as abolitionists and pioneers for women's rights. To read of their treatment and the harshness they were subjected to is, to use the jargon of our day, mind-blowing! As a male, I am amazed at the thinking of that time, the nature of society, and the way woman were valued. Its a shame the sisters Grimke will, in all probability, remain unsung heroes of American history -- certainly, they deserve better.

On this day in 1835, William Lloyd Garrison published a letter he received from Angelina Grimké, daughter of a South Carolina slave owner, in his newspaper The Liberator. Although Grimké and her sister Sarah were born in the South, they settled in the North and became Quakers and abolitionists. Because of their writings and speeches, they faced arrest if they ever returned to Charleston. Three years after Garrison published her letter, Angelina Grimké made history in Massachusetts by becoming the first woman to address a legislative body.

In 23 weeks, the Grimké sisters spoke before at least 88 meetings in 67 towns. 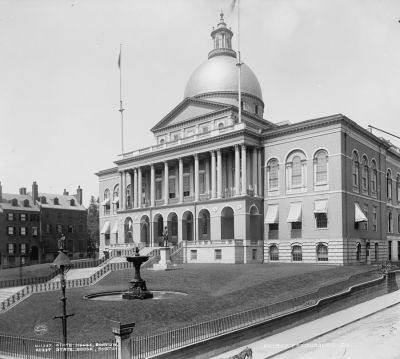 When Angelina and Sarah Grimké arrived in Boston in the winter 1838, they did not look like radical agitators. Dressed in sedate gray gowns with white kerchiefs and gloves, the sisters were the picture of simple, modest Quaker womanhood. But appearances can be deceiving: the Grimkés were anything but conventional.

The daughters of a wealthy South Carolina slaveholder, the sisters had early on discovered and denounced the cruelty of slavery. They had exiled themselves from their home state. They settled in the North and became Quakers and abolitionists. Because of their writings and speeches, they faced arrest if they ever returned to Charleston.

The Grimkés spent much of 1837 traveling from one Massachusetts town to another, describing their personal experience as slaveholders and calling for the immediate abolition of slavery. They were among the first American women who dared to speak in public, and they defied convention — and drew ridicule — by addressing mixed audiences of men and women.

In 23 weeks, they spoke before at least 88 meetings in 67 towns. By one estimate, they had reached, face to face, over 40,000 people, a staggering number for the time. They inspired an estimated 20,000 women to sign anti-slavery petitions. Petitioning — literally, pleading for legislators' attention — was the only political right American women had. They could not vote, stand for office, sit on a jury, or take any direct political action; all they could do was submit a plea — in the form of a petition — to government officials.

A pastoral letter read from pulpits in July 1837 accused them of threatening "the female character with wide spread and permanent injury."

As the first female anti-slavery agents, the sisters were harassed by hostile mobs, snubbed by polite society, and branded with scandalous slurs. They were denounced as unnatural, unsexed, and immoral.

The most strident opposition came from the state's Congregational clergy. A pastoral letter read from pulpits in July 1837 accused them of threatening "the female character with wide spread and permanent injury." The ministers concluded, "We cannot, therefore, but regret the mistaken conduct of those who encourage females to bear an obtrusive and ostentatious part in measures of reform, and countenance any of that sex who so far forget themselves as to itinerate in the character of public lecturers and teachers."

The sisters were undeterred. They were driven by a deep religious conviction that slavery was a sin and that working to end this sin was a binding moral obligation. Much to the dismay of most other abolitionists, including Angelina's fiancé Theodore Weld, they also felt compelled to speak out against the subjugation of women.

"The novelty of the scene, the weight of responsibility…— all together sunk me to the earth."

On February 21, 1838, the day after her 33rd birthday, Angelina Grimké entered the Massachusetts State House. The Grimkés' notoriety assured that the chamber would be packed. People curious to see the brazen, "unsexed" Miss Grimké filled the State House to overflowing hours before the session was scheduled to begin. As she made her way through the crowds, Angelina heard taunts from hostile onlookers. She later confessed, "I was never so near fainting under the tremendous pressure of feeling. My heart almost died within me. The novelty of the scene, the weight of responsibility…— all together sunk me to the earth."

But Angelina Grimké's deep religious convictions sustained her. "Our Lord and Master gave me his arm to lean upon and in great weakness, my limbs trembling under me I stood up and spoke." Her fellow abolitionist Lydia Maria Child later reported that Angelina "trembled and grew pale. But this passed quickly, and she went on to speak gloriously."

". . . as a moral being I feel that I owe it to the suffering slave and to the deluded master, to my country and to the world to do all that I can to overturn a system of complicated crimes. . . ."

This was the anti-slavery message the audience had expected, but Angelina Grimké went further. She asserted that it was her right as a woman to address the legislators on "the great and solemn subject of slavery. . . . Because it is a political subject, it has often tauntingly been said, that women had nothing to do with it." She forcefully insisted that "American women have to do with this subject, not only because it is moral and religious, but because it is political." Angelina Grimké had found the courage to make one of the very first public claims for American women's political rights.

The audience was spellbound. Some were thrilled, others appalled, by what they heard. Predictably, the abolitionist papers were admiring, while the mainstream press was scornful.

The sisters would continue lecturing, writing, and campaigning to bring an end to slavery and the subordination of women. Both would live to see the abolition of slavery; both would die decades before American women achieved the right to full participation in the political process.

Visit the Senate Chamber where Angelina Grimke addressed the Massachusetts legislature in 1838.

On this day in 1880, Lydia Maria Child, whom abolitionist William Lloyd Garrison called "the first woman in the Republic," was buried in Wayland. A successful novelist and magazine editor and the author of a...