All the Regiments landed and camped on the Common joining the Town. I intended to have marched the next morning but the Commanding officers all representing it as absolutely necessary for their providing necessaries for their men and taking care of their sick, baggage &c, I resolved to halt one day_, this day we had a Thanksgiving for the success of His Majesty's arms by the taking of Louisburg. I dined at the Governor's. Rum was much too plenty in the Town.

The Troops remained encamped on the Common of Boston where Thousands of people came to see them and would give Liquor and make the men Drunk in Spite of all that could be done. I sent patrol round the Town all day and night.

Quoted in The Journal of Jeffrey Amherst: Recording the Military Career of General Amherst in America from 1758-1763, ed. by J. Clarence Webster (University of Chicago Press, 1931).

My understanding is that Amherst College (est. 1821)was named after the town of Amherst. This happened long after General Amherst was gone. Also, General Amherst has been linked to genocide of native Americans. Amherst, Massachusetts is celebrating its 250 Anniversary this year and much of General Amherst's misdeeds have been featured locally in the Hampshire Gazette celebration supplement of September 17, 2009. ------------------------- R. K. Fleming
Amherst

Er, did you catch the Lord Jeffs part?
Amherst

And can you then believe that we have a King Phillip High School? Oppressed and heroic ...Native-American practitioner of genocide.
The Crown Point Road

After conquering Crown Point in 1759, Amherst ordered the building of a supply road from Crown Point (ten miles above Ticonderoga) over the Green Mountains to Fort Number Four in Charlestown, NH. Seventeen years later, Stoughton Private Ezra Tilden would march from Stoughton to Fort Ticonderoga, the last third and most difficult part of the journey being via that still very rough road. Ancient stone mile markers have been discovered along some sections of the road and the DAR erected many commemorative signs at various places in the early Twentieth Century. For some years, it was erroneously assumed by some that Henry Knox had brought the Ticonderoga cannon down to Boston via the Crown Point Road. The cannon came via the "easier" southern route, down the lakes and across central Massachusetts, a route which Tilden's Regiment takes the following summer when they arrive at Saratoga/Stillwater in time for the Battle.
Login

On this day in 1758, 4,500 British troops under the command of Jeffrey Amherst camped on Boston Common before setting off to fight the French. Newly promoted to Major-General, Amherst had recently engineered an important British victory at Louisburg in Nova Scotia. He would go on to win battles at Ticonderoga and Crown Point on Lake Champlain and play a critical role in dislodging the French from North America. Amherst's accomplishments made him a hero on both sides of the Atlantic. He was given the highest rank in the British Army, as well as a title. American colonists honored him by naming towns and schools after him, including the town of Amherst, Massachusetts, and the college founded there in 1821. However, "Lord Jeff," as he is often called, also has the dubious distinction of being involved with the first documented attempt at biological warfare. His role in the effort to "reduce" the Native population through smallpox via infected blankets during Pontiac's Rebellion has led to reappraisal of his place in history.

For the next 150 years, all students at the elite college would be male. The first women were not admitted until 1975. 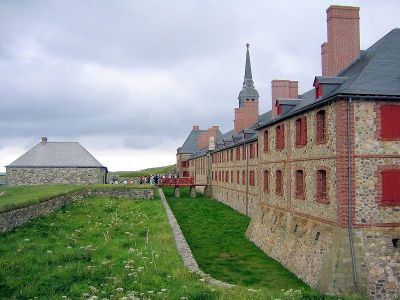 Jeffrey Amherst was already a hero when he and his men left Boston for Quebec in September of 1758.

Born in England in 1717, Amherst entered the British army at the not atypical age of 14. Although he was reasonably successful in his early career, it came as a surprise when in 1758 Prime Minister William Pitt promoted him to Major-General and put him in command of over 14,000 British troops. His mission was simple but daunting; he was charged with capturing the French stronghold of Louisburg on Cape Breton Island. Displacing the French from Louisburg would give the British a great strategic advantage on the American front.

Amherst's composure and perseverance served him well. After a two-month siege, the French surrendered on July 27, 1758. This would prove to be the turning point in the French and Indian War, or what Europeans more accurately called the Seven Years' War.

Having earned Pitt's, and the people's, confidence, Amherst was given command of all British troops in North America. Less than two months after the victory at Louisburg, he and his men left Boston for New France. They moved north from Albany towards Quebec, attacking French forts along the way. On July 27, 1759, exactly one year after his triumph at Louisburg, Amherst captured Fort Ticonderoga. Over the next year, he would play a vital role in the campaign to take control of Canada, which ended when the French surrendered Montreal on September 8, 1760.

. . .  he would play a vital role in the campaign to take control of Canada, which ended when the French surrendered Montreal . . . 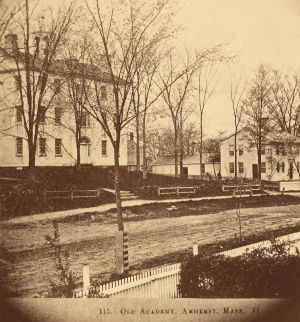 Hostilities between the English and Native people did not cease with the end of the French and Indian War. During an uprising in 1763 known as Pontiac's Rebellion, Amherst was involved in what is considered the first documented attempt at biological warfare in North America. The general proposed to one of his senior officers that they infect the attacking Indians by giving them blankets infected with smallpox. "Could it not be contrived to send the small pox among the disaffected tribes of Indians? We must on this occasion use every stratagem in our power to reduce them," he wrote in June 1763. A month later, he reiterated: "You will do well to inoculate the Indians by means of blankets, as well as every other method that can serve to extirpate this execrable race."

Apparently, however, Amherst was not aware that the commander at Fort Pitt in Pennsylvania had already attempted this very tactic. He had given representatives of the besieging Delawares two blankets and a handkerchief that had been exposed to smallpox. While Indians in the area did indeed come down with smallpox, it is unclear how many of them (if any) contacted the disease as a result of the infected blankets. The dread disease was already present in the environs and may have been spread to the natives by their own warriors returning from attacks on infected white settlements. There is no doubt that British soldiers attempted to infect their Indian enemies with smallpox, but there is no evidence as to whether or not the attempt was successful.

"Could it not be contrived to send the small pox among the disaffected tribes of Indians? We must on this occasion use every stratagem in our power to reduce them," he wrote in June 1763.

With the defeat of Pontiac's Rebelion, the king bestowed titles and promotions on Amherst. "Lord Jeff" became Governor of Virginia and then in 1778 Commander in Chief of the British Army. The American colonists found their own ways to honor the military hero. Several New England towns took his name, most notably Amherst, Massachusetts. When people living in the eastern half of the overcrowded Connecticut Valley town of Hadley formed themselves into a new district in 1759, they called it Amherst, in recognition of Lord Jeff. The district was incorporated as a town in 1775.

The village was a center for education early in its history. In 1814 Amherst Academy, a three-story brick preparatory school, opened. It enrolled around 200 boys and girls a year from Amherst and surrounding towns, including, in the 1840s, the future poet Emily Dickinson, whose father was one of Amherst's leading citizens.

In November of 1817, the Academy's trustees formed a committee to consider founding a college where young men with little or no money could study for the Christian ministry. What began as the Amherst Collegiate Institution in 1821 would become Amherst College only four years later. The first 25 graduates would receive degrees in 1825. For the next 150 years, all students at the elite college would be male. The first women were not admitted until 1975. For many years "Lord Jeff" served as an unofficial mascot for the college; however, in 2016 the trustees of Amherst College announced that Lord Jeffrey would no longer serve as its symbol, unofficial or otherwise.

Amherst has become a center of higher education in western Massachusetts. In 1863, the legislature chartered the Massachusetts Agricultural School, now the flagship campus of the University of Massachusetts. In 1972 a new college was founded within the town borders — Hampshire College. Amherst's three colleges are part of a five-college consortium that also includes Smith College in Northampton and Mt. Holyoke College in South Hadley. Students at the five colleges enjoy the benefits of cross-registration and library access.

On this day in 1873, Amherst College junior Melvil Dewey made a proposal to the faculty. He had been working in the college library and was frustrated by the lack of logic in the way...

On this day in 1759, a regiment of Massachusetts men serving in the French and Indian War began to talk of mutiny against their British commander. The colonel had decided not to release the volunteers...