To the Associated Press:

The last rail is laid! The last spike is driven! The Pacific Railroad is completed! The point of juncture is 1086 miles west of the Missouri River and 690 miles east of Sacramento city.

As a resident of the town of Easton for thity years I have seen lots of changes. From the Dam at Flyaway pond breaking and the flooding that accured that year to the building boom. Over the years I am glad to see alot of the beautiful sights to see were not destroyed. Boarderland park is one of my favorite places as I remembered camping there with boyscout troop 71 with Richard Daley as Scoutmaster. Also the antique car meets at the railroad station with the Easton built Morse car. I had my picture in the Easton paper sitting in that car. It was great growing up in the 60's in the 02334 section of town with Mrs. Anna Hanscom as Postmistress. A very wonderful lady I'll always remember. More later... ------------------------- Live Long and Prosper
The Ames Estate

Other great times were fishing at New pond and Old pond. Hiking through the woods down the old cart paths that criss-crossed from Poquanticut Ave to Bay Rd. To the Dairy farm that was at the 5 corners Rt. 106 on the left side toward Mansfield, we used to stop traffic on Foundry St to get the cows across to the other side. Also I remember that traffic was stop and go on Fri - Sat nights as traffic had to stop at the 5 stop signs that were at the 5 corners when everyone was going to the dog track. Traffic was backed up all the way up the hill to 123 Norton. Those were the days. Lol...
The Ames Estate

The workers from Ireland, China and other places were the primary builders of the railroad. Their contributions to the building the Transcontinental Railroad and to Massachusetts needs to be included in any article on this topic on Mass Moments.
Login

On this day in 1869, officials of the Union Pacific Railroad drove the symbolic "Golden Spike" to mark the completion of the first transcontinental railroad. Telegraph wires attached to the spike and sledgehammer carried the news across the country. Reporters compared the event to the first shot fired on Lexington Green. Back in Boston, Oliver and Oakes Ames, the Massachusetts men who had been instrumental in the success of the six-year project, accepted congratulations. The owners of the world's largest shovel manufacturing company, the brothers had supplied many of the tools used to build the railroad. They had also arranged much of the financing. When the details of those arrangements were revealed, their reputations were ruined in one of the greatest financial scandals in U.S. history.

Easton was an important iron-producing center throughout the eighteenth century and supplied both men and muskets to the Continental Army. 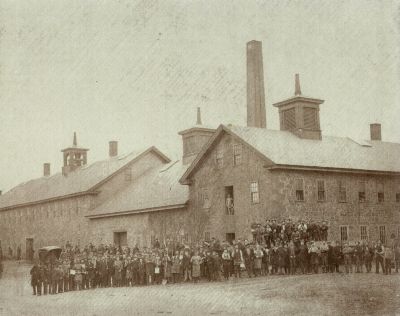 In the late 1860s, when the first transcontinental railroad line was nearing completion, Oakes Ames was known as the "King of Spades." With his younger brother Oliver, he owned Ames & Sons, the Easton, Massachusetts, company that led the world in the manufacture of shovels, picks, and other hand tools. But the Ameses' role in the railroad enterprise went well beyond making shovels for the workers. Both brothers were actively involved in raising the capital for the railroad's construction. As a result of their "creative" financing, Oakes Ames would acquire a new nickname — "Hoax Ames."

The industrial history of Easton, a small town 24 miles south of Boston, began with the discovery of bog iron there in the late 1600s. Easton was an important iron-producing center throughout the eighteenth century and supplied both men and muskets to the Continental Army.

In 1803 a blacksmith named Oliver Ames settled in Easton and took advantage of the town's tradition of iron manufacturing to establish the Ames Shovel Company. From its humble beginnings as a one-forge blacksmith shop, the Ames Shovel Company would grow to be the largest — as far as the owners and many of their customers were concerned — the finest shovel manufacturer in the country.

The early nineteenth century was a good time to be in the business of making shovels and picks. The new nation was expanding at a rapid rate; major public works projects — roads, bridges, canals — relied on manual labor, which meant a growing demand for hand tools.

Ames shovels were shipped to every part of the United States and to the far corners of the world — gold mines in Australia and diamond mines in South Africa. 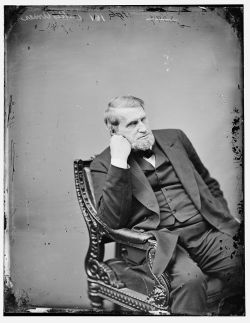 In the Mississippi Valley, an Ames shovel was considered so valuable that it was declared to be legal tender, accepted in lieu of cash. When the California Gold Rush hit, the Ames Company made a fortune selling shovels and picks to miners. Ames shovels were shipped to every part of the United States and to the far corners of the world — gold mines in Australia and diamond mines in South Africa. The Ames family grew wealthy. With the coming of the Civil War, government contracts for shovels and swords made them richer still.

Oliver Ames's sons, Oakes and Oliver, Jr., grew-up in the shovel-making business. Both boys attended local schools before entering their father's workshops to learn every step of the manufacturing process. Oliver Sr. eventually made his sons partners in the newly renamed firm of Oliver Ames & Sons. By the 1850s, the Ames brothers were middle-aged men of wealth and influence. Oliver Ames, Jr. was elected to the state senate in 1852 and 1857; Oakes served in the U.S. Congress from 1862 until 1873.

In January of 1865, President Lincoln called Congressman Ames to the White House. Lincoln believed that a transcontinental railroad was the key to tying a fragile union together. The competing efforts of the Union Pacific and Central Pacific Railroad Companies were suffering from infighting, poor management, and the inability to raise the huge amount of capital required. Lincoln appealed to the Massachusetts congressman: "Ames," he said in an oft-told story, "you take hold of this. . . .The road must be built, and you are the man to do it. Take hold of it yourself. By building the Union Pacific, you will become the remembered man of your generation."

"The road must be built, and you are the man to do it." 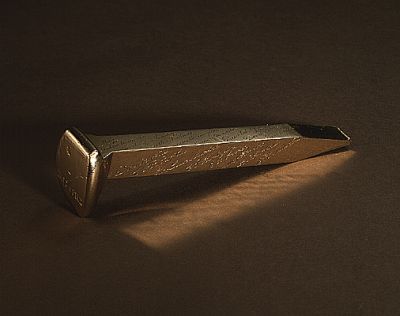 The Ames brothers seized the opportunity. In 1866 Oliver Ames took over as president pro-tem of the Union Pacific Railroad; he invested in Credit Mobilier, a construction company that handled contracts for the railroad. Oakes played an even larger role. One of the largest stockholders of Credit Mobilier himself, he used his position in Congress to influence legislation favorable to the railroads.

Oakes and Oliver Ames were in Boston on May 10, 1869, when the "Golden Spike" was driven into the railroad tie connecting the Union Pacific and Central Pacific lines. The Ames brothers knew that their shovels, their management, and their money had been critical in bringing about the historic event. For a brief time, it looked as though Oakes Ames might indeed be "the remembered man of [his] generation."

But there was trouble ahead. The Union Pacific Railroad, now headquartered in Boston, was deeply in debt and unable to pay many of its creditors. People began to complain that investors in Credit Mobilier had grown rich while contractors and workers went unpaid. On September 4, 1872, the New York Sun declared that Credit Mobilier was the "King of Frauds."

An investigation began. It found that Credit Mobilier's construction company had charged Union Pacific an inflated sum for its work; Union Pacific had paid the bills with government funds. Shareholders in both the railroad and Credit Mobilier had made fortunes. The resulting financial scandal was long considered the most serious in U.S. history.

For a brief time, it looked as though Oakes Ames might indeed be "the remembered man of [his] generation."

Although many men were involved, the investigators focused on Oakes Ames. Other legislators (especially those who had purchased Credit Mobilier shares from Ames) were happy to let him take the brunt of the scandal. In 1873 the House censured him; he returned home to Easton a broken man and died a few months later of a stroke.

A few years later Union Pacific hired the great American architect H.H. Richardson to design a monument to the Ames brothers. Located at Sherman Summit in Wyoming — the highest point on the Union Pacific line, it was originally visible to all passing trains. In the early twentieth century, however, the route was moved. Today the monument stands isolated and alone.

By contrast, the Ames legacy can be seen all over Easton. Although the shovel company passed out of family ownership and moved to West Virginia in the 1950s, the Ameses left a lasting mark on Easton's built environment. They hired H.H. Richardson to design Oakes Ames Memorial Hall, the Ames Free Library, and the Old Colony Railroad Station (now the Easton Historical Society), giving this small Massachusetts town a remarkable collection of architectural treasures.

Portions of the Governor Oliver Ames Estate are owned by the Trustees of Reservations and are open to the public.