From a profile of Dr. Estelle Glancy, research scientist at the American Optical Company, that appeared in the Worcester newspaper:

From planets to eyeballs is quite a jump — but at the American Optical Company in Southbridge there's a soft-spoken woman … who left astronomy for optics.

Miss A. Estelle Glancy, Ph.D., a research scientist, is believed to be the only woman lens designer in the United States. This year marks her 30th with the concern.

She's known wherever learned men doodle on scratch pads in optical jargon of millimeters, focal lengths, and limits of visibility. Pure science owes her a debt for many contributions. She has done much to bring modern eyeglasses to their present state and has designed lenses for cameras, telescopes, eyes-examining and military optical instruments.

Her work awes most people — it's so different from most of the jobs we know about. Out of the 5,000 employees at the American Optical Company, probably not more than six understand what she does … She does what she wants to do — she's that important.

The theory behind her work is the bringing of light rays to a focus, or point of concentration. It's all done with mathematics ….

…Dr. Glancy doesn't work with glass or machinery. But such is the magic of mathematics that she can assume a lens on paper, determine what it will do, plot the errors, and from a final graph pick the best form of lens for a prescription.

…One of her projects — an improved lens developed by Dr. Glancy's chief-in-research, Dr. E. E. Tillyer — filled four volumes. It took more than 10 years! But the result was the Tillyer corrected ophthalmic lens, a boon to better eyesight. These glasses yield a much wider field of vision than was possible before ….

Thank you for shedding a lot more light on the founding of AO than is done in the description on Old Sturbridge Village's own web site (and hence in Wikipedia): "George Washington Wells had started with a modest central Massachusetts "spectacle shop" in the late 1840s and built it into a major firm by the turn of the century."
Login

On this day in 1983, Southbridge celebrated the 150th anniversary of the nation's oldest optical company — the American Optical Company, or "the A.O." as it was known in the Worcester County town where it began. In 1833 William Beecher opened a spectacle shop. Over the next two decades, the little workshop became a thriving enterprise. By 1879 George Wells, a former apprentice and mechanical genius, owned a controlling interest in what was now called the American Optical Company. Wells built the A.O. into the largest optical company in the world. His three sons carried on the firm, but they also started a new venture: they created Old Sturbridge Village, a nationally renowned living history museum.

Like a number of other industrialists (such as Henry Ford, who founded Greenfield Village in Michigan), the Wells brothers shared a passion for collecting historical artifacts. 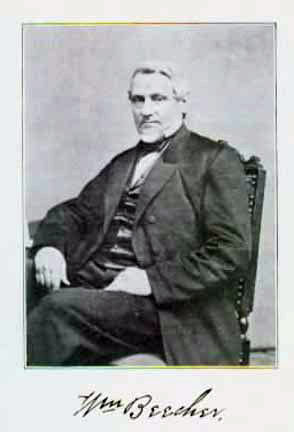 George Wells, founder of the American Optical Company, had technical skill, ingenuity, and a willingness to take risk. These qualities shaped his company and made it an early industrial success story. His sons followed him into the business and shared his drive for advanced optometry. But along with their interest in cutting-edge technology, the Wells family had a passion for the past, a passion that produced Old Sturbridge Village.

It makes sense that Old Sturbridge Village re-creates the period in history that gave birth to the American Optical Company. In 1826 William Beecher, a jeweler and watchmaker, settled in Southbridge, a small town on the Massachusetts/Connecticut border. He was part of a relatively new trend — jewelers expanding into the business of spectacle making.

In the 1700s and early 1800s, almost all spectacles sold in the United States were imported from Europe, which had a 600-year-old tradition of making glass and crystal lenses to magnify images. When the War of 1812 cut off trade with Great Britain, a Scottish immigrant decided to manufacture his own gold and silver frames and add American-made lenses. The venture was a success, and many jewelers branched out into making frames and lenses.

When the War of 1812 cut off trade with Great Britain, a Scottish immigrant decided to manufacture his own gold and silver frames and add American-made lenses. 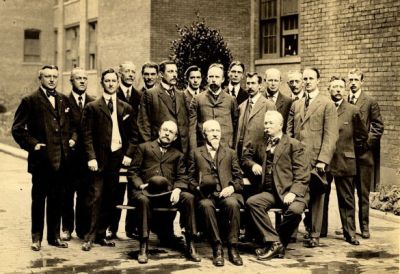 Just at this time, George Wells, a schoolteacher from nearby South Woodstock, Connecticut, left his job to become an apprentice at Robert H. Cole and Co. Young Wells had a genius for mechanics. Soon the 18-year-old was inventing new machines that solved longstanding manufacturing problems; spectacle production increased dramatically.

Within seven years of his arrival in Southbridge, William Beecher opened a shop above his jewelry store to manufacture spectacles. This part of Beecher's business prospered. He taught one of his apprentices, a 14-year-old boy named Robert Cole, to craft the first steel-framed spectacles made in America. Steel was less expensive than gold or silver, and the steel-framed spectacles were instantly popular. Beecher expanded, and competitors opened other shops nearby. Steel frames were soon outselling all other kinds, and Southbridge became a center of the American spectacle-making industry. When Beecher retired in 1862, Robert Cole took over the firm.

When Robert Cole foolishly refused to raise Wells's pay, the youth went to work for a competitor. Several times Cole hired Wells back, but he could not keep him. The young mechanic bought an interest in a competing business. In 1869 Cole proposed merging the two concerns; the result was the American Optical Company.

Over the next 30 years, George Wells developed and patented 26 different tools for splitting, cutting, and grinding lenses and for milling spectacle frames.

At the age of 23, George Wells was co-owner of what would eventually become one of the largest and most respected optical companies in the world. The risk-taking Wells bought a big textile mill with the best water rights in Southbridge. He converted the textile mill to an optical factory. By almost single-handedly turning Southbridge from being a textile town to an optical town, George Wells ensured its prosperity for generations. Within ten years, he had gained majority control of the company stock. By 1879 American Optical was a Wells family business.

Over the next 30 years, George Wells developed and patented 26 different tools for splitting, cutting, and grinding lenses and for milling spectacle frames. The company thrived. Eventually George's sons — Channing, Albert, and Cheney — joined their father. All three followed his example of hard work and innovation. The company maintained its reputation for excellence and innovation, producing some of the first cylindrical and compound lenses, full-view frames and bifocals, and the Lensometer.

Like a number of other industrialists (such as Henry Ford, who founded Greenfield Village in Michigan), the Wells brothers shared a passion for collecting historical artifacts. Albert (or A.B. as he was known) especially enjoyed searching out and saving objects used by ordinary people in rural New England. Perhaps because his own livelihood depended on precision machinery, A.B. loved what he called "primitives," things that had been handmade, particularly if they were ingenious in design. Cheney Wells preferred to collect old clocks and timepieces. Channing's special interest was furniture.

The leading force was A.B.'s son George, who envisioned a working village complete with craftsmen and other costumed staff who would help visitors experience the past by participating in it.

By the 1930s the Wells's collections had outgrown their homes and worn thin the patience of their wives. In 1935 they incorporated the Wells Historical Museum; the next year they decided to create an open-air "living museum." The leading force was A.B.'s son George, who envisioned a working village complete with craftsmen and other costumed staff who would help visitors experience the past by participating in it. It was a bold plan, and the other members of the family embraced it.

They purchased a 153-acre tract in the neighboring town of Sturbridge and began searching for buildings they could buy and move to the site. The hurricane of 1938 almost destroyed the project, but the Wellses persevered. In 1946 Old Sturbridge Village opened to the public, with George's capable wife, Ruth Dyer Wells, as the first director. Ruth Wells would play a crucial role in the museum for the next 35 years.

At the same time, American Optical continued to grow. By mid-century its plants covered 17.5 acres of floor space in 36 different buildings. But the business began to suffer from foreign competition. By 1992 the company had relocated its manufacturing operations to Mexico, and five years later, the corporate headquarters moved to San Diego. In 1980 the U.S. Department of Defense signed a long-term lease on AO's property for use as a training center. Demolition of the main plant left the factory facade as a reminder of the American Optical Company's place in Southbridge's history and in its heart.

Old Sturbridge Village is 50 miles due west of Boston.

The Optical Heritage Museum preserves and interprets the history of Southbridge and the American Optical Company.

On this day in 1985, Polaroid won a huge victory in federal court. A judge ruled that Kodak had violated Polaroid's patents for instant photography. The decision ended a nine-year legal struggle between the two...