From "Why Go to College?," an address by Alice Freeman Palmer:

To a largely increasing number of young girls college doors are opening every year. Every year adds to the number of men who feel as a friend of mine, a successful lawyer in a great city, felt when in talking of the future of his four little children he said, "For the two boys it is not so serious, but I lie down at night afraid to die and leave my daughters only a bank account." Year by year, too, the experiences of life are teaching mothers that happiness does not necessarily come to their daughters when accounts are large and banks are sound, but that on the contrary they take grave risks when they trust everything to accumulated wealth and the chance of a happy marriage. Our American girls themselves are becoming aware that they need the stimulus, the discipline, the knowledge, the interests of the college in addition to the school, if they are to prepare themselves for the most serviceable lives.

But there are still parents who say, "There is no need that my daughter should teach; then why should she go to college?" I will not reply that college training is a life insurance for a girl, a pledge that she possesses the disciplined ability to earn a living for herself and others in case of need, for I prefer to insist on the importance of giving every girl, no matter what her present circumstances, a special training in some one thing by which she can render society service, not amateur but of an expert sort, and service too for which it will be willing to pay a price. . . .

While it is not true that all girls should go to college any more than that all boys should go, it is nevertheless true that they should go in greater numbers than at present. They fail to go because they, their parents and their teachers, do not see clearly the personal benefits distinct from the commercial value of a college training.

Published in pamphlet form by Thomas Crowell and Co., 1897.

Two comments: 1) Mrs. Palmer was 47 when she died, not 41. (born Feb. 21,1855, died in late 1902) 2) I have a biography of Mrs. Palmer written by her husband and published a few years after her death. She was certainly a fascinating and inspiring woman. Massachusetts can be proud of both her and her husband!
Alice Freeman Palmer

Ah, yes - the math eluded us! I've corrected her age at death in the essay. Thanks for your comments!
Login

On this day in 1887, Alice Freeman, charismatic president of Wellesley College, wed Harvard professor George Palmer, to the consternation of many Boston intellectuals. In her six years as president, Freeman had transformed the fledgling school from one devoted to Christian domesticity into one of the nation's premier colleges for women. Bright, charming, dedicated, and a gifted administrator, Freeman was considered a model of the "New Woman." But when she married, Alice Freeman bowed to Palmer's desire that she resign her presidency. Friends and colleagues felt betrayed. But the Palmers shared equally in domestic and professional responsibilities, and eventually Alice Freeman Palmer served as the first dean of women at the new, coeducational University of Chicago.

Within two years, the dedicated and popular teacher was appointed the nation's first female college president. She was 27 years old. 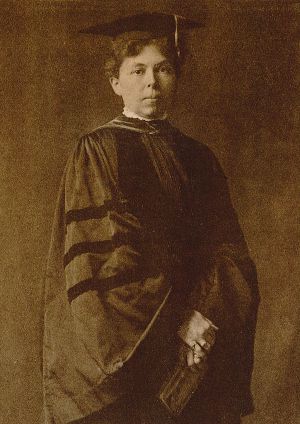 Alice Freeman was born on a farm in upstate New York in 1855. The family was dogged by poor health and financial difficulties. As the oldest of four, Alice learned early to take responsibility. She was diligent, efficient, dependable, and very bright. She attended a co-educational academy; when she graduated, she was determined to go to college. This was an extraordinary idea in 1871; her parents agreed only when she promised she would not marry until she had paid them back for her own and her siblings' education.

In 1872 the 17-year-old entered the University of Michigan, which had begun admitting women only two years earlier. Dedicated and hardworking, she was an excellent student, and her sociable nature made her popular with students and faculty alike. She took teaching jobs to earn money but still graduated in four years and was given the honor of speaking at commencement.

University of Michigan President James Angell enthusiastically recommended Freeman to Henry and Pauline Durant, who were founding a women's college outside of Boston that was to have an all-female faculty. Twice the Durants offered Freeman positions at Wellesley — first in mathematics, then in Greek— and twice she turned them down, feeling that her family needed her to be closer to home. In 1879 she finally accepted a position as head of the history department at Wellesley. Within two years, the dedicated and popular teacher was appointed the nation's first female college president. She was 27 years old.

Freeman set to work transforming the college into a serious institution of higher education. She raised admission standards and established 15 "feeder schools" to prepare qualified applicants. She recruited a distinguished faculty and developed a rigorous academic curriculum. She provided a domestic atmosphere for students by creating the "cottage system," where students and faculty lived together in small, comfortable homes.

She also devoted herself to improving the image of educated women. There was still much debate over whether higher education for women was necessary, or even advisable. Some opinion makers believed that intense study would injure women's health; others worried that it would deprive women of their femininity. Alice Freeman demonstrated that a woman could maintain her feminine character and still develop her intellect. Attractive and socially engaging, she put to rest the claim that education un-sexed women. She presented herself as the model of the "New Woman."

By 1884, Alice Freeman, whom adoring students called "the Princess," was a prominent figure on the national stage. She was interviewed by the popular press, appeared in magazine stories, and was in demand as a public speaker. In Boston, she attracted much attention as a respected, financially independent, successful academic woman devoted to promoting women's education. Then she met George Palmer.

A conventional marriage would require her to subordinate her goals to her husband's. And, indeed, George Palmer insisted that she resign the Wellesley presidency.

A professor of philosophy at Harvard, Palmer was 42, a widower with no children. The two fell in love. When Palmer proposed marriage in 1886, Freeman faced a dilemma. A conventional marriage would require her to subordinate her goals to her husband's. And, indeed, George Palmer insisted that she resign the Wellesley presidency.

He respected all that Alice Freeman had accomplished, but he believed that she had finished her most important work at Wellesley. More critically, he was convinced that the demands of the job posed a serious threat to her always frail health. In fact, she was near exhaustion and beginning to show signs of the tuberculosis that had claimed her sister's life. Alice agonized over the decision for months before finally agreeing to leave Wellesley.

The dual announcement of her engagement and her resignation was greeted with shock, delight, and dismay. Palmer later remembered, "It excited much public debate at the time, and probably influenced more people for good or ill than any other event of her life." Anti-feminists claimed it was proof that women were unreliable as professionals; feminists expressed deep disappointment.

Palmer and Freeman planned an unconventional marriage.. . . a happy marriage, they believed, was one that allowed both spouses to lead productive lives outside the home.

What the public did not know was that Palmer and Freeman planned an unconventional marriage. They had committed themselves to continuing their careers; a happy marriage, they believed, was one that allowed both spouses to lead productive lives outside the home.

Alice Palmer retained her position as a leader in higher education. After a respite to regain her health, she began lecturing, writing articles for popular magazines, consulting, and serving on numerous boards, including the Massachusetts State Board of Education. For three years in the early 1890s, she served as the first dean of women at the University of Chicago. George Palmer not only accepted her travel and frequent absences, he took over much of the management of their home in Cambridge.

The Palmers' "marriage of comradeship" ended with Alice's death at the age of 47 in 1902. In combining the roles of academic leader and attentive wife, she achieved what one historian calls "a grand compromise that encompassed both fulfillment and sacrifice."

Papers from the presidency of Alice Freeman are in the collection of Wellesley College's Special Collections and Archives.

Alice Freeman Palmer: The Evolution of a New Woman, by Ruth Bordin (University of Michigan Press, 1993).