Bell and Watson Communicate by Telephone for the First Time

Mr. Watson was stationed in one room with the Receiving Instrument. He pressed one ear closely against S and closed his other ear with his hand. The Transmitting Instrument was placed in another room and the doors of both rooms were closed.

I then shouted into M the following sentence: "Mr. Watson - Come here —I want to see you." To my delight he came and declared that he had heard and understood what I said.

I asked him to repeat the words. He answered "you said `Mr. Watson —come here —I want to see you'." We then changed places and I listened at S while Mr. Watson read a few passages from a book into the mouth piece M. It was certainly the case that articulate sounds proceeded from S. The effect was loud but indistinct and muffled.

If I had read beforehand the passage given by Mr. Watson I should have recognized every word. As it was I could not make out the sense — but an occasional word here and there was quite distinct. I made out "to" and "out" and "further," and finally the sentence "Mr. Bell Do you understand what I say? DO-YOU-un- der-stand-what-I-say" came quite clearly and intelligibly.

On April 4, 1877, the world's first regular telephone line commenced operation, connecting the machine shop of Charles Williams at 109 Court Street, Boston, with his home in Somerville. Bell wrote to his wife Mabel:

I went into his office this afternoon and found him talking to his wife by telephone. He seemed as delighted as could be. The articulation was simply perfect, and they had no difficulty in understanding one another. The first Telephone line has now been erected and the Telephone is in practical use!

William Preece, chief engineer of the Post Office, wrote in his diary on May 17, 1877 :

During the day we sweltered in the western union building and during the evening we attended a lecture by Professor Bell on his telephone. We heard an organ distinctly that was played in New Brunswick 32 miles off, and conversed with a man there. Cyrus Field and I spoke and were answered clearly. It is a very wonderful performance and I am simply lost in amazement not so much at the performance itself as at the simplicity of the apparatus employed in producing the phenomenon.

I did not realize that Bell had been a Bostonian. He was also a geographer, the first president of the National Geographic Society. His son-in-law was the second president, and every president of the society since then has been a descendant -- the Grosvenors. Alexander Graham Bell's office is still in the NGS headquarters in Washington, but it has a new phone on the desk. ------------------------- James Hayes-Bohanan Professor of Geography Bridgewater State University
Login

On this day in 1876, Alexander Graham Bell held a two-way telephone conversation with Thomas Watson, and achieved his goal of inventing an electrical device that would receive as well as transmit spoken sounds. Bell continued to improve the quality and distance of transmissions and made rapid progress. Within six months of the first two-way call, Bell would conduct a telephone conversation between Boston and New York City. Although his patents and the success of the Bell Telephone Company, which he established in 1877, made the young inventor a very rich man, his interests remained in experimenting, inventing, and improving the welfare of the deaf.

Within six months of the first two-way call, Bell would conduct a telephone conversation between Boston and New York City. 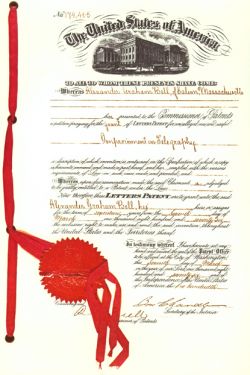 Alexander Graham Bell was born in Edinburgh, Scotland, in 1847. The men in the family were blessed with deep and sonorous voices and a talent for communication. His paternal grandfather had been a well-known actor and orator who also wrote books of advice for people with stammers and other speech impediments. Alexander Bell's mother was deaf, and his father was passionately committed to helping the deaf learn to speak. Melville Bell developed "Visible Speech," a system for notating spoken sounds, and traveled the world demonstrating how it could open the world of the spoken word to the deaf.

Bell followed in his father and grandfather's footsteps. Believing that his mother might understand his words through the vibration of his voice, he would lean very close to her and speak in low, sonorous tones. He also mastered Visible Speech and sometimes accompanied his father and older brothers on the lecture circuit. The Bells turned their demonstrations into popular entertainment. One brother would leave the theatre while the others took down audience comments in Visible Speech. The absent brother would return and re-create the conversation, using only the notations on the board. Audiences were astonished, and for a while the Bell family supported itself through these stage performances.

Alexander Bell's mother was deaf, and his father was passionately committed to helping the deaf learn to speak.

The young Alexander did a lot of tinkering and a lot of thinking. He had a knack for inventing gadgets and machines. He was fascinated with one problem in particular: he wanted to create a machine for transmitting speech. He and his brothers built a working model of a mouth, throat, nose, and movable tongue, and attached a set of bellows for lungs. They were so successful in getting the model to wail "MaMa" that the neighbors began to search for a child in distress.

At university Bell read the work of a German physicist who theorized that electrical tuning forks and resonators could be used to produce vowel sounds. Bell's German was poor, and he mistranslated one key word. He mistakenly thought he had read that vowel sounds could be transmitted over a wire. He began to pursue the idea.

He was teaching the Visible Speech method at the Boston School for Deaf Mutes when he fell in love with one of his students, Mabel Hubbard. His marriage confirmed his calling as a teacher of the deaf.

The grateful father of another student offered to provide financial backing for all of Bell's experiments and to secure patents for his inventions. Although Bell continued to teach, he now had the opportunity to develop his idea of using electricity to transmit speech.

He and his brothers built a working model of a mouth, throat, nose, and movable tongue, and attached a set of bellows for lungs.

Bell used a friend's machine shop in Boston as his laboratory. There he met Thomas Watson, and the two men began experimenting with transmitters and electromagnets. Soon Bell had discovered a way to use the sound waves transmitted by a voice to make a wire vibrate.

On March 7, 1876, he received a patent on a device that could transmit human speech over a wire. According to his journal, three days later he put the "Receiving Instrument" in one room and the "Transmitting Instrument" in another with the doors of both rooms closed. Bell shouted, "Mr. Watson, Come here, I want to see you." To his delight, Watson "came and declared that he had heard and understood what [Bell] said." This event would later be considered the first telephone call ever made.

Bell's invention of the key mechanics of the telephone has been called into question from the beginning, and recently, quite convincingly, by science writer Seth Shulman. He may or may not have copied the patent application of Elisha Gray. It is clear, though, that Bell envisioned a world in which people could communicate each across distances with ease.

Extraordinary as his invention was, Bell's ultimate goal was an electrical device that would receive as well as transmit spoken sounds. Success came on October 6, 1876, when he held a two-way telephone conversation with Thomas Watson. Bell continued to improve the quality and distance of transmissions and made rapid progress. Within six months of the first two-way call, Bell would conduct a telephone conversation between Boston and New York City.

Bell's patents and the success of the Bell Telephone Company, which he established in 1877, made the young inventor a very rich man. But Bell had little interest in the business end of telecommunications. Instead, he continued to experiment and invent. He created an electric probe to locate metal objects such as bullets in the body and a vacuum jacket that provided a type of artificial respiration, and he remained devoted to improving the welfare of the deaf.

There are several sites in the Boston area associated with Bell's experiments with the telephone. The first telephone experiment took place at 109 Court Street in Boston, which no longer exists. A marker commemorating the event is located on Cambridge Street in front of the JFK Building.

A demonstration of a telephone call between Salem and Boston was held in Salem at the Lyceum Hall on Church Street.

Disability History Museum: Alexander Graham Bell and His Role in Oral Education Bell’s papers are at the Library of Congress. Lemelson-MIT Historical Inventors

Alexander Graham Bell: The Life and Times of the Man Who Invented the Telephone, by Edwin S. Grosvenor (Harry Abrams, 1997).