We have made an arrangement with the proprietor of an estate of about a hundred acres... For picturesque beauty, both in the near and the distant landscape, the spot has few rivals. A semicircle of undulating hills stretches from south to east, among which the Wachusett and Manadnoc are conspicuous. The vale, through which flows the Nashua, is esteemed for its fertility and ease of cultivation, is adorned with groves of nut trees, maples, and pines, and watered by small streams. Distant not thirty miles from the metropolis of New England, this reserve lies in a serene and and sequestered dell. No public thoroughfare invades it, but it is entered by a private road. The nearest hamlet is that of Stillriver, a field's walk of twenty minutes, and the village of Harvard is reached by a circuitous and hilly road of nearly three miles…. The present buildings being ill placed and unsightly, as well as inconvenient, are to be temporarily used, until suitable and tasteful buildings in harmony with the natural scene can be completed. An excellent site opens itself on the skirts of the nearest wood, affording a view of the lands of the estate, nearly all of which are capable of spade culture. It is intended to adorn the pasture with orchards, and to supersede ultimately the labor of the plough and cattle by the spade and the pruning knife...

The text of Louisa May Alcott's "Transcendental Wild Oats" can be found here: http://womenshistory.about.com/od/alcottlouisamay/a/lma_transcend.htm
new information

A recent historic structures report conducted at the Fruitlands Farmhouse indicates that the house was built in about 1828. Therefore, the description of it in 1843 as "old and delapitated" may say more about the Alcott's perceptions of the rural farmhouse than the actual condition of the house. The house was less than 20 years old and had fewer refinements than more urban homes at the time.
Login

On this day in 1843, a group of three adults and five children made its way from Concord to the town of Harvard. Their destination was an old and dilapidated farmhouse in a beautiful but remote valley. The Transcendentalist philosophers Bronson Alcott and Charles Lane were bringing their families to start a utopian community they would call "Fruitlands." At its peak, Fruitlands had 12 members. For seven months the group tried to live pure and spiritual lives, surviving only on what they could grow and devoting themselves to philosophical study. But by autumn it was clear the chances of surviving the winter were slim. The experiment was abandoned. Thirty years later Louisa May Alcott, now a famous author, wrote an account of her family's time at Fruitlands.

They ate no meat, fish, milk, eggs, butter, or cheese; in fact, their diet was limited to whole-grain bread (made by Bronson himself), fruit, vegetables, and water. 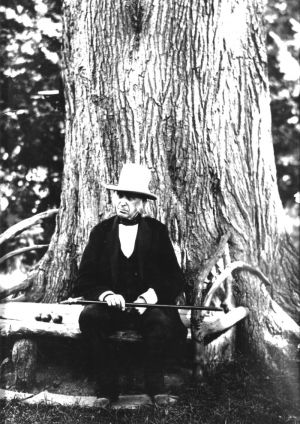 Louisa May Alcott, author of the American classic Little Women, is best known for stories about happy, wholesome, conventional families. However, her own family hardly fit this description. Louisa's father Bronson, the Concord philosopher, teacher, and friend of Emerson and Thoreau, was determined that he and his family would live by his ideals, no matter how impractical they might be.

In 1843 when Louisa was ten years old, Bronson Alcott founded a utopian community he called "Fruitlands." For his wife and daughters, the move to a communal farm in the central Massachusetts village of Harvard marked the beginning of an unusual and ultimately disastrous experiment.

Bronson Alcott was a leading member of the Transcendentalist movement that emerged in the 1830s. Transcendentalists rejected institutionalized religion; they believed that knowledge of the divine came from intuition, and that individuals could find this knowledge through observing and experiencing nature. Alcott began as a teacher, setting up experimental schools based on the idea that children are born good and simply need to be allowed to let their innate knowledge unfold, like a rose blooming, as they grow.

In time, Alcott and other Transcendentalists came to view social institutions as corrupting man's true goodness. They considered money and commerce to be demeaning, industrial work to be soul-deadening, and the desire for material possessions to be degrading. Like other Transcendentalists, Alcott rejected many institutions and customs he considered oppressive. Slavery was the great crime, but any exploitation of one creature's labor by another was unacceptable. Everywhere he looked, Bronson Alcott saw people appropriating the work of their fellow human beings and of animals in a way he believed was immoral. He introduced a vegetarian diet to the family; eventually, he also eliminated caffeine and other foods he considered artificial stimulants.

a beautiful place surrounded by hills, green fields, and wood, . . . Wachusett and Monadnoc Mountains are in sight." 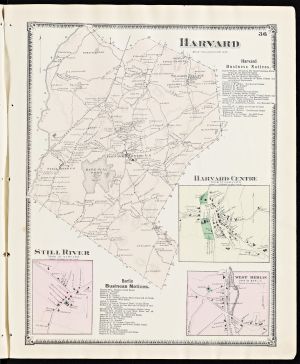 By the 1840s Bronson Alcott was convinced it was impossible to live a moral, spiritual life while a member of mainstream society. He visited several utopian communities, such as Brook Farm in Roxbury and the Shakers in Harvard, but none met his standards. In 1843 with Ralph Waldo Emerson as a trustee, backing from an English disciple named Charles Lane and financial help from his brother-in-law, Alcott founded "Fruitlands," his own utopian experiment.

The site Alcott and Lane chose was indeed idyllic. Louisa's 12-year-old sister Anna described it "a beautiful place surrounded by hills, green fields, and wood, . . . Wachusett and Monadnoc Mountains are in sight." With his faith in the power of nature, Alcott was delighted with the spot.

The goals for the community were straightforward, if extreme. The members would practice subsistence farming, live off the fruit of the land, and so avoid any contact with the market or money. They would eschew "pollutants" such as manure-fed crops; they would purify their bodies by denying themselves stimulants such as alcohol, caffeine, warm water, and sex. They would purify their spirits by living morally and avoiding any form of exploitation, which meant no bought goods, no products of slavery, no animal products or animal labor, no private property. A regimen of days spent laboring on the land and evenings in philosophical discussion would lead them to greater knowledge of their own souls and of the divine "oversoul."

When a visitor asked if there were beasts of burden at Fruitlands, she replied "Only one woman."

The group that gathered at Fruitlands in June of 1843 was indeed a motley lot. There were 12 adults, all of whom shared at least one trait: they had rejected conventional society. Over the next seven months, ten men and two women — Bronson's devoted wife Abigail and Ann Page, a teacher from Providence — would call Fruitlands home. The group included a baker looking for spiritualism who would eventually become a Catholic priest, a nudist, a farmer who bucked social values by refusing to cut his beard, a man who inverted his name to proclaim his freedom from social control, a cooper who had previously been in an insane asylum, and a man who rebelled against the status quo by swearing at everyone he met. Alcott and Lane were the acknowledged leaders.

Living strictly by their principles meant dressing only in linen clothes — tunics and bloomers for men and women alike — and wearing canvas shoes, as cotton was the product of slave labor, wool belonged to the sheep, silk to the worm, and leather to the cow. They ate no meat, fish, milk, eggs, butter, or cheese; in fact, their diet was limited to whole-grain bread (made by Bronson himself), fruit, vegetables, and water. They used no sweeteners, as sugar was a slave crop and honey belonged to the bees. They worked the fields without the help of draft animals, since hitching an animal to a plow was an appropriation of its labor.

After Ann Page was expelled for eating a piece of fish, Abby Alcott was burdened with all the woman's work. When a visitor asked if there were beasts of burden at Fruitlands, she replied "Only one woman."

As cold weather approached, it became clear that they could not survive the winter at Fruitlands with little food, less firewood, and thin linen clothing.

It is hardly surprising that problems soon arose. Some members objected to Alcott's strict, some said despotic, rule and felt that the regimen was too severe. Others complained that Lane and Alcott spent too much time traveling and philosophizing and not enough time farming.

For his part, Charles Lane complained that Bronson Alcott was too devoted to his wife and that Abby Alcott favored her children. But the greatest problem was one of practicality: only one of the participants had ever farmed, and without draft animals or manure, the community simply could not produce enough to survive.

By the end of the summer, the community had dwindled to the Alcotts, Lane and his son, and the bearded farmer Joseph Palmer. Lane and Alcott went off to recruit new members, leaving Palmer and Abby Alcott to bring in the meager harvest. As cold weather approached, it became clear that they could not survive the winter at Fruitlands with little food, less firewood, and thin linen clothing.

Finally, in the depths of winter, Abby took her four young daughters and, with help from her brother, rented a small farmhouse in a nearby village. Shortly afterward, the Lanes joined the Harvard Shaker community. Deeply depressed, Bronson Alcott took to his bed alone in the house at Fruitlands. Only after weeks of anguish could Abby persuade him to join her and the children. The family eventually returned to Concord.

In 1914 author and preservationist Clara Endicott Sears restored the Fruitlands farmhouse to her vision of its condition in 1843 and opened it as a museum devoted to Bronson Alcott's utopian experiment and the Transcendentalist movement. Today Fruitlands Museums also houses Clara Sears's collections of Shaker, Native American, and New England art and culture.

The Fruitlands Museum became part of the Trustees of Reservations in 2016. The museum includes the house in which the Alcotts lived as well as buildings moved to the site that house collections of 19th century American painting and Shaker arts and crafts, which reflect the stewardship of Clara Endicott Sears.

This Mass Moment occurred in the Central and Greater Boston regions of Massachusetts.

Fruitlands: The Alcott Family and Their Search for Utopia, by Richard Francis (Yale University Press, 2010).

Louisa May Alcott, by Susan Cheever (Simon and Schuster, 2010).

Transcendental Wild Oats and Excerpts from the Fruitlands Diary, by Louisa May Alcott (Harvard Common Press, 1995).

"Orpheus at the Plough: The Father of 'Little Women'," by Geraldine Brooks in The New Yorker, January 10, 2005.

On this day in 1841, the Shakers in Harvard reported a spiritual visit by their long-dead founder Mother Ann, "Holy Angels," and "ancient Saints and departed spirits." Shaker communities across New England were receiving such...

Quaker Mary Dyer is Taken to the Gallows