There would be a meeting in Belknap Street Church [another name for the African Meeting House] on Thursday evening March 23 at the usual house, at which Joshua Coffin* will give a narrative of his recent tour of the south with numerous anecdotes of self-emancipated slaves! A collection will be taken to aid the cause. The general public is invited.

*A native of Newbury, Massachusetts, John Coffin was one of the 12 founding members of the New England Anti-Slavery Society.

On this day in 1806, the Reverend Thomas Paul was installed as pastor of the new African Meeting House in Boston. Two days later, the church was officially dedicated. The Meeting House served as a spiritual, social, and physical haven for the black community of Boston, many of whom lived on the northern slope of Beacon Hill. Members gathered at the Meeting House to worship but also to plan political action. Black children attended school there. It was the setting for musical concerts, dramatic productions, debates, lectures, and more. In 1972 the Museum of African American History acquired the Meeting House and has since restored it to its 1854 design. It is the oldest extant African American church building in the United States.

The building was sold to a Jewish congregation, which used it through much of the twentieth century. 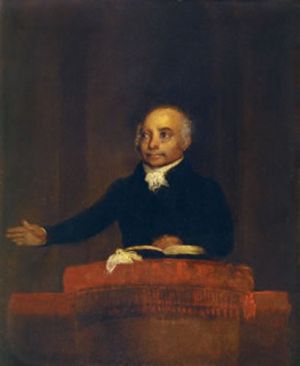 After the courts ruled against slavery in the Commonwealth in 1783, black men and women intensified their efforts to establish a vibrant community, to educate themselves, to gain an economic foothold in the fledgling nation, and to free those still held in bondage. The church played a central role in all of these endeavors.

In seventeenth- and eighteenth-century Massachusetts, African American worshippers were generally relegated to seats in the church balcony. On occasion, when blacks refused to sit in these segregated "Negro pews," white deacons forcibly removed them. Some African Americans preferred to worship at home, rather than endure this kind of discrimination.

Thomas Paul emerged as the first spiritual leader of Boston's black community. He was ordained a Baptist minister in May of 1805. Four months later, he and 20 of his followers established the African Baptist Church. By December of the following year, they had built the African Meeting House. Both whites and blacks contributed money; black workers provided almost all the labor.

The church, writes historian James Horton "was the major black institution outside the home for most black people of all ranks and all stations. . . ."

Boston had a black population of around 1,000 in the early 1800s. Many resided in the North End and in the West End on the north side of Cambridge Street; about half lived on Beacon Hill, where the new Meeting House stood. The church, writes historian James Horton "was the major black institution outside the home for most black people of all ranks and all stations. . . . [It was] a place of education and a place where blacks found spiritual and emotional comfort."

The African Meeting House served many different functions. The African Society, founded in 1796 as a mutual aid and charitable organization, met there. Black children attended school in the basement. In 1826 it was the site of the first meeting of the Massachusetts General Coloured Association, organized by black abolitionists. Six years later, black and white abolitionists, led by William Lloyd Garrison, met at the Meeting House to form the New England Anti-Slavery Society. The church provided a platform for abolitionist speakers, such as Frederick Douglass, and served as a temporary refuge for fugitive slaves. The community gathered there to plan resistance to the Fugitive Slave Act of 1850 and action to end the segregation of Boston's public schools. In 1863 the African Meeting House served as a recruitment center for the 54th Massachusetts Regiment, the first black regiment from the North.

Both whites and blacks contributed money; black workers provided almost all the labor.

Beginning in the 1870s, blacks began to move from Beacon Hill to Lower Roxbury and the South End. By the end of the century, most of the families that had worshipped at the African Meeting House had left the neighborhood; the building was sold to a Jewish congregation, which used it through much of the twentieth century.

In 1972 the Museum of African American History purchased the historic structure. Along with the Abiel Smith School next door, it is the centerpiece of the Black Heritage Trail, which celebrates the contributions of African Americans to antebellum Boston.

On this day in 1638, a ship returned to Massachusetts Bay from the West Indies after a seven-month voyage. Its cargo included cotton, tobacco and, as far as we know, the first enslaved Africans to be...