Aerosmith bassist Tom Hamilton tried to act calm before Monday night's kickoff of the Mama Kin Music Hall, but he kept shaking his head. ''I keep forgetting that we are half-owners of this place,'' he said. ''We're really hanging our butts out. People will judge us personally by this club.'' Well, so far he's got nothing to worry about. The club -- and Aerosmith's national radio broadcast to launch it -- won raves Monday night. The band juggled its song list, digging out archival blues from it s own struggling club days. And Mama Kin was the perfect showcase for it -- intimate and laid-back, with deep, purple-stained booths, red bordello lights and a sound system that was so good even audiophiles had to drool.

Installed by Boston-based Mark Davis, the sound system made you feel that you were at a perfectly tuned Orpheum concert. It was amazing to think that you were instead in a 250-capacity club. Many people in Monday night's crowd were musicians -- from Peter Wolf to James Montgomery -- and the club's stunning sound quality was the foremost topic of discussion.

That's not to mention some of the other touches in this club, which, regardless of Aerosmith opening it (they co-own it with the Lyons Group), is aimed at new, scrapping bands. "There's a dressing room for the band? Wow, at this level? What a concept," said Burt Holman, who manages the Allman Brothers and is based in Boston.

"This is beautiful, man," said a blissed-out Steven Tyler from the stage, as he looked out on a happily dazed crowd that included celebrities from Boston Bruin Cam Neely to WBCN disc jockey Mark Parenteau, but also a number of true-blue fans who won tickets. "Let me thank the lunatic fringe of Boston who made their way down here," Tyler said.

Aerosmith went on promptly at 10:30 (following a gritty set by Tracy Bonham) for a radio broadcast carried by WAAF, WBCN and WZLX. The band went full-speed into the Yardbirds' "Train Kept a-Rollin'," as the sound thundered with pris- tine accuracy around the room. Guitarist Joe Perry then took charge with a savage guitar burst on "Same Old Song and Dance," leading to the jarring "Big Ten Inch," then a steamy new "Walk on Water" (from the recently released "Big Ones").

The concert proceeded at a delirious, high-energy clip. The Memphis standard "Walkin' the Dog" was a nice treat. And so was Fleetwood Mac's "Rattlesnake Shake," otherwise known as "a little tale about self-abuse," said Tyler, who added that he felt the presence of Janis Joplin and Peter Green (of Fleetwood Mac) in the room. No doubt there will be many more presences felt before this spectacular new club (which opens as a rock lounge today, then a live club in mid-January) runs its course.

On this day in 1994, Boston-based rock band Aerosmith opened the Mama Kin Music Hall. In the shadow of Fenway Park, the Lansdowne Street facility enjoyed moderate success as a live music venue before the band sold its share of the business in 1999. Long after their 1970 debut gig at a Massachusetts high school, Aerosmith remains one of the more iconic representatives of modern American rock music. Despite early puritanical laws prohibiting music for secular purposes, Massachusetts has fostered some of the most innovative performers in American music history. The state is home to the oldest music conservatory in the country, the first female principal player in an American orchestra, and a rock star who is also a starting pitcher.

Boston was also the center of a popular revival of ska, a lively blend of jazz, punk, and Jamaican music. 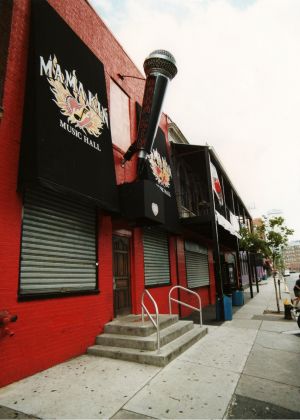 From its puritanical roots — and its choice of square dance as the state's official folk dance — it might be difficult to imagine that Massachusetts knows how to rock and roll. A visitor to the state (an early music critic) once described the sound of singing at an eighteenth-century worship service as a "horrid medley of confused and disorderly noise."

Hearing the music popular among the state's young people today, some might argue that little has changed. Bands like Aerosmith, which helped popularize the arena rock movement of the late 1970s and 1980s, and the Pixies, whose uniquely American punk sounds influenced rock artists worldwide, may have been responsible for many a parent's request to "turn that noise down."

In early Massachusetts, laws regulating the sale of alcohol often linked music to intemperance. While generally regarded as an exaggeration, Samuel Peters' summary of Sunday laws in the eighteenth century included a decree that "No one shall . . . play on any instrument of music, except the drum, trumpet and jewsharp." Moralistic laws against music can be found as late as 1958, when police closed Harvard Square's legendary folk venue Club Passim for allowing more than three stringed instruments on stage while serving food and beverages.

A visitor to the state (an early music critic) once described the sound of singing at an eighteenth-century worship service as a "horrid medley of confused and disorderly noise." 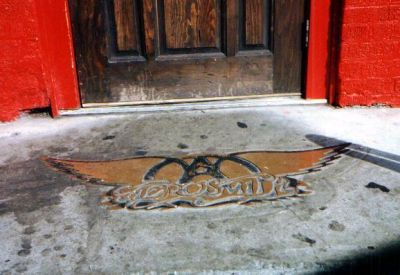 But in spite of official disapproval, the Bay State developed a robust musical culture. It became renowned for public performances, repertory music, and architecturally innovative concert halls. In 1815 Gottlieb Graupner founded the Handel and Haydn Society, one of the oldest continually performing musical groups in the country. Graupner also introduced banjo music and minstrelsy to Massachusetts. The New England Conservatory of Music, established in 1867, is the oldest conservatory in America. Today, the Conservatory's faculty and alumni make up nearly half of the Boston Symphony Orchestra, which was founded in 1881.

Boston was not the only part of the state where musical innovation took place. Northampton's Academy of Music, established in 1890, was the first municipally owned theater in the country and is the only one still operating today. South Shore Music Festival, begun in Cohasset in 1932, is considered the forerunner of summer musical theater. A few years later, the first of the Berkshire Symphonic Festivals was held in Lenox; the festival evolved into Tanglewood, the summer home of the Boston Symphony Orchestra.

In 1945 Lawrence Berk founded the Schillinger House of Music, now known as the Berklee College of Music, to address the need for education in America's popular music, beginning with jazz. Sixty years later, Berklee offers instruction in pop, rock, and other forms of world music, including classical music, as well as in music education, business, film scoring, production and engineering, and music therapy.

Berklee offers instruction in pop, rock, and other forms of world music, including classical music, as well as in music education, business, film scoring, production and engineering, and music therapy.

While Berklee was becoming a degree granting institution, a more informal kind of musical education was taking place in Boston's blues clubs. College students packed into Louie's Lounge, Basin Street, and other spots that earned Roxbury the reputation of being "hot."

During the 1970s, Boston's counterpart to New York's CBGB's was the Kenmore Square club, The Rathskeller. Known to its regular patrons as "The Rat," the club was both shunned and loved by music critics. The Rat was a showcase for seminal punk bands such as The Thrills, DMZ, and The Real Kids. In the 1980s, the club hosted larger national acts such as R.E.M. and Talking Heads. Music fans lamented its closing in 1997.

In 1985 musician Joe Harvard turned an old warehouse space in Roxbury into one of modern music's most influential studios, which he called Fort Apache. Recording with an outdated eight track, Harvard's engineering team began working with local independent rock bands, many of whom played at the Rat. The studio achieved an understated iconic status and recorded some of the earliest efforts of acts that would go on to become star attractions. Two of rock's most influential bands —The Pixies and Radiohead — recorded their first albums at the Fort.

Known to its regular patrons as "The Rat," the club was both shunned and loved by music critics.

Boston was also the center of a popular revival of ska, a lively blend of jazz, punk, and Jamaican music. Bands like the Mighty Mighty Bosstones, the Allstonians, and Bim Skala Bim were principal players in this "third wave" of ska, which peaked in the 1980s and 1990s, and brought renewed national popularity to modern jazz and lounge music.

Massachusetts continues to play an important role in contemporary American music. Berklee is now the world's largest independent music college, drawing over a quarter of its 3,800 students from outside the United States. Aerosmith plays to sell-out crowds at the TD Garden. And while the Mama Kin Music Hall on Lansdowne Street and the Rat in nearby Kenmore Square have fallen silent, you can still hear every Red Sox fan's favorite song, "Tessie" by Boston's Dropkick Murphys, which plays at Fenway Park after every Sox win, along with The Standells' "Dirty Water," an ode to the once polluted Charles River and Boston Harbor.

The Berklee Performance Center is one of MANY venues were Boston residents can enjoy live music.

Boston Radio in the Early 1920s

On this day in 1974, 25-year-old Bruce Springsteen played at the Harvard Square Theater in Cambridge. Although popular with the college crowd in the Northeast, Springsteen was not yet a star. That night, he and...

On this day in 1965, 20-year-old Arlo Guthrie was convicted of littering in the Berkshire County town of Stockbridge, and the song "Alice's Restaurant Massacree" was born. The son of legendary musician Woody Guthrie, Arlo...