In 1915, we had a referendum in Massachusetts for an amendment to the state constitution. By that time, we had organizations in all the big cities and the important towns. But in the small towns we didn't have any contacts. So we got two little automobiles of four workers in each one, and between them, they covered the state spending a day in each community. We'd go there in the morning, and we'd canvass the whole town with leaflets, talking to any of the men that we could catch. If there was a farmer in the field, we'd run out and talk to him, or if he wasn't home, we'd talk to his wife, and leave leaflets for him. We had all these leaflets: "Why the mother needs to vote so she can control the conditions of the education and health that affect her children." "Why the working woman needs to vote so that she can have something to say about the laws." . . . If there was a little local industry in town, perhaps a little sawmill or something, we'd go there at noon and hand out leaflets. . . . If there was an East Podunck and a West Podunck, we'd have one meeting at seven and the other at eight. I was in charge of one of those little automobile parties….

We had a young man who was hired as the chauffeur for our party. Here I was spending all these weeks driving around over the backroads of the state, so when we were going from one town to another, he showed me how to drive. I learned to drive over the worst roads, and the result was I had perfect control of the car. And at that time the only thing you had to do was to send in a sworn statement that you had driven one hundred miles. So I drove one hundred miles, and I sent it in, and I got my driving license.

Two of the most effective bits of propaganda of the referendum campaign were the two great parades held in Boston in 1914 and '15. We made a great effort to have a contingent in the parade of working women. My own special job was to get women laundry workers as one section in that parade… I visited practically all the women's laundries in Boston at noontime, and spoke to the women, and urged them to come out and march in this suffrage parade… We had a working woman's section in our parade. Just why seeing women walk down the street in parade should convince men to vote for suffrage is a mystery, but they did so by the thousands. Probably because it gave them visual proof that the women who wanted the suffrage were ordinary representative women – homemakers, mothers, daughters, teachers, working women – and not the unsexed freaks the antis declared they were.

On this day in 1922, Florence Luscomb announced her intention to run for Boston City Council. As the Boston League of Women Voters representative to the City Council, she was such a familiar figure at City Hall that Mayor Curley referred to her as the tenth member of the council. Her platform called for clean government, careful fiscal management, and more "dignified conduct" at council meetings. When she lost by less than one percent, the Boston Herald reported that "Miss Luscomb made a far better showing than even many of her friends had expected."

Florence Luscomb was among the first women to graduate from M.I.T. with a degree in architecture. 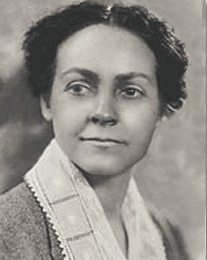 Florence Luscomb grew up in the 1890s and died in the 1980s. During her long life, she embraced and advanced a range of causes from woman suffrage to civil liberties. She was 33 years old when the Nineteenth Amendment finally enfranchised women; she was still active when American women rediscovered feminism in the 1960s and 1970s.

Born in Lowell in 1887, she was two when her parents separated and she and her mother moved to Boston. Her mother was an ardent and active supporter of woman suffrage and other radical causes, and Florence followed in her footsteps. She remembered going as a five-year-old with her mother to hear Susan B. Anthony speak, and she spent many Saturday mornings in the 1910s selling the suffrage paper, the Woman's Journal, outside the Park Street subway station in downtown Boston.

Florence Luscomb was among the first women to graduate from M.I.T. with a degree in architecture. In 1912, she and a fellow MIT graduate formed a two-woman firm in Waltham. They specialized in designing public buildings and housing for workers. Luscomb's profession may have been architecture, but her true love was the woman suffrage cause. Fortunately, her partner was willing to have Florence take the summers off to campaign for the vote.

She remembered going as a five-year-old with her mother to hear Susan B. Anthony speak.

Massachusetts had the nation's best-organized and well-financed movement against woman suffrage, but the state also had a growing number of suffrage supporters. In 1914 and 1915, they succeeded in getting the Massachusetts legislature to approve a constitutional referendum to enfranchise women.

At 28, Florence Luscomb was one of the movement's most experienced suffrage campaigners. In the months before the referendum, she and a small group of friends set out on an automobile tour. In Gardner, a Worcester County town with "no suffrage organization at all, and active hostility on the part of the aristocrats," they drew a "decidedly friendly" audience of 500. In North Attleboro, 20 people attended the "Antis" rally, while a stone's throw away, an outdoor pro-suffrage meeting drew 150 men. In 19 weeks, Florence Luscomb gave more than 220 speeches.

In spite of the vigorous campaign waged in support of the referendum, it lost by a 2:1 margin. Massachusetts women were not enfranchised until the federal constitution was amended in 1920.

When World War I caused a building slump, Luscomb gave up architecture to become executive secretary of the Boston Equal Suffrage Association. She helped organize and was president of a Boston local of the United Office and Professional Workers of America. She held paid positions with the Boston League of Women Voters, the Massachusetts branch of the Women's International League for Peace and Freedom, and organizations concerned with prison reform and factory safety. 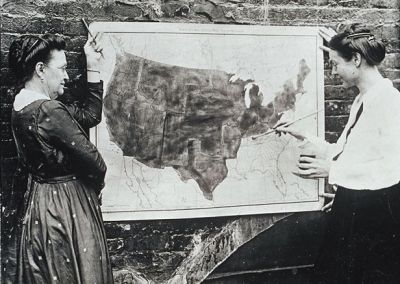 Beginning in the 1920s, she served on the board of various civil rights, civil liberties, and other liberal organizations, including the NAACP and the Massachusetts Civil Liberties Union. After her mother's death in 1933 gave her a measure of financial independence, she became a full-time social and political activist.

Florence Luscomb ran for public office four times, beginning with a race for Boston City Council in 1922. As the Boston League of Women Voters representative to the City Council, she was such a familiar figure at City Hall that Mayor Curley referred to her as the tenth member of the council. Her platform called for clean government, careful fiscal management, and more "dignified conduct" at council meetings. When she lost by less than one percent, the Boston Herald reported that "Miss Luscomb made a far better showing than even many of her friends had expected."

She did less well in her campaigns for the U.S. House of Representatives in 1936 and 1950, when her goal was to educate voters and expand the two-party system. In 1952, she ran for Governor of Massachusetts as the candidate of the Progressive Party, a third party that opposed the anti-Communist policies of the Truman administration.

She was outraged that "the American government has the nerve to talk about iron curtains."

She fought McCarthyism and was called upon to defend herself before a committee of the Massachusetts legislature. In her pamphlet "Blacklisting the Constitution," she condemned the anti-Communist investigations as un-American attempts to suppress dissent. The State Department confiscated her passport without explanation as she was about to depart for a peace conference in Vienna in 1952. She was outraged that "the American government has the nerve to talk about iron curtains." In the early 1960s, she wrote the first anti-Vietnam War leaflet distributed in Boston and visited both China and Cuba.

When 1970s feminists turned to her as a "foremother," she encouraged the new movement to be inclusive. Just as she had once urged labor unions to organize women workers, in the l970s she reminded feminists to reach out to poor women and women of color. A lifelong radical, at age 90 she was living in a Cambridge commune. An avid outdoorswoman, she climbed Mt. Washington five times, once in winter. She lived to be 98 years old.

Florence Luscomb is one of six women included in "Hear Us," a work of art installed in the State House to honor the contributions of women to public life in Massachusetts.